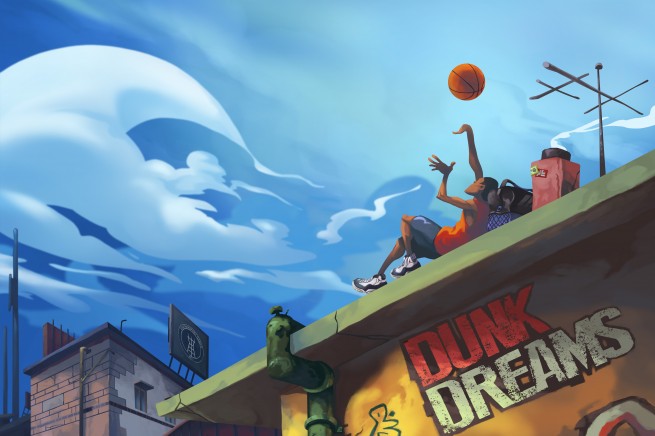 I love discovering new games on my own, but I think I like it even better when we dupe scores of developers into pitching their games directly to us.

That’s what we did with our “Pitch us in one Tweet” contest. We encouraged the gaming industry’s independent studios to convey the gist of their creations in less than 140 characters. Turns out that brevity is the soul of learning about tons of cool new games in a short amount of time.

Our team has combed through the submissions and picked our favorites pitches (some of the games are pretty good, too). We’ve already talked about picks 10 through 6. Let’s kick off the top half of this list.

Availability: In development for iOS and Android

Why I picked this: Look, I’m a simple man. If you want to win my vote in any contest, simply reference burritos, Kirby’s Dream Course, or White Men Can’t Jump. This Tweet built an instant mental picture of a street-ball league filled with Wesley Snipe/Woody Harrelson-like characters grinding away to improve their dunking stats. I want to play that.

What is it? It’s a role-playing basketball game from San Francisco-based developer Brothersport. Players create their own baller who starts as a high-school scrub who lives with his mom but aims to be a star in the pros. Gameplay is a mix of real-time action and strategic turn-based mechanics. It employs a simple-to-understand paper-rock-scissors design, but it also has plenty of RPG-like items to improve skills (think skinny jeans that add +10 to the jumping stat).

The character classes include shooter, slasher, or big man. Big men are dominant under the hoop. Shooters have an advantage from the perimeter, and slashers are decent at both. It’s your basic skinny, normal, and fat classes from the NES Ice Hockey game.

Each sequence plays out like the 8-bit football classic Tecmo Bowl with Super Mario RPG elements. Players drag their character into position and select one of three plays (drive to the hoop, jump shot, or dunk) and then executes the play with a timed screen tap. The defender also chooses from three countering plays. Dunk Dreams’ artificial intelligence then rolls the dice, taking into account character stats, play choices, and the timing of the screen tap to determine if the shot goes in.

Is it good? I didn’t play it since it’s still in its early stages, but I’m definitely into what Dunk Dreams has to offer. I breathed a quiet sigh of relief when I learned Brothersport didn’t resort to emulating a controller with on-screen buttons. I laughed out loud at the writing when developer John Robinson beat a Carmelo Anthony-like character called Melotron, and the game gave him the option to send “Melotron owes me a card next Father’s Day” to his social networks.

Let’s just say that I hope it will be good when I eventually download it.

Look for it: on iOS and Android sometime in early 2013.

Check back tomorrow for our #4 finalist in our “Pitch us in one Tweet” contest. You can follow this tag link to catch all of the top 10.