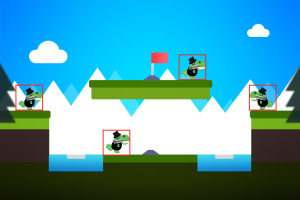 This is, by far, my favorite feature we’ve done in my (admittedly short) time at GamesBeat and VentureBeat. Has the process taken a lot of time? Yes. Did we get a lot of response from developers eager to “Pitch us in one Tweet?” We sure did. And it’s totally worth the work of sifting through all those entries.

“Pitch us in one Tweet” is grounded in the foundations of our publication: finding new startups and telling the world about them. I’m proud that we’re doing this, and I’m eager to see the finished products that come from these pitches.

And after reading the entire series, I hope you are, too.

Availability: In development for iOS (iPhone and iPod Touch) with a release date no earlier than March 2013.

The pitch: @MattStenquist: “T-rexs with miniguns that shoot rainbows while panda bears with lightsabers attack you on flying narwhals.”

Why I picked this: You really must ask me this after reading the pitch? Who wouldn’t pick it? The only things that could make this better are monkeys with rocket launchers riding sharks with laser beams on their heads.

What is it? Sir Gentleman (this sounds classier than calling it “Backyard Rumble” or “SGBR”) is what happens when you mix capture the flag with the wackiness of Cartoon Network’s hit animated show Adventure Time. Power-ups drop from the sky to give your character a hand as you battle for the flag. Other players sometime drop coins. Gather this currency and use it to buy new characters: wackos such as “Bamboo Panda,” “Kangaroo Joe,” and “Unicorn Narwal.” Each of these crazies possesses special abilities. Sir Gentleman Rexasaurus sports miniguns on his back that fire killer rainbows instead of bullets. Bamboo Panda hits hooligans (aka “other players”) with a bamboo stick. The game comes in two modes: survival/high score and progression.

Oh, and cheeseburgers fall out of the sky.

Is it good? Sir Gentleman sounds wackier than your Aunt Francine after a fifth of whiskey (OK, maybe my Aunt Francine, not yours), but since it’s only in development, I can’t tell you if it’s good or bad. (The screenshot above is mostly still placeholder art.) Figures that I’d be the one to pick the game that isn’t ready yet. Talk to me after March 2013’s Games Developer Conference. Stenquist plans to have it ready by then to show it around.

Look for it: On Apple’s App Store once it comes out.

Check back tomorrow for the #8 finalist in our “Pitch us in one Tweet” contest. You can follow this tag link to catch all of the top 10.