The PAX Prime show’s humble beginnings started with indie games, and while today it’s filled with major game developers and publishers, the indie scene lives on in the PAX 10 and PAX as a whole. But even games outside of the PAX 10 — ten indie games that Penny Arcade founders Jerry Holkins and Mike Krahulik themselves choose for the honor — impressed this year for the first annual Gamesbeat Best Indie Games of PAX award. 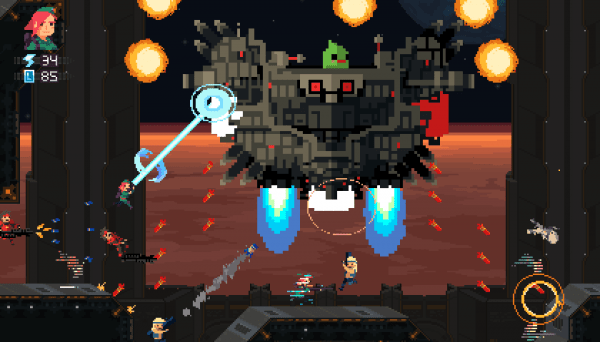 Super Time Force wasn’t the silliest indie game at PAX, but it certainly is one of the strangest. A unique twist on the time-travel gameplay mechanic, players take command of one character until they take a single hit. Yes, it may be the most realistic game there was at PAX; a single shot, burn, scratch, or dirty look will kill the player. But therein lies the crux of the game.

Instead of getting a game over screen, players start back at the beginning with the same character or a new one with the opportunity to play through the exact same level. Only one difference: your previous incarnation is still there, doing exactly what you did the first time. Nothing players do is lost, though the entire game is a constant race against both time and from stray enemy fire. With a single shot to knock players out and only 30 lives, as well as 30 second to make it through any level (killing enemies and saving previous incarnations and then collecting them adds more time), this isn’t an easy game.

But it does one thing really well, and that’s turn the traditionally annoying start-from-the-beginning-again misery on its head. Players can employ strategies to intentionally die so they have certain characters using their strengths in one section of the map, and others covering another group of baddies simultaneously. In a sense, players can control an army single-handedly with time as the greatest ally.

In the demo revealed at PAX, there were four playable characters, though Tech Director Kenneth Yeung told me that there will be plenty more when the game releases as an XBLA exclusive in the first half of 2013. The four available include a soldier with an assault rifle, rocketeer, sniper, and a heavy armor character with a shield. Others will include different sorts of human characters with different weapons to strange avatars like a velociraptor. Yeung also talked about the potential for local co-op, but said that currently the game is a single-player experience.

Super Time Force is one of those weird games that has really fun gameplay for both expert players and beginners. Your gameplay style really makes a difference, but there’s enough leeway for both extremes to make it enjoyable no matter who you are. 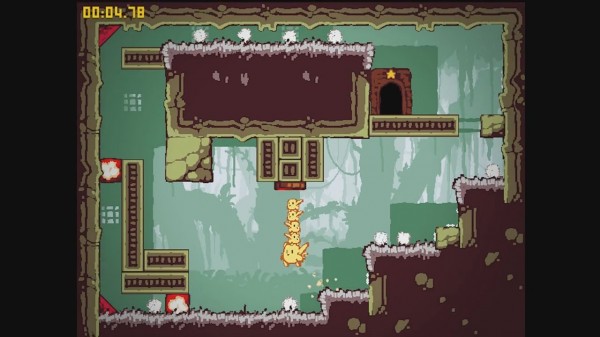 Offspring Fling is one of the few games at PAX this year that is already out and still part of the PAX 10, and I can see why. Not only are the levels unique from one another, the entire game is a brilliant smorgasbord of varying missions that require equal parts ingenuity and dexterity. Creator Kyle Pulver built the game like a high-quality SNES title, with simple controls and gameplay mechanics, and even 8-bit design, but it still looks awfully cute and is fun to play.

As the only title in our top five that’s actually out, instead of reading about it, go ahead and give it a try for yourself on Pulver’s site for the game, and see for yourself the kind of game it is. A steady balance between 2D platforming and old-school controls with the speed of today’s games, I really enjoyed my time playing, and had trouble putting the controller down. And once players go through the 100 levels, they can make their own levels using the included level editor for anyone to play. Offspring Fling is one of those hidden gems that I’m really glad was picked for the PAX 10, because otherwise it may have been lost in indiepocolypse forever. 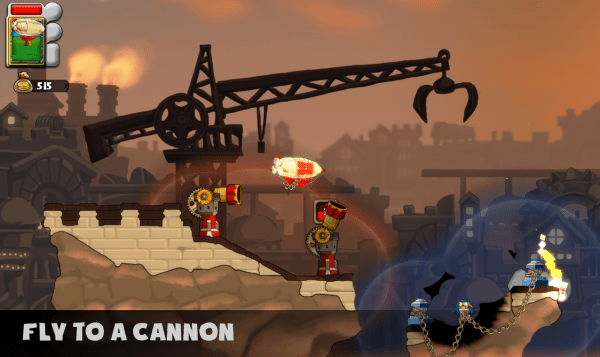 What do you get when you make a real-time strategy (RTS) game simplified down to what you can see on-screen. You get a few dozen units, and the ability to control only one tower at a time. Cannon Brawl is exactly that, an Xbox Live Arcade title that is still pre-alpha and doesn’t have a release date. But I thought it was one of the most fun games at PAX.

Players control a blimp that builds atop an entirely destructible and tiny battleground in a one-on-one match. The one playable map had a three-level system, with players starting out on the bottom with the option to move up or out, or both. Building new units requires both ground and influence, essentially the fog-of-war in this 2D RTS. As the game progresses both players can upgrade gun emplacements, defenses, and other structures to boost their strength and take down the enemy.

What really makes the game unique is the fast-paced design through tiny levels, and the destructible environments. One weapon, a laser beam, can literally blow strips off the map entirely, ruining any structure above it. Conversely, defences can actually block both above and below ground, so the strategies deployed don’t only protect towers directly, but also the foundation they rest upon.

Then there’s the actual control mechanic. Unlike traditional tower shooters, nothing is automated. All towers require commands from the player, so speed is essential. If you’re slow, your opponent will get the upper hand just because he can inflict more damage over time than you can.

It may sound like a poor man’s RTS, but Cannon Brawl has every aspect of the genre narrowed down to its simplest form, which makes it incredibly fun to play and offers both quick games and a lot of replay value. Which, for anyone who doesn’t have hours to spend on a single skirmish, can be a lifesaver. 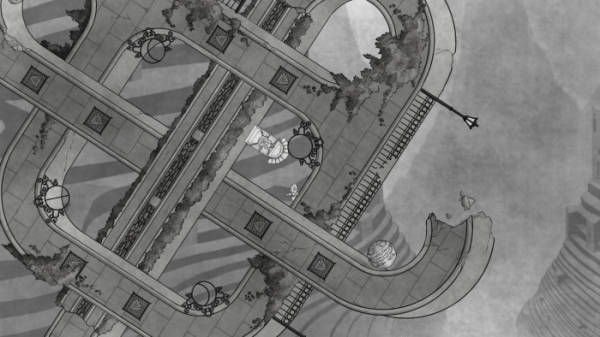 The best puzzle games are the ones that make you change your perception, if only slightly. They push our mental boundaries, sometimes to the point where we do the same thing over and over again knowing that the solution is so close, but that we just can’t see it. The Bridge is one such game.

As the best of the PAX 10 titles, The Bridge follows a strange old man through 24 levels where players manipulate the entire field of play to get the old man from the start to the end of the level. This travel from point A to point B is never so simple, requiring further and further level manipulation, from simple movement mechanics to contorting gravity to turning entire maps in circles. Dimensional shifts and changing gravitational direction are just two of the categories of gameplay spread across the four main worlds of the game.

I watched several PAX attendants play, and they ran into trouble quickly and frequently.

That’s not to say that the game is difficult or that attendees aren’t the brightest bunch, but the game requires a sensitivity to other perspectives, and the ability to see things in a different way. Sure, a convention show floor with tons of dub-step, commotion, and people may not be the best place for a puzzle game, but it did point to the difficulty of the title.

Discovery plays a major role in The Bridge. Learning to manipulate gravity isn’t hard…but determining how to best use it is. The same applies for every other puzzle type. Discovery is also amplified thanks to the art direction, a simple black and white stenciled look that has a very M.C. Escher feel to it.

Scheduled for release in the first half of 2013, currently only for PC, The Bridge will offer double the brain teasers with a “hard” mode after players complete the game, with all of the levels redone to make them much more difficult. I can’t wait to throw my controller at rage at this one. 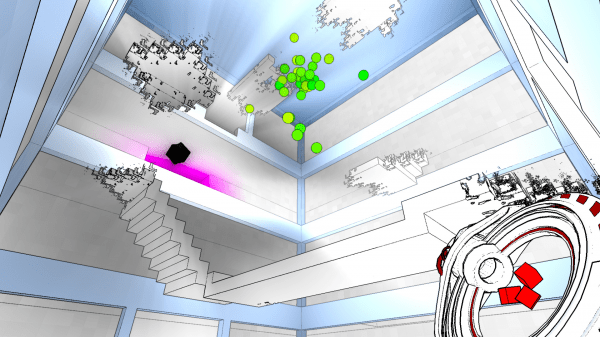 It has won numerous awards since first coming onto the scene in 2009 (having been in development since 2006), and was even in last year’s PAX 10. Anti Chamber is a first-person puzzler that, like The Bridge, uses discovery as a game mechanic. The difference here is that in Anti Chamber, Discovery is the main mechanic, and the only one that really matters.

Running on Unreal Engine 3 and set to finally release this year (creator and designer Alexander Bruce stated that the game is done except for some polishing), Anti Chamber is unlike any game I’ve ever seen. “Learning is the core mechanic,” Bruce told me during the show, after I’d played through a significant portion of the game’s beginning. “Everything else is just there for that.”

Anti Chamber gives little instruction, only nudging players in the right direction with simple pictures and one-liners that sound more like Yoda-isms than tips. The very beginning of the game has players read a sign that says “jump”, and a ledge to reach. It’s impossible to reach, and just like the Matrix, “everybody falls the first time.” “But there’s nothing wrong with failing…that’s part of the discovery.” And Bruce is right. I watched as several attendees were confused, but suddenly much more interested because they were thrown off course.

Every aspect of Anti Chamber is made to get players out of their comfort zone. A set of infinite stairs going both up and down is confusing at first, but when players realize that they have no choice but to go back the way they came, they see that it’s no longer the same path. Or that looking at a door makes it close, so walk backwards through the doorway to get through. These tasks are so easy in hindsight…which is the surest sign that it’s the best kind of puzzle.

The game, which according to Bruce can be completed within seven to ten hours but in the right hands in as little as three, requires a lot of lateral thinking. Every aspect of the game I’ve seen promotes that, from the basic color scheme and blocky design to psychedelic rooms meant not to confuse, but to lead players to the correct path. Later on matter manipulation is introduced, but perhaps that’s a mechanic best left for players to discover on their own when Anti Chamber releases later this year. Look forward to it.