Fortunately, the latter rarely gets in the way of the former. You’ll enjoy making your way through the varied first-person shooter knockoffs (and non-FPS games entertainingly turned into that genre) just for the reward of hearing more of the lead character and her opponents.

Bedlam releases today for PlayStation 4 digital download, PC, and Mac and Friday for Xbox One digital download. I reviewed the Xbox One version with a standard controller. RedBedlam developed the game, Christopher Brookmyre wrote it (more on him in a moment), and Vision Games published it. It costs $20 regardless of version.

That story, and especially that dialogue

You play as Heather Quinn, a fine videogaming name (ahem) belonging to a delightfully foulmouthed and witty Scot — think Merida in Brave with more attitude and fewer self-filters. She goes by the gamertag Athena. 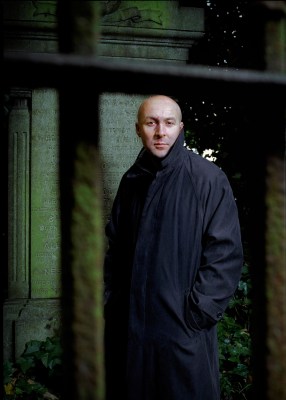 Above: Christopher Brookmyre isn’t in a video game here … we think.

Her employer, the medical scanning company Neurosphere, traps her inside a series of video games on her first day of work. Bedlam is based on Brookmyre’s 2013 novel of the same name, and the protagonist from the book appears as a character in the game. (Brookmyre writes primarily crime novels and is also a witty Scot.)

You zap from game genre to genre using glitches. Starting with a Doom-type parody and later to Call of Duty and PlanetSide clones, you’ll march through FPS tropes. You’ll also branch out. You experience a role-playing game, Pac-Man, and Defender clones as shooters, for example, which turns out to be fairly amusing.

Each level contains its own satire, sharply written and loaded with in-jokes for anyone who played the original games. The overall story creates some intial interest, but the snappy repartee throughout the gameplay keeps Bedlam moving right along.

The only mild writing disappointment proves to be the weak ending, which I won’t spoil here.

RedBedlam posted a blog entry suggesting that this game would be the first in a trilogy based on the novel and its planned sequels. I haven’t read the book though it’s earned a spot on my list based on this game, so I can’t say how much story is really left to tell after Bedlam is over. 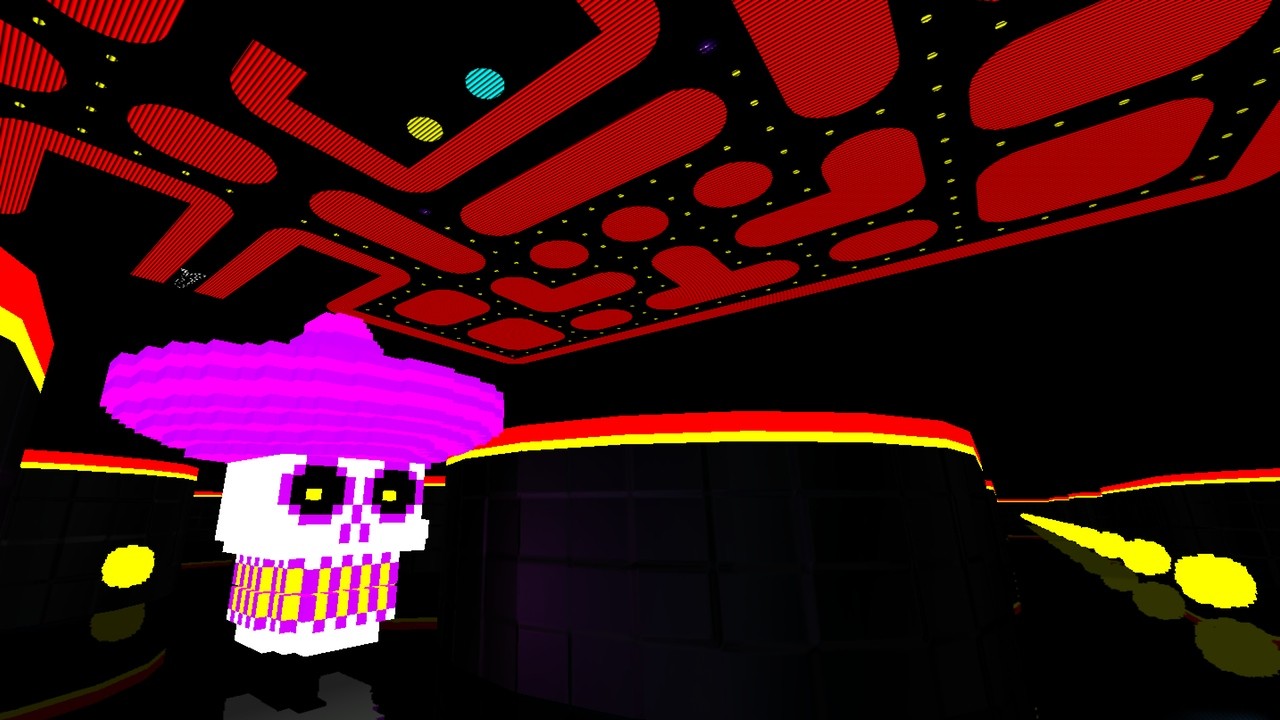 Above: Bedlam’s Chili Chomper, its version of Pac-Man. The 2D map is above your head; you eat dots and chilis and shoot monsters in 3D below.

Quinn’s accent, as played by Scottish actress Kirsty Strain, sounds incredibly charming: Frankly, there is nothing like hearing a Scotswoman swear. Strain delivers her dialogue crisply and with effective humor.

Quinn’s antagonists and allies, all tropes taken from the game genres Bedlam sends up, frequently achieve levels of laugh-out-loud fun. Right from the start, the alien bad-guy general — your boss — will make you chuckle with his outrage over the resistance of the human population, who they’ve, yes, enslaved and slaughtered, but still, it’s the principle of the thing. 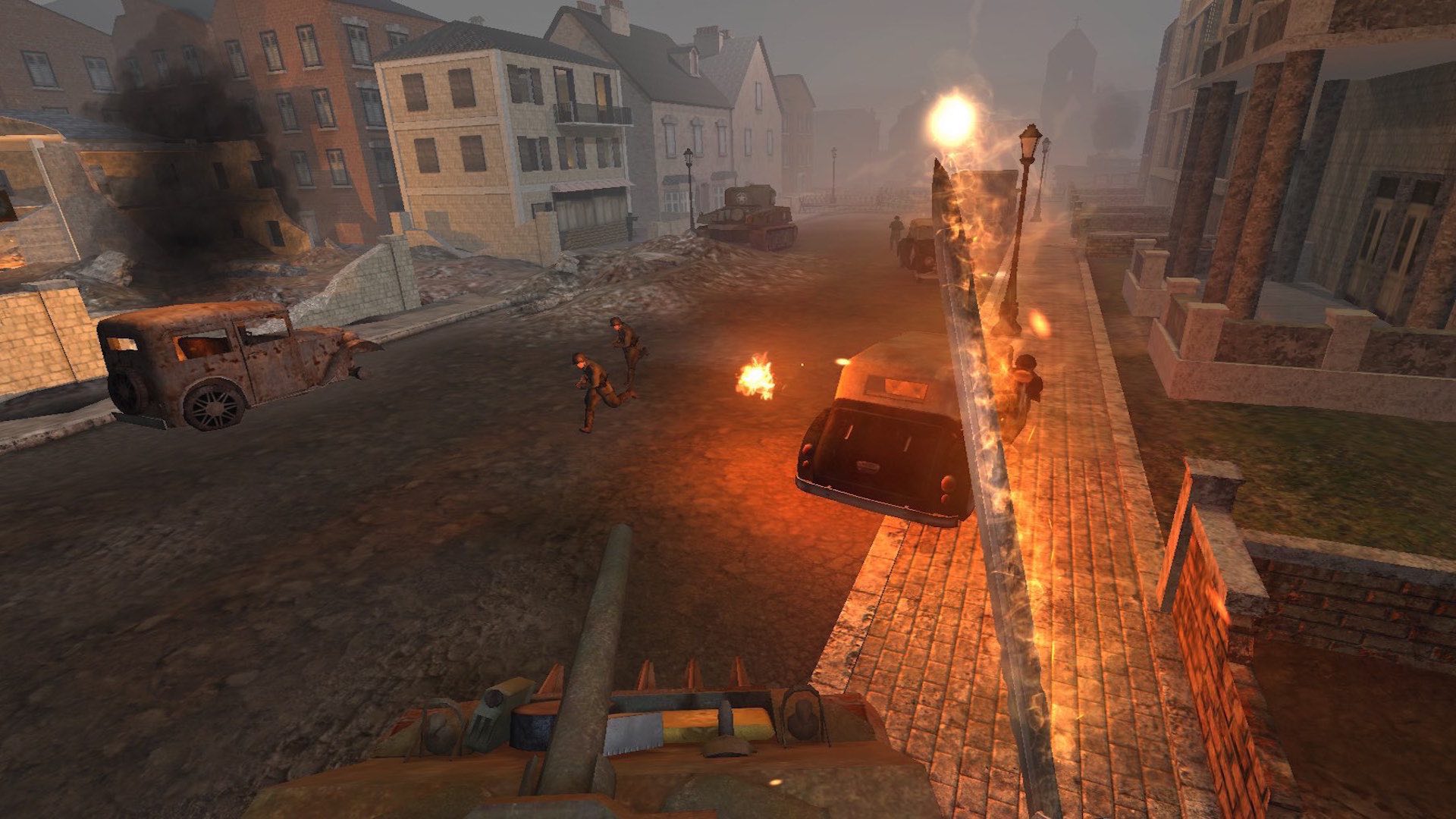 Above: Getting to use weapons from one game in another — like this flaming fireball-spitting sword in a Call of Duty-like setting — adds to the humor.

Combined with writer Brookmyre’s terrific understanding of gaming-related dialogue and jargon, they make a delightful recipe for shooter comedy.

One of my very favorite scenes comes very early, when you’re plunked inside a Quake 2-style deathmatch with prepubescent boys who complain about bugs and hacks when you hit them and tell you how terrible you are when they manage to hit you.

I think I’ve actually had one of the conversations the boys have with Quinn — “You’re a girl? Go back and play The Sims!” — right before she sends them to hell and tells them she’s been playing since they were in diapers. All right, perhaps I’m relating a bit too much to the main character here, but still tremendously funny stuff.

Warning: This trailer doesn’t do the dialogue justice.

You’ll start the game playing a Doom-like alien shooter in which you play the alien. Your enemies look like they’re made out of a few hundred pixels each, max. The landscape has that blocky, crudely textured vibe you remember, with the same plant plunked here and there over the hills as “flavor.” Every door is the same; every enemy is the same; there is no good texture that goes unrepeated.

As you move through the game genres in Bedlam, you’ll take a few steps forward with the tremendous graphics of later-generation shooters and a few steps back in the arcade-game mash-ups. Bedlam never achieves present-day standards for graphics presentation, but it does a highly respectable job with some late-retro send-ups. 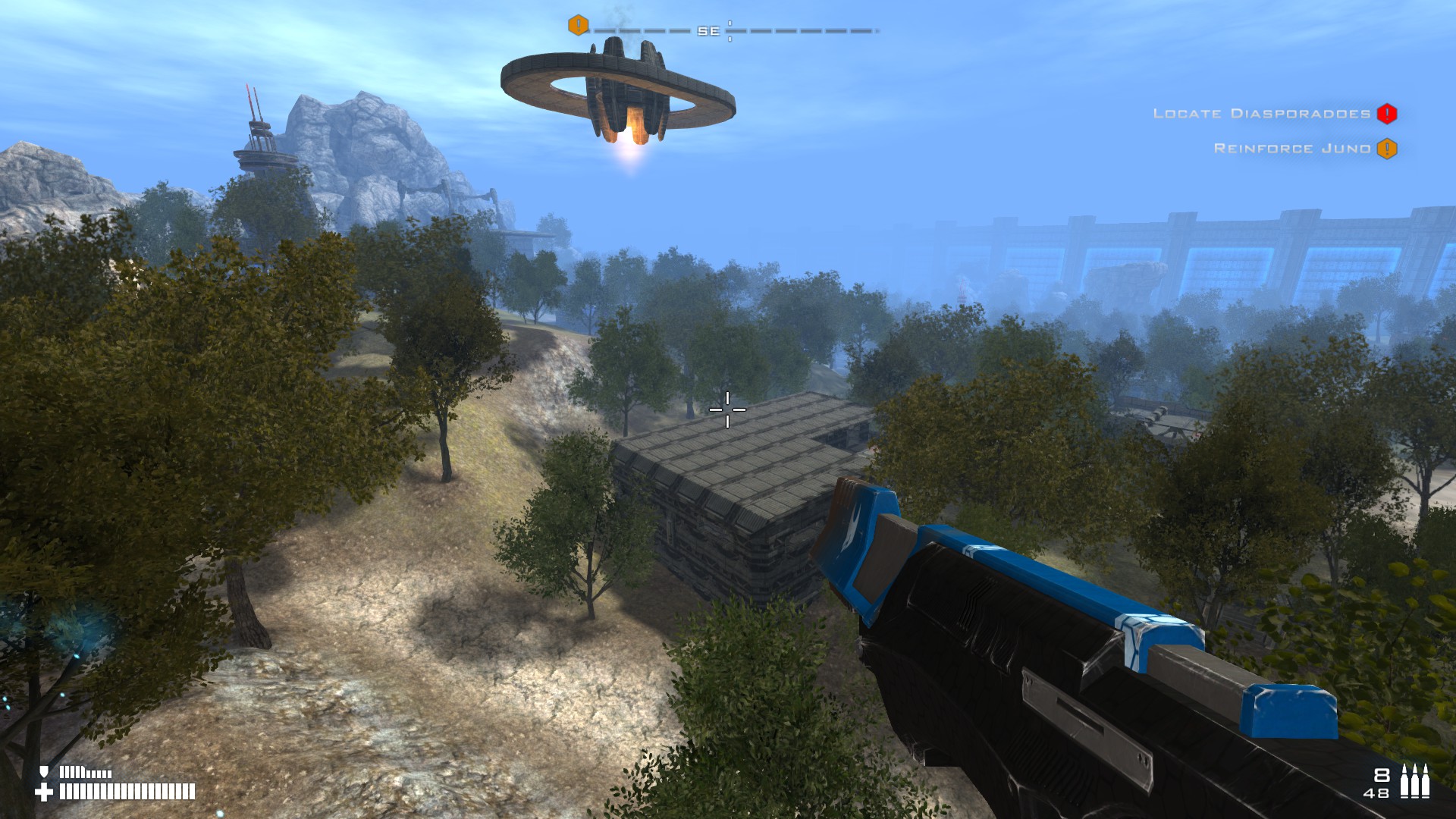 How incredibly long it takes to turn around

The controls in Bedlam are crude from the start, which fits that blocky 90s aesthetic. Unfortunately, they don’t get better as the game goes along. Movement is quick and smooth, as is jumping, though it always feels a little low-grav. Aiming and shooting, on the other hand, are a trial with the Xbox One controller.

Strafing is quick, and you can actually move fast enough to dodge bullets, so you’ll use it a lot. But turning to find someone shooting behind you is paiiiiiiiinfully slow, and if you make the mistake of standing still, you will frequently end up at half health before you’ve gotten a bead on them.

I’m also a bit spoiled by modern console shooters, which may not have the precision of their PC counterparts but manage to deliver something like that feel with thumbsticks and trigger. Not so here; even with sticky targeting turned on, moving the reticule felt slow and sometimes jerky, which meant I did a lot of dodging interspersed with shooting. 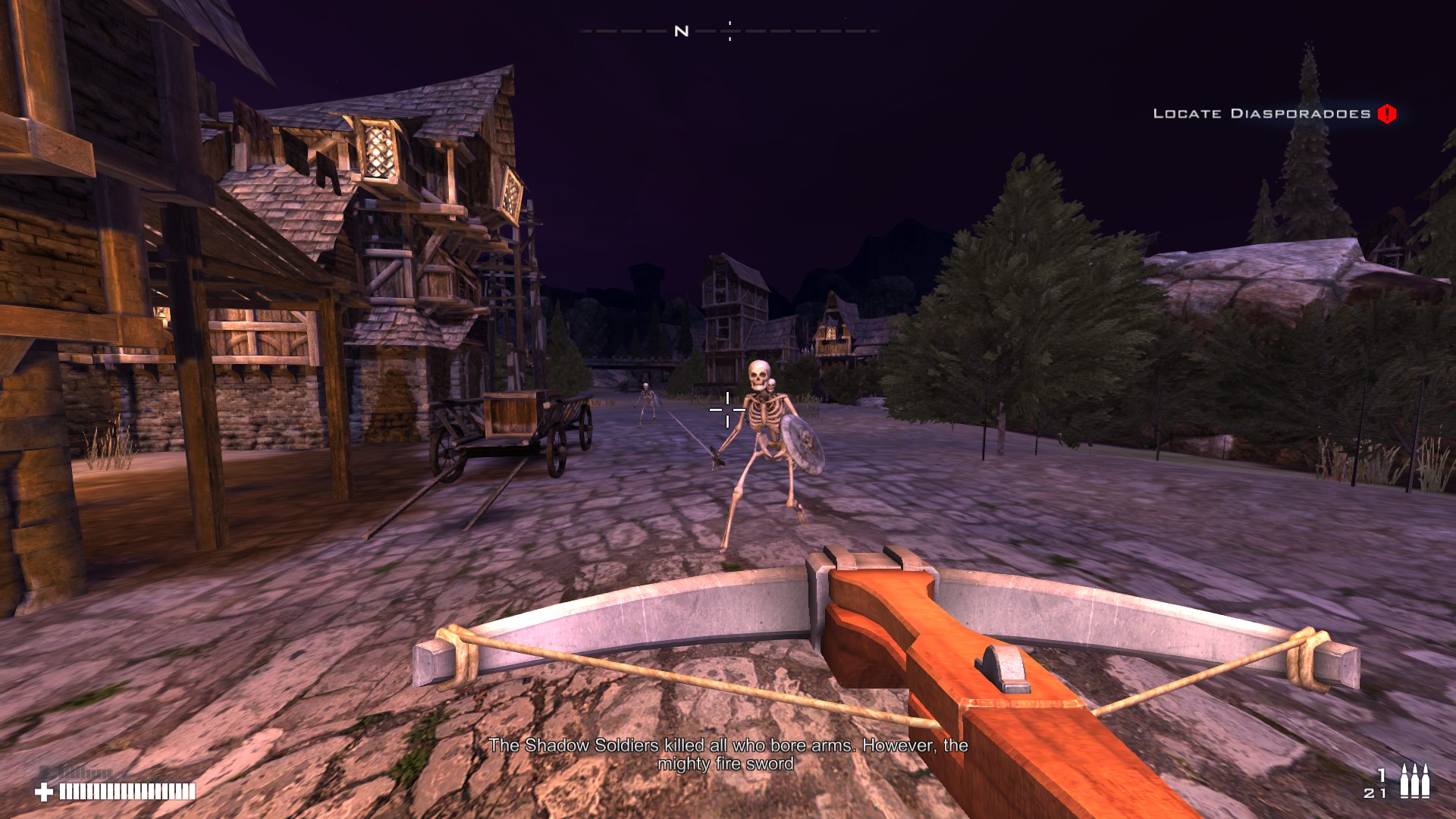 Above: But on the bright side, you finally get to do what you’ve always wanted in a role-playing game: shoot things.

These enemies need a brain transplant

The folks at RedBedlam make it very clear that they deliberately created the enemies in the older game genres stupid to match the primitive A.I. at the time. Fair enough, but that doesn’t explain why villains later in the game were still happy to round the corner one at a time directly into my line of fire.

Because you move so quickly and the shots fired in the game move so slowly, you can dispatch most of those you have to kill by jumping around like an overcaffeinated frog to avoid their bullets while you shoot and the rest by making them angry and hiding around a corner until they come to play. 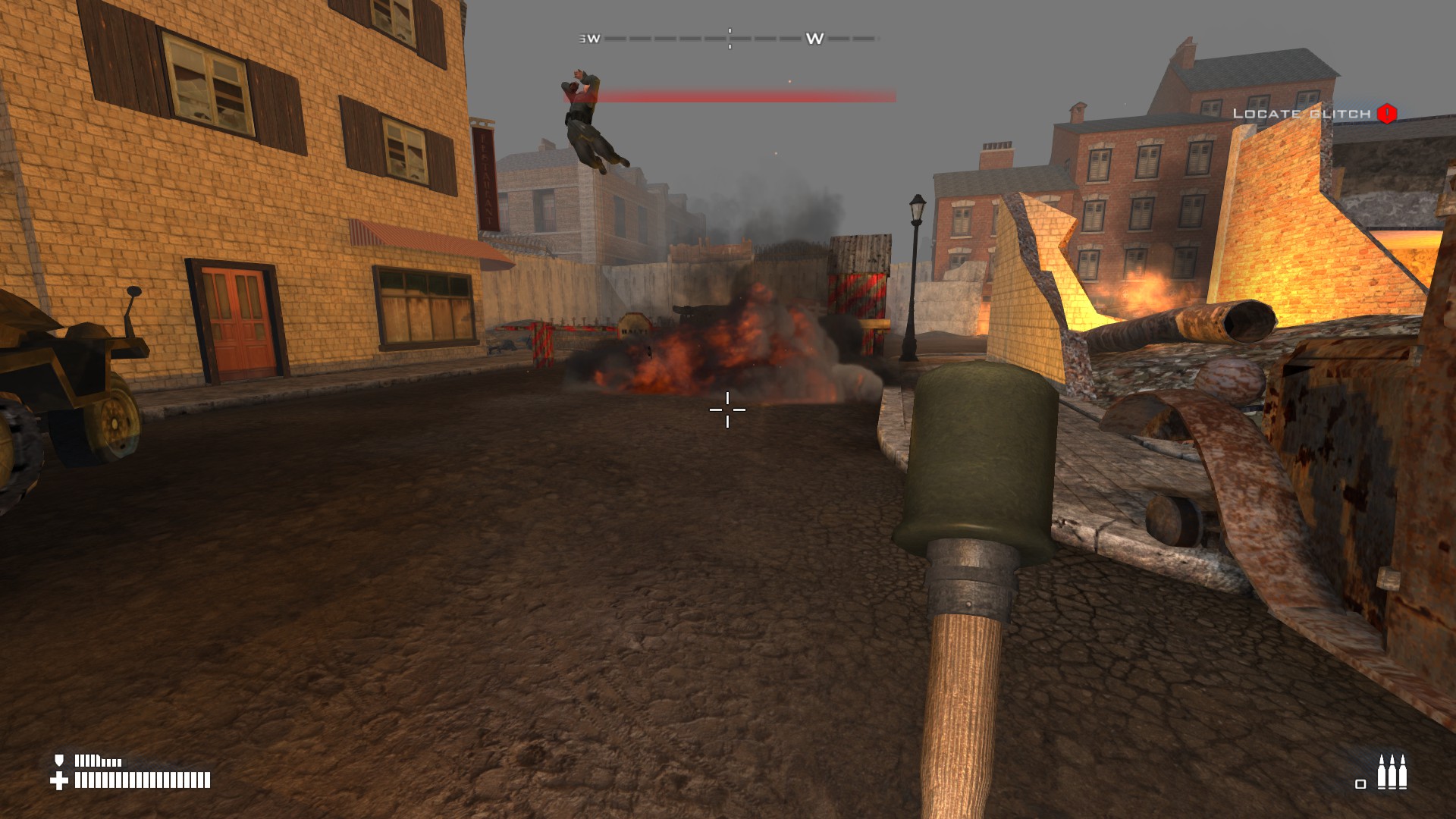 Above: Say hello to my little explode-y friend.

I won’t deny that bouncing and picking off piles of enemies in a row carries some charm, but after a few hours, I began to long for bad guys that would intelligently take cover or box me out of my hiding place.

Some bugs crawled into the final product

Bedlam’s bugs are legion: Enemies swim, half-submerged, in the ground. People clip through or are enveloped by objects. Things you touch mysteriously launch you up or several paces over — not on purpose. Bosses get stuck on things, not firing, until dead. You get stuck on things.

Clearly, this game doesn’t have the spit-polish of a triple-A console or PC release. But I found myself lumping in the crazy bugs with the terrible A.I. and the crude graphics as part of the nostalgic appeal.

I’m not saying they should be there; they clearly detract from the experience. But I didn’t mind them as much as I might have because of the retro feel of the game as a whole — and some lingering suspicion that some bugs were left in as “too much like the original game to pass up.” 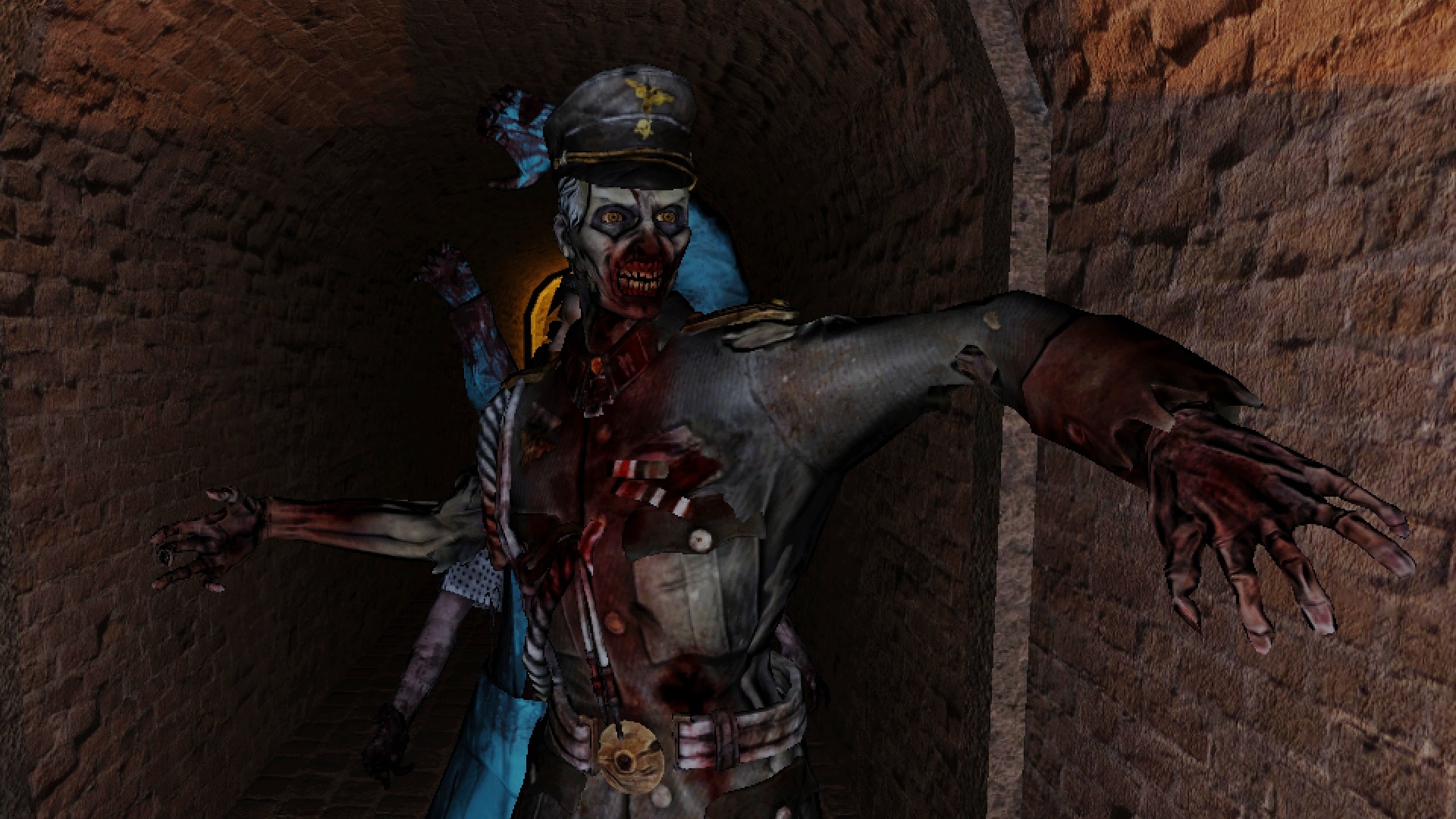 Above: Wouldn’t you expect some bugs to live in the zombie sewer level?

Bedlam offers average shooter gameplay at best, but the send-ups of the genres it inhabits makes you strangely tolerant of its flaws. Heather Quinn earns a spot as one of the best video game heroines ever, by virtue of tremendous writing and some stellar voice acting, and her story makes the game worth playing, even if the end wraps things up in lackluster fashion.

I don’t know if I’d truly enjoy another full day of average — even squishy — gameplay with a second or third chapter of Bedlam, but I’d certainly think twice about the opportunity to spend more time with Quinn.

Bedlam is available today for PlayStation 4, PC, and Mac and releases Friday, October 16 for Xbox One. GamesBeat was given an Xbox One code to use for this review.