Within the global entertainment business, games look pretty good. The U.S. video game industry revenue is expected to grow at a compound annual growth rate of 3.6 percent from 2015 to 2020, according to a new report by PwC. And the global video game industry is expected to grow even faster, at a CAGR of 4.8 percent from $71.3 billion in 2015 to $90.1 billion in 2020.

Meanwhile, the U.S. entertainment industry is going to grow at a rate of about 3.7 percent per year. Video games will grow faster than other larger segments such as TV and video (growing 0.5 percent CAGR), music (3.2 percent), cinema (1.2 percent), and books (2.9 percent). But it is growing more slowly than Internet access (7.1 percent), Internet ads (9.4 percent), and out-of-home advertising (4.3 percent).

One of the reasons that gaming is thriving is that it has so many segments. PC gaming is expected to grow at a rate of 6.3 percent per year through 2020. That is being driven by outstanding games such as Riot Games’ League of Legends and other popular action titles, said Chris Vollmer, a strategist in PwC’s global entertainment and media business, in an interview with GamesBeat.

“The growth driver is more digital purchases on the consoles and PCs,” Vollmer said. “We see more microtransactions around expansion packs, extra content, subscriptions, and other items.”

He added, “The growth in online microtransactions is really robust. A big part of the story going forward is how game companies figure out revenue per user with some of the bigger franchises. FIFA is popular. That’s why there is a great upside opportunity. The action genre. The shooter genre. They’re all ripe for innovation around the business model. If I was a game publisher, I would think more about social community and peer-to-peer connections and a network for a specific property and create more connectivity.”

Above: Games have a healthy growth rate within the global entertainment industry.

Traditional console games are expected to grow from $13.9 billion in 2015 to $16.1 billion in 2020. Such games will be 79.2 percent of the overall U.S. game business in 2020, down slightly from 81.7 percent in 2015. Overall console revenue remains relatively steady, partly because the console brands’ ambition of being the living room entertainment hub has been beaten by smart TVs and set-tops boxes.

“It’s become apparent over the past year that console makers’ vision of the game console as the control room of living room entertainment is unlikely ever to be realized,” the report said. “Although all modern consoles run the major channels’ catch-up apps, such as Amazon Prime Video and Netflix, so to do an increasing range of set-top boxes (STBs), smart TVs and even ‘casting’ smartphones — thus this is no longer a differentiator. The success of third-party services also means that Sony and Microsoft’s strategy to own the film rental service or directly facilitate catch-up services has not come to fruition — there will be little new revenue there — and, unlike Apple or Amazon, it’s too late to bar those successful competing services from your platform.” 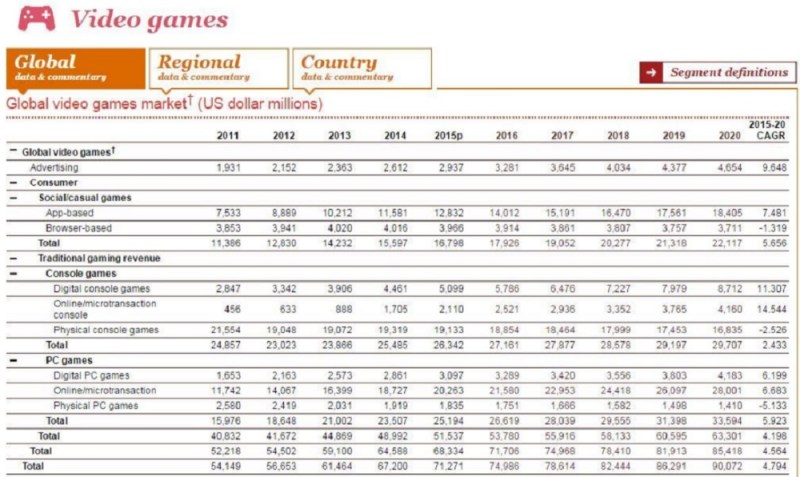 Above: The global game business has a healthy growth rate through 2020.

Vollmer said he was impressed at the ability of console and PC game makers to grow their businesses through digital add-on content. That includes examples such as Electronic Arts’ FIFA Ultimate Soccer, where players can purchase digital items via microtransactions. Such digital revenues are growing fast and are helping companies deal with a drop in sales of physical media. Services such as Steam and Origin are thriving on the PC. On the PC, U.S. online microtransaction PC games are expected to grow at a 7.1 percent CAGR, from $2.7 billion in 2015 to $3.9 billion in 2020.

That means that PwC doesn’t think that mobile gaming is going to take over. This category is probably why there is such a big difference between PwC’s numbers and those of other market researchers.

The numbers differ from those thrown about by market researchers Digi-Capital, Newzoo, and SuperData. But each firm has its own methodology, and PwC has been doing its Global Entertainment and Media Outlook reports for 17 years, based on historical and forecast data in 13 major industry segments and 54 countries.

“League of Legends is part of the PC resurgence,” Vollmer said. “But when it comes to esports, the sports games haven’t broken it out yet.”

Virtual reality, esports, and other new segments are too small to be broken out now, but Vollmer said they will be interesting to watch over time. Video game revenue is expected to grow at a 9.6 percent CAGR from $1.1 billion in 2015 to $1.8 billion in 2020.

“The mature nature of both gaming and advertising in the US means this opportunity is being explored more than in practically any other market. It is also an effect of the highly fragmented media landscape in the US; high DVR ownership, high social network engagement and low newspaper readership drives advertisers to seek out brand message and partnership opportunities. Microsoft has perhaps done the most work here — adding ads to the Xbox dashboard and seeking out commercial partnerships,” PwC said. “This is despite earlier unsuccessful attempts to build a critical mass around in-game advertising after the acquisition of Massive. The introduction of commercial messages has caused a reaction from a vocal minority of players used to an ad-free experience. While their perspective is unlikely to change, most gamers will accept good advertising as part of their gaming experience and most mainstream audiences now accept advertising as a fair value exchange in free-to-play experiences.” 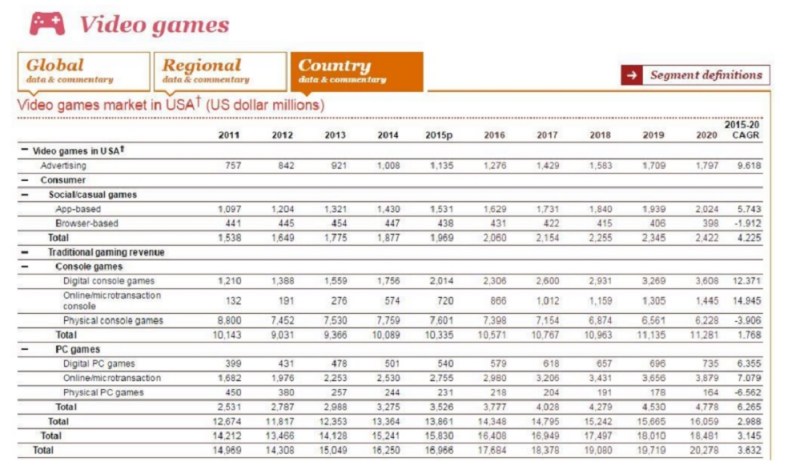