I know, I know — you’ve got games like Super Mario Odyssey, Assassin’s Creed: Origins, and Call of Duty: World War II on your to-play list. Or maybe you’re deep into Blizzard Entertainment’s team shooter Overwatch and you’re working on getting to platinum with the new healer Moira. But this year gave us a raft of outstanding indie games. Here are just a few that you should consider gifting a friend or giving a try yourself.

Night in the Woods (Infinite Fall) 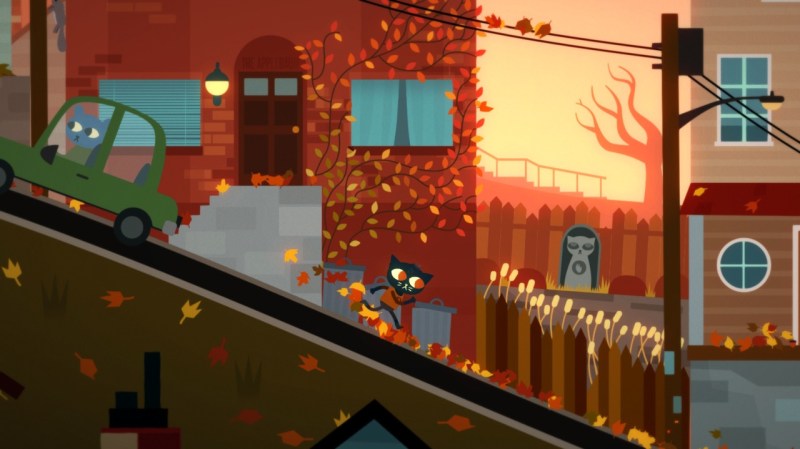 Infinite Fall’s Scott Benson describes Night in the Woods as “rust belt gothic.” That term encapsulates everything that makes this game a gem. It’s full of personality and heart. Its quirky characters are lovable but flawed and can’t seem to escape their dark pasts. They live in a small town that’s awash in radiant golden light, punctuated with bright colors, and dying as jobs start disappearing.

After protagonist Mae returns home from dropping out of college, she finds herself alienated from old friends — and she also finds a dismembered arm outside of the local diner. Much of the game is heavily narrative-driven so there’s quite a bit of text. But there are also rhythm games, like when Mae goes to band practice. You can play Demontower, a dungeon crawler on Mae’s computer, “do crimes” with her friend Gregg, or find constellations in the sky.

I first played the game in January, and the soundtrack still haunts me — its plucky upbeat tracks and the echoey songs from Mae’s nightmares, which sometimes sound like carnival music filled with foreboding. A new director’s cut edition will debut on December 13, but Night in the Woods is the kind of game you can play more than once to discover all the secrets and stories hidden within. 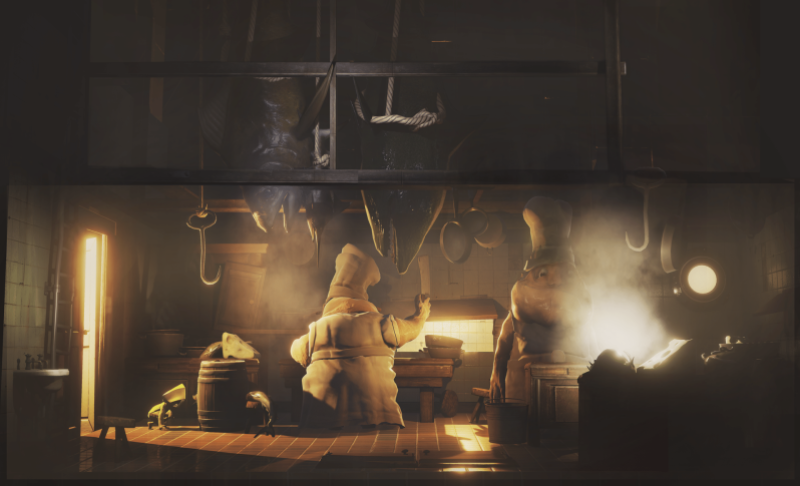 Above: It wouldn’t be wrong to describe Six as “bite-sized.”

Little Nightmares is an atmospheric puzzle-platformer that reminds me of a twisted version of Studio Ghibli’s Spirited Away … or an even more twisted version of Jean-Pierre Jeunet’s Delicatessen. It’s stylishly creepy, awash in a muted color palette as you hide from silent, sinister ghouls with long grasping arms or wearing masks made of skin.

You play as Six, a small girl seeking to escape her underwater prison. Tarsier has also released two of three DLC packs that enable you to explore the world from another character’s perspective. 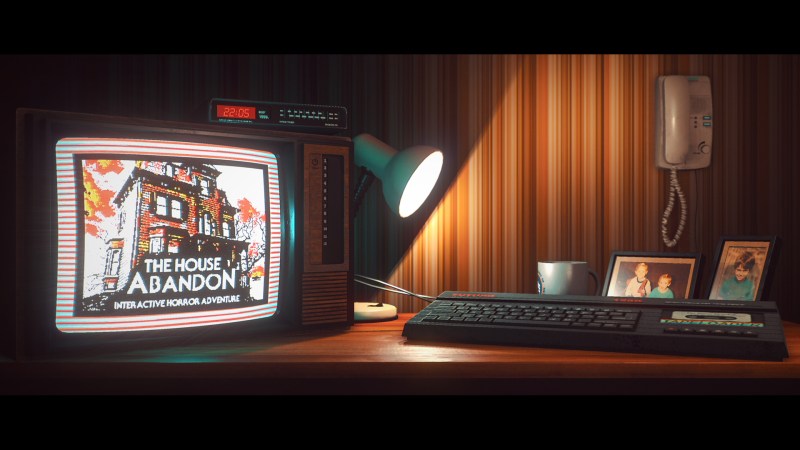 Above: A throwback that could become a classic.

Members of the No Code team have worked on acclaimed games such as Creative Assembly’s science-fiction horror title Alien: Isolation, and it shows. Stories Untold is four vignettes, all of which somehow incorporate the interface from old text adventures like Infocom’s Zork. It’s rich with atmosphere and intrigue, folding in a sense of nostalgia and retro aesthetic that will appeal to fans of Netflix’s Stranger Things. Though it’s not straight-up horror, it does have some creepy elements that will prickle and prod you with uneasiness.

The first episode, The House Abandon, is a remastered version of a project that emerged from a game jam. It sets the tone well, flipping your expectations that this will be like any other text adventure you’ve played. 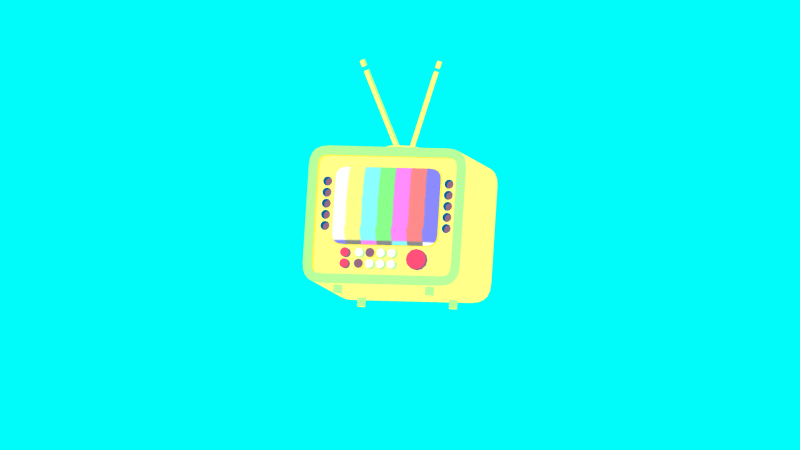 Above: A cheerful toy for your mobile phone.

Vignettes is a virtual toy that plays with perspective. Its bright sherbet colors are soothing, and it’s terrific fun spinning and manipulating objects in midair. The basic premise is that each object, when viewed from a different point of view, can turn into another object. One side of a TV, for instance, could become the flat bottom of a telephone.

It’s pleasingly tactile, and solving the perspective puzzles and discovering new objects is delightful. If you interact with the objects, you’re also sometimes rewarded with quirky animations and charming sound effects. 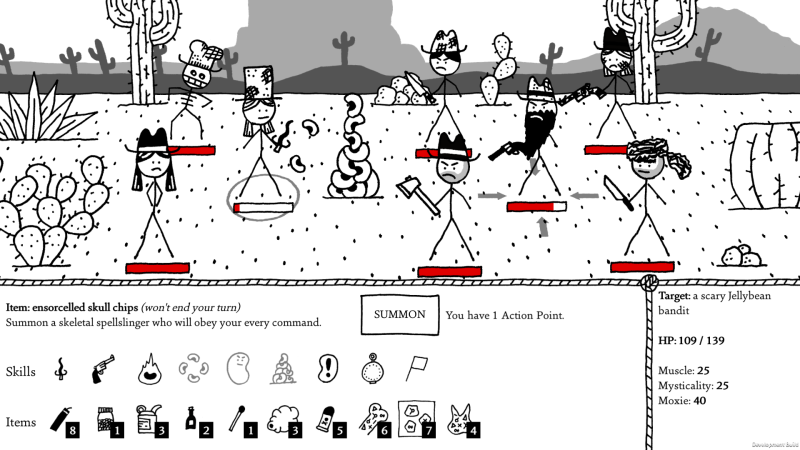 Above: A wild interpretation of the Old West.

West of Loathing gives a whole different meaning to “spaghetti Western.” It’s a puntastic RPG from Asymmetric Publications, a studio best known for the long-running web RPG Kingdom of Loathing. To give you a sense of its humor, your character can choose from the following classes: Beanslinger, Snake Oiler, and Cowpuncher. You can sink points into stats like Moxie and Gumption. Every time you stumble upon a spittoon, you can choose to rummage around in it — all while the game chastises you for your poor sense of personal hygiene.

Though the game opts for Kingdom of Loathing’s trademark stick figure aesthetic, its characters and environments are evocative and simply fun to look at. It has tons of secrets to explore and every other item or character you find has a clever thing to say.

Everything Is Going to Be OK (Nathalie Lawhead) 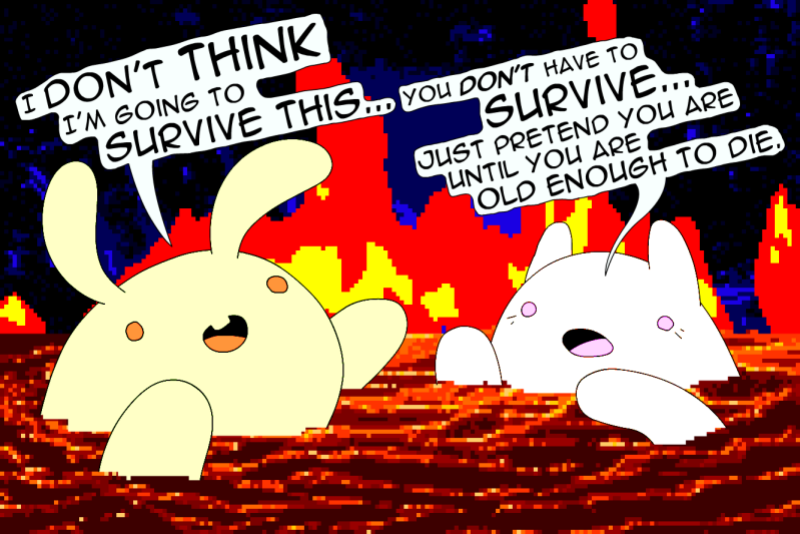 Above: Everything Is Going to Be OK is scattered with cheerful dark humor and relatable moments.

Platforms: PC, Mac
Price: Name your own price
Where to buy: Itch.io

Everything Is Going to Be OK isn’t a traditional game. Developer Nathalie Lawhead refers to it more as an “interactive zine.” When she talks about expanding on it, she refers to it as adding the “missing pages.” It’s the kind of game that wants to have a dialogue with you and is more of an experience rather than a collection of mechanics.

It’s also an intensely personal game. Lawhead created it to share and talk about some of her own struggles, and it addresses topics like social rejection and low self-esteem. But it’s also funny and poignant, and its bizarre little creatures are endearing to behold. At its core, it’s an optimistic game that’s an unflinching exploration of uncomfortable topics with bold humor. 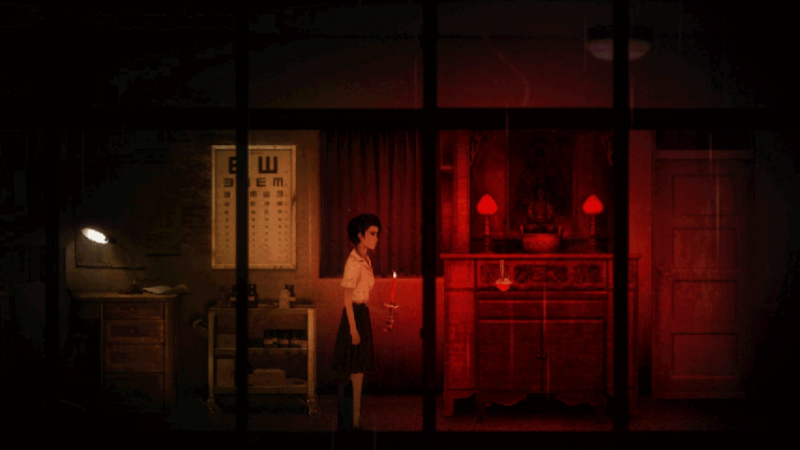 Above: Detention’s unique aesthetic comes from old photographs and newspapers.

Detention features ghosts and monsters from Taiwanese folklore. But the real horror is that it’s based on a real time period of oppression in the 1960s where the government brutally suppressed people simply for disagreeing with it.

You alternate between playing as two students, Wei and Ray. You spend most of your time in what appears to be a haunted school, solving puzzles and attempting to unravel the grisly truth behind what really happened there. It’s a tense, atmospheric experience that’s deeply unsettling because you know that parts of it are true.

What Remains of Edith Finch is a slow-burning cinematic experience about a cursed family and its many tragedies. As you explore the Finch home, a house that looms over you and appears larger than life, you play as each of the family members right before they meet their unfortunate ends. Each story is vastly different — in one, you morph into a variety of animals; in another, you simultaneously control two characters, one in a daydream and another in real life — and it’s a pleasant surprise to discover what each experience has in store. 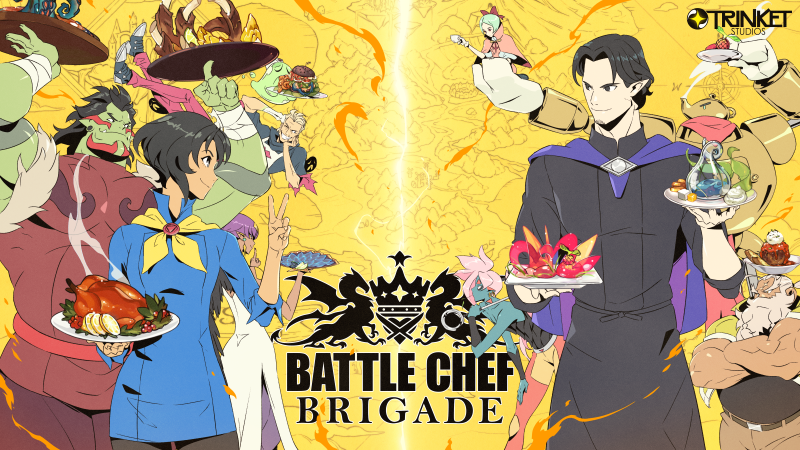 Above: This is what it’d look like if Studio Ghibli decided to make a movie about the competitive cooking show Iron Chef.

Battle Chef Brigade has a one-of-a-kind flavor, mixing combat with match-3 puzzles. You play as Mina, a bright-eyed young woman who aspires to join a battalion of battle-ready chefs. To qualify, she must compete in a tournament. Each round is timed, and she has to dash out and slay monsters, collect their parts, and complete match-3 puzzles to cook them into winning dishes.

Not only is the gameplay innovative and addictive, but the visuals are gorgeous. They’re hand drawn, inspired by Japanese anime, and do a lot to make the fantasy world of Victusia feel cozy and real. 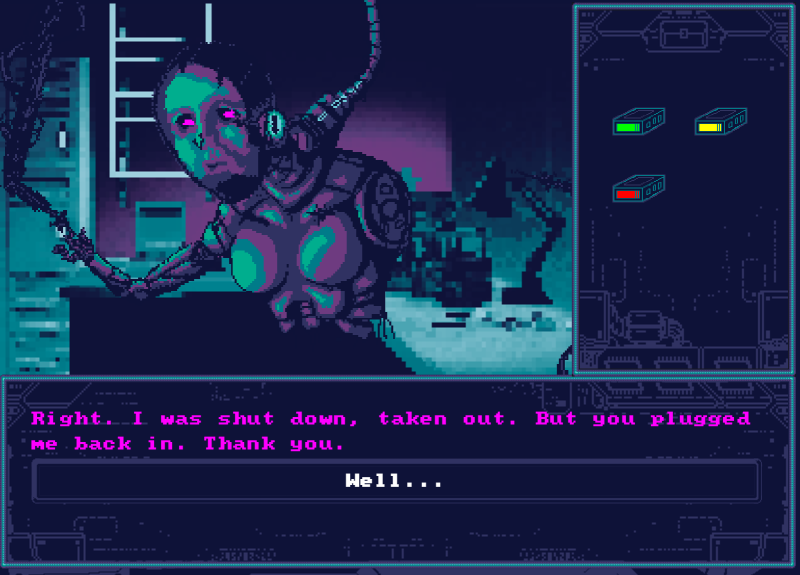 Above: A conversation with artificial intelligence.

Aether’s Localhost takes place entirely inside unnerving conversations with various artificial personalities. Your job is to wipe each hard drive so that customers can buy them. To do so, you have to convince the personalities inside the drives to let you unlock their hardware. The morality of this is gray, especially when they attempt to appeal to your conscience.

One of them claims to be human and says that there’s been a mistake, that they’re waiting to be transferred to their new body. Your boss texts you and tells you that this is just a defense mechanism — and maybe it is. It’s hard to decide who to trust and what’s the right thing to do.

Bury Me, My Love (The Pixel Hunt/Figs) 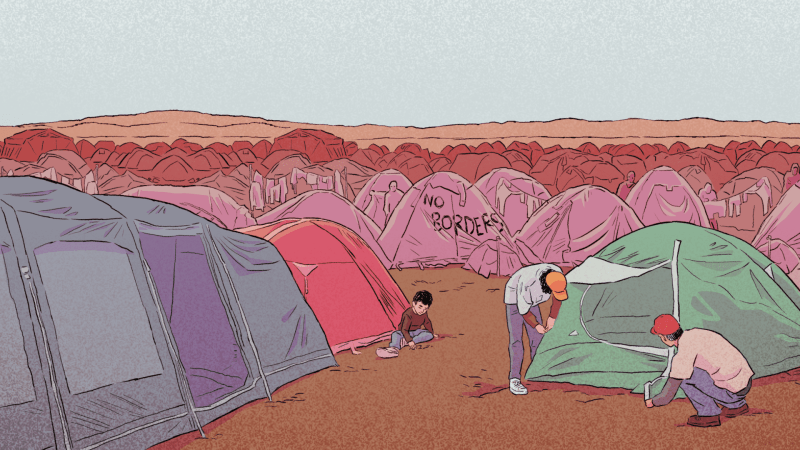 Above: The view from a refugee camp.

Bury Me, My Love is an emotional roller coaster. It’s a mobile game that uses the interface of a messaging app to simulate conversations between Nour and Majd, a Syrian couple who’s been separated because of the Syrian civil war. You play as Majd, who has to stay behind in their hometown Homs while Nour makes the dangerous trek to Europe. From afar, you try to help her make incredibly difficult choices. Developer The Pixel Hunt based the game on the experiences of Syrian refugees to depict the ever-present danger and real-life threats on their journeys to safety.

Nour and Majd’s conversations are sometimes funny and uplifting as they joke around and try to bolster each other’s spirits. Other times, it’s quite nerve-wracking. The game runs on an internal clock, so sometimes Nour will have to end the conversation and all you can do is wait for her to text you again to find out how she’s doing. It’s a heartbreaking game that’s filled with loving tender moments, and it’s the perfect reminder during the holidays to be thankful for what we have.