As CEO of The Void, Cliff Plumer has to think big. Virtual reality fans are dishing out money for PC-based and mobile-based VR systems. But The Void is making location-based VR experiences must create a much bigger impression, since consumers will be paying for that experience in places such as theme parks.

The Void created the Ghostbusters: Dimension VR experience at the Madame Tussaud’s wax museum in New York. Tickets cost $53, and for that price, consumers get tetherless VR, 3D audio, motion sensors, and other kinds of feedback that attempt to immerse you in the world of Ghostbusters. The fans put on VR headsets attached to backpacks and then hunt ghosts with a proton gun in their hands. Plumer believes these extras will help make it more realistic and will help distinguish The Void’s products from low-end VR.

And Disney announced that The Void will create a new VR experience at Disney’s theme parks: Star Wars: Secrets of the Empire. I interviewed Plumer, who has 30 years of experience in the entertainment technology industry, as he was finishing up a visit to Israel for the Beyond Reality event, which took VR leaders on a tour of Israel’s VR and augmented reality research centers. We talked about making VR more accessible and affordable, and how companies can survive the current slowdown in VR sales.

GamesBeat: What drew you Beyond Reality? What do you hope to get out of this event?

Cliff Plumer: One, I’ve always been interested in visiting Israel. I’ve seen a lot of amazing technology come out of this country. It was an opportunity to come over here and meet some people, meet some companies, and just see the country and the culture. It was hard to pass up. It worked out well. I haven’t been disappointed.

GamesBeat: There’s a lot of AR and VR technology in development in Israel.

Plumer: It’s impressive. I hadn’t known the depth of the support that the tech community gets here, both privately and from the government. 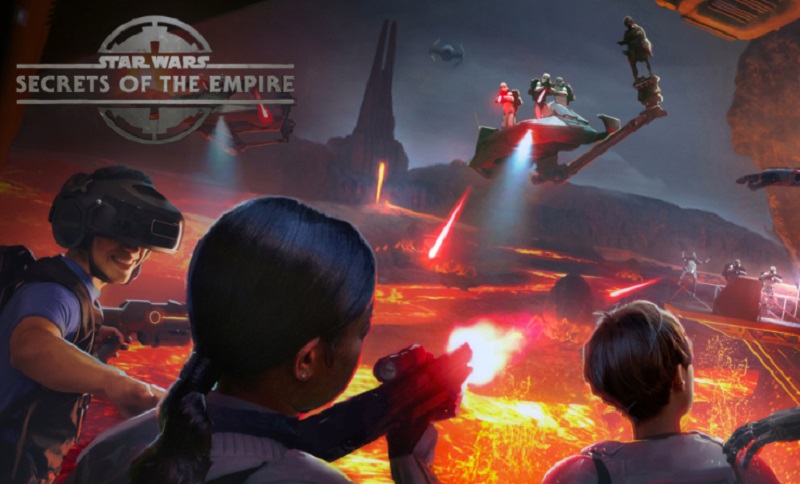 Above: The Void is making Star Wars: Secrets of the Empire as a VR experience in Disney theme parks.

GamesBeat: What’s a good way to introduce readers to The Void and the kind of work that it does, especially those who haven’t been able to make it to New York for your Ghostbusters production?

Plumer: One thing we try to emphasize is we don’t look at ourselves as just a VR company. All of our experiences are designed to be multisensory. Depending on the experience we’re creating, it’s not just something you see and hear. Being able to touch things and smell things — between the haptics and the other 4D effects we add to our experiences, that’s what creates that true immersion, as well as the social aspect. You’re not just interacting in the world we create, but you’re collaborating with the people you play with. It’s very much a social experience as well.

We find, with our guests that go through, that they forget about the technology. They just buy into it. They’re in the moment of that world that they’re exploring, just having fun. Too much of the conversation in the last couple of years has been about the tech, I think. We just need more great experiences that consumers can get excited about and want more of.

GamesBeat: You seem to have voted with the choices you made here, that you don’t want to leave anything out of the experience. You want to load in anything that makes it more immersive, even if it’s not part of a basic platform for VR.

Plumer: Right. We definitely want to gray the border between reality and the virtual world. There are things we’re working on that really play with your brain. Not only do you have to calibrate going into the experience, but you have to calibrate coming out of it. The more we gray that line, the more immersive and unique the experience becomes. We’re doing a lot to prepare our guests to go into the virtual world and come out of it that adds to the overall experience.

GamesBeat: Do you feel that the Ghostbusters experience is a good way to get a lot of people to try it out and pay for it and fund the technology?

GamesBeat: And now you’re working with Disney on a Star Wars experience?

Above: Inside The Void’s Ghostbusters Dimension experience.

Plumer: We’re shooting high. [laughs] It’s been great working with the Walt Disney Company and my friends at Lucasfilm again. We’re obviously excited about that. It’s going to be amazing. In comparison to what we did a year ago, this is the next level.

GamesBeat: Do you think of this as something more like a ride? Obviously, you’re not just treating it like logging into a PC, which is the way a lot of VR experiences have felt.

Plumer: We think of them as experiences. We obviously pay attention to other entertainment experiences out there, and not just in VR. We look at things like escape rooms, or Sleep No More in New York, all those sorts of immersive experience that are new. We try to learn from them and see what parts of those things can be integrated into what we do. With the Star Wars experience, it’s a huge difference from what we’ve done before. I’m sure fans will love it.

Plumer: All those sorts of things, whether it’s to create a sense of motion, hitting all the different senses — there’s a lot we’re doing to enhance the avatars. We’re working on getting those to the point of photorealism, with more fluid motion and things like that. We’re adding more to the avatars you engage with in the experience as well. It’s not just about the world you’re in, but populating those worlds with interesting and engaging characters as well.

GamesBeat: What kind of challenge do you face in satisfying consumers now? You have to up the experience to a point where it’s not something they can do at home.

Plumer: Absolutely. That’s what always motivated me in my film career, always raising the bar. How do you show an audience something they haven’t seen before? It’s no different with what we’re doing at The Void. We always have to get consumers coming back to see something they haven’t seen before. If we achieve that we’ll be successful and keep entertaining customers for a long time.

Above: Ghostbusters Dimension experience in VR.

GamesBeat: Do you see technology having a path into homes? Do you ever seen your company making experiences for a mass consumer market?

Plumer: It’d be a completely different experience. Most consumers don’t have a lot of space in their homes or apartments. It just can’t compare to what we do in a Void center. People still go to amusement parks because you can’t replicate any of that at home. Some of the things that we’re doing, even though we don’t have a very big footprint, are still more than you can do at home, especially that social experience that we try to create.

But there are things we’re doing to create an in-home experience that may prepare you for going to a Void center, or allow you to network in. We’re working on technology where we can have people in different physical locations still share the same virtual worlds. That will give us some flexibility, not just at our Void centers, but for people who can engage from home.