Exploding Kittens made a huge mark as a quirky tabletop card game last year. And now it’s been adapted for an iOS game that debuted today in Apple’s App Store.

The creators at Substantial hope to carry the explosive demand for the table card version of the game — driven by the game’s funny art style and funny gameplay — that debuted last year and parlay it into a much larger audience in the $30 billion mobile game industry. The title has already zoomed to No. 14 on the app store in top paid downloads. It is No. 5 in paid games.

The table card game was the most funded game in Kickstarter history, raising more than $8 million from 219,382 contributors. Its creators are Elan Lee, the creator of eDoc Laundry; Matt Inman, the creator of The Oatmeal online comic; and Shane Small, the former principal art director at Xbox Entertainment Studios.

The earlier Exploding Kittens was a paper-based card game (we had fun playing it in our hands-on demo) that will be like playing Russian Roulette, where the loser is the person who draws the Exploding Kittens card. The game’s zaniness, the Oatmeal’s involvement, and its viral status on social media helped propel it. It says something when an idea is so creative that everybody wants to throw money at it.

For the 1.99 digital game, the founders teamed up with Seattle-based digital product studio Substantial to create an iOS app that would not just replicate the original game but evolve and improve it for old and new fans alike. Two to five players can play it as a multiplayer title, but they have to be in the same room. The digital game has new cards that the paper one doesn’t, and it has sound effects. The game is built in Unity, and it uses art from The Oatmeal.

Paul Rush, CEO of Substantial, said in an interview with GamesBeat that a four-person team started working on the digital game last May.

“The biggest task was figuring out how to do an adaptation of a card game to mobile, as there are some things that don’t map well,” Rush said.

The team had to understand what made the card game so fun and try to capture the idea of screwing over other people in the game.

In the table game, you put the deck of cards face down. You take turns drawing cards, and if you draw the Exploding Kitten card, you are out — unless that player has a “defuse” card that can neutralize the kittens with laser pointers, kitten therapy, and catnip sandwiches. You can also deploy a Tacocat, Abracrab Lincoln, Magical Meat Bikini, and a Catterwocky. Action cards do things like remove or mitigate the kittens. You can deploy the thousand-year back hair, peek at cards by rubbing the belly of a pig-a-corn, skip a turn by wearing a portable cheetah butt, or seek out the wisdom of a goat wizard. You have to decide which cards to play, when to play them, and which of your opponents to target. Every card you draw increases your odds of drawing the Exploding Kitten, making things tenser as the game progresses.

In the digital game, the gameplay lasts for maybe five minutes, but the goal is to get people to play it over and over again, said Josh Buchacher, software developer at Substantial, in an interview. You can screw over other players quite easily in the game, but you should hold off on that if you want the players to play with you again, he said.

“You have to be nice to people so they will play with you again, but there is a very appropriate time to slaughter your friends and family members,” Buchacher said.

Buchacher said the team is mulling over whether to add features such as Internet play where players don’t have to be in the same room. 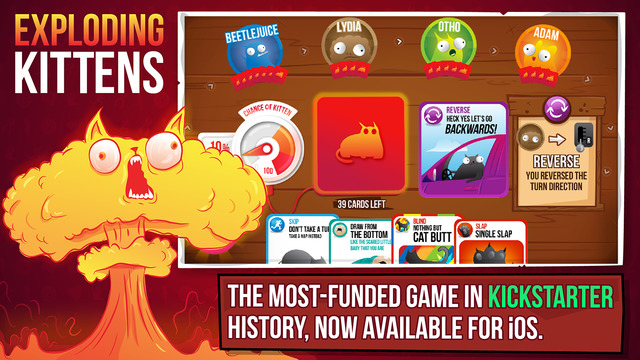 Above: Exploding Kittens on mobile