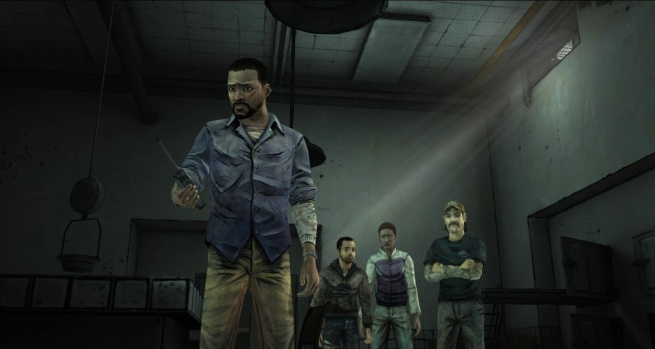 Warning: This review may contain spoilers for The Walking Dead video-game series.

After the heartbreak that was The Walking Dead Episode 3: Long Road Ahead, I dared to think Telltale Games would let up in its quest to make point-and-click adventure game fans complain about having something in their eye. I was wrong. If anything, Episode 4: Around Every Corner is the most melancholy installment in the series yet. It trades in many of the agonizing moral decisions and shocking moments of earlier episodes for a pervasive sense of sadness and horror that will linger even after the credits roll. And as the penultimate episode, it does what every good second-to-last episode should do: It raises the stakes, setting up a climatic ending scene that will have players wishing they could get their hands on the final episode now.

The story is still very good

Written by author and screenwriter Gary Whitta, Around Every Corner begins with protagonist Lee Everett and his fellow survivors finally arriving in Savannah, Ga. They’re searching for a boat to take them away from the zombie-infested mainland, but naturally, things don’t go exactly as planned.

First, they have the mystery man on the walkie-talkie to deal with. The end of Long Road Ahead reveals that he’s been talking to 8-year-old Clementine in secret. But why? The episode does a good job in the beginning of building tension around this particular plot point. You feel stalked, like eyes are truly “Around Every Corner.” But sadly, Telltale abandons this plot thread almost immediately for a more pressing problem — the survivors need supplies (again).

The nearby neighborhood of Crawford has the items they need, but it turns out to be even more unsavory than the St. John dairy farm in Episode 2: Starved for Help. “Survival of the fittest” is Crawford’s motto, and the lengths it goes to live up to it are more horrifying than the zombies they’re surviving against. The Walking Dead franchise, whether it’s the comic, the TV show, or the game, likes to make the point that your fellow humans are in many ways more dangerous than the undead. Around Every Corner is no exception. Crawford’s backstory, revealed through videotapes, dialogue, and scenery, is a mini-morality tale with a darkly poetic ending, and it’s a shame that Telltale doesn’t have enough time in the series to explore it further. 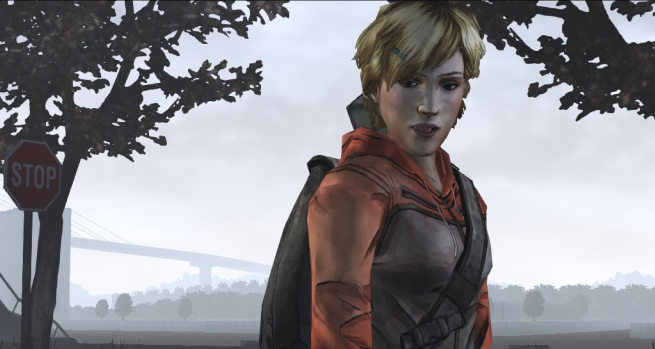 The story’s not perfect

Episode 4 is at its best when it’s quietly ripping your heart out. Some of the more effective moments don’t involve a ton of action and dialogue. But other things seem to happen simply because they’re convenient, including a major story-changing moment at the end of the episode that I won’t detail here. Some moments feel a bit contrived, like when an old TV just happens to fall on the head of a zombie, or when you need to open a safe and a camera just happens to be pointed at it and the keypad.

Another problem is the new characters. Introducing new ones so late in the story means you have less time to get to know and care about them. While I thought newcomer Molly was interesting (but slightly unbelievable), I found myself not really caring about Episode 3 additions Christa and Omid. Another new character was so disposable she might as well have worn a red shirt, while a character I did care about died offscreen with little fanfare or mention. Hopefully, Telltale will stick with the roster of characters it has for Episode 5 and make us care about them more … probably before killing them horribly. Damn you, Telltale.

The puzzles are still too easy

Way back in my review for Episode 1: A New Day, I complained about the puzzles being too simple. That hasn’t changed. Not once while playing Around Every Corner did I have to pause and think about what I was doing or turn to the Internet for help. All of the episode’s puzzles are easy to figure out with a little common sense. The most challenging moments of the game for me were those where I actually had to shoot zombies, where failure means death and restart.

While I don’t necessarily miss the old-school adventure game days of tedious backtracking, pixel hunting, and esoteric puzzle solving, I would enjoy more of a challenge. Half the fun of a point-and-click adventure game is in the puzzles. Spending an hour scratching your head, jotting down notes, experimenting with different items, then feeling that rush of accomplishment when you finally figure it out … that experience doesn’t exist in The Walking Dead. The series’ strength is all in its story. Luckily, it’s a good one. 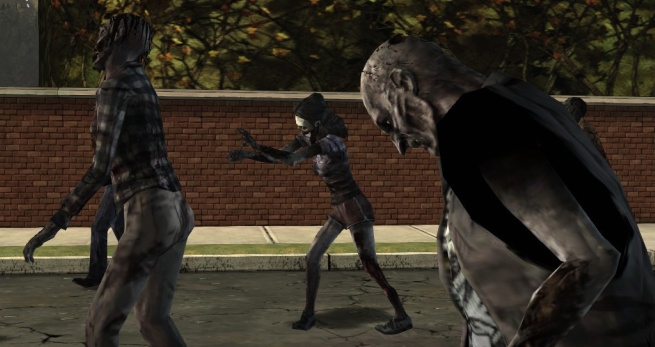 If you’ve been playing The Walking Dead since the beginning, you’ll likely enjoy Around Every Corner. Penultimate television episodes are usually accused of being “filler,” but not once did I get that impression while playing Episode 4. It hooked me until the end with its emotional storytelling and plot twists, even if reaching that end was a bit of a breeze. And if you haven’t played this series yet, now’s a good time to catch up. It has only one more episode to go!

Score: 87/100
The Walking Dead Episode 4: Around Every Corner released on Oct. 9 for the PlayStation 3 and on Oct. 10 for the Xbox 360 and PC. The publisher provided GamesBeat with a PC download code for the purpose of this review.