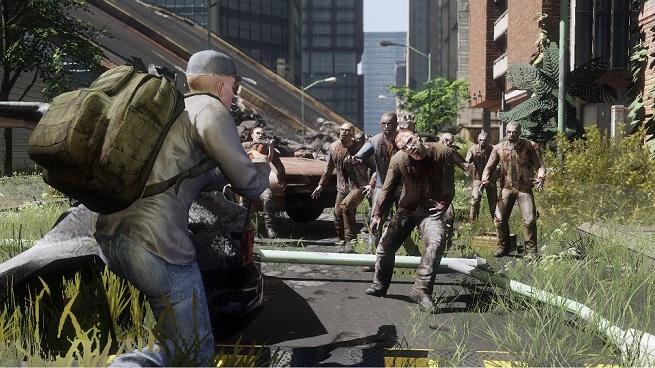 Not even the massively multiplayer online (MMO) space is safe from the shambling corpses of the undead: The War Z is an upcoming “survival horror” MMO developed by Hammerpoint Interactive, an independent Los Angeles-based studio formed just last year. Arktos Entertainment Group, a privately held investment firm, clearly believes in the developer’s vision as it has previously invested $4 million into the studio.

Set to release this fall on Windows PCs, The War Z tasks you with the immense challenge of fighting against both zombies and other survivors in huge, open-world maps (ranging between 200 to 400 square kilometers), including large, infested cities. The developers stress the inclusion of “strong role-playing-game elements” with an experience-point system that can be used to purchase new skills for your character.

Safe settlements are scattered across the post-apocalyptic world, and they provide opportunities for you to purchase supplies or sell your own. The developers also tout “unique social elements” in the game, like placing bounties on and sending help requests to other players, who of course may or may not help you, depending on their own agendas.

“The whole team is obsessed with zombie culture as well as with post-apocalyptic games like Fallout,” said Eric Nordin, the senior game designer for The War Z, in the press release. “At the end of the day, we want to ship a game that we want to play ourselves, and we’re hoping that other gamers will recognize our passion and be excited about playing as well.”

It sounds a lot like the popular zombie survival mod, DayZ, for Bohemia Interactive’s ARMA II, right down to The War Z’s Hardcore mode where death is permanent (in DayZ, this is the only option). DayZ, however, is just a side project still in alpha being managed by a one-man team, with constant updates being made almost every week. The War Z, also currently in alpha, has a full-fledged development studio behind it.

Hammerpoint bucks the usual trend of the MMO-subscription model for The War Z by only requiring a single purchase, and it promises free content updates upon release, as well as dedicated public and private servers. For those looking to get in on the action early, a closed beta is in the works.