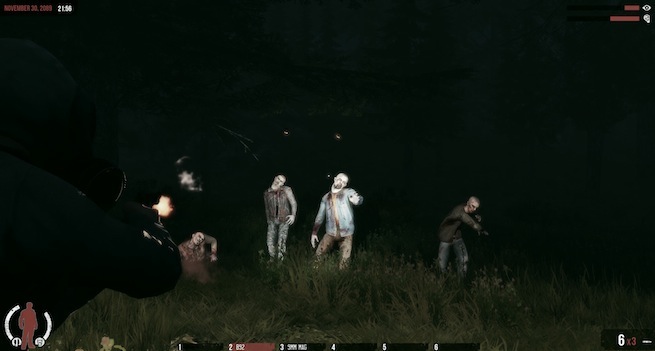 I hope you’re not tired of killing zombies just yet. With Resident Evil 6, Zombies mode in Call of Duty: Black Ops II, and Telltale Games’ The Walking Dead, fans of the flesh-eating corpses have plenty of games to play this year. But developer Hammerpoint Interactive is hoping you still have room for one more with The War Z. It’s not just another zombie game: It’s an entire toolset for players to play the game the way they want to play.

“From our perspective, it’s not just a game — it’s more like [a set of tools] for players to help create their own emergent gameplay,” said Sergey Titov, the executive producer of The War Z, in an interview with GamesBeat. “For example, just two hours before our meeting, we went all guns blazing into the city … it was more like a Left 4 Dead experience than anything else. In other plays, we’ve actually taken a really cautious exploration route, [and] it was a completely different gameplay style. We think not in terms of what gameplay will look like, but more like what stages of gameplay will be [right] for you.”

Set for release this fall sometime after the beta launches in October, The War Z is a massively multiplayer online game (without a subscription fee) in which you fight against both zombies and other survivors in huge, open-world maps. It’s already a proven formula thanks to the success of DayZ, the zombie-survival mod for military simulator ArmA II that took the PC world by storm earlier this year.

However, the name and premise for both games might be too similar. Since The War Z announcement in July, some people accused Hammerpoint of simply riding on DayZ’s success, no matter what the developer said otherwise. It’s hard not to see why: With its challenging gameplay and thrilling accounts of personal experiences, over 1 million  players lived and died on the zombie-infested nation of Chernarus. DayZ creator Dean “Rocket” Hall recently revealed that a stand-alone version of the mod will be out in a few months’ time

Here’s a look at 14 of the most dramatic departures from DayZ:

You can re-create Farmville

It sounds absurd, but it’s true: Since private servers (available for a small monthly fee) enable you to tweak a large number of options in the game, one creative tester decided to use a small map of a farm to plant hundreds of vegetables. He looked for water, planted the crops, harvested them, and tried to barter and sell them for equipment.

The reason he did this? He wanted his wife, a big Farmville player, to play with him. “He was like, ‘I basically built this farm in War Z for her to play. So she switched,’” said Titov. “We hope that, from our standpoint, it will be cool if players … work on rebuilding society in this zombie apocalypse. So whatever happens there, and [how] crazy this society becomes, we’ll see.” 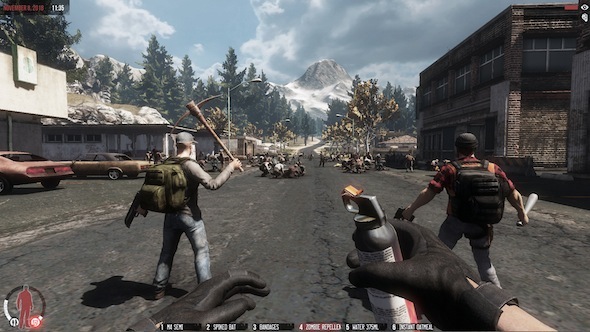 DayZ multiplayer servers adjusts its day and night cycles in real time, so depending on its time zone, you might end up playing in the dark if you load up the mod at 7 p.m. in California; the other option is to look for international servers to see if it’s still daylight. For The War Z’s current testing period, from sunrise to sunset, the process takes four hours — for the final release, Hammerpoint wants to keep it between four to six hours.

With five character slots, The War Z encourages you to experiment with different playstyles, builds, and appearances (six to eight different character skins are available at launch). If you don’t like the way a particular character is progressing, you can delete them from that slot. The DayZ mod limits you to one character at a time.

As you kill zombies and look for loot while running across Colorado (the first map for The War Z), you earn experience points. You can spend these points to unlock additional character skins or increase various attributes in your individual skill trees. In DayZ, characters do not level up; the only way to get “stronger” is to find better weapons and supplies.

“It’s not like superpowers with plus-10 damage, plus-100 health or something,” said Titov. “It’s more like physical training, so you can run for longer periods of time … [other skills] make you reload faster [or] carry more weight.”

Part of the appeal of DayZ is when you die, you permanently lose all the equipment you found; if you want to play again, you’ll have to start over with almost nothing in your backpack. In The War Z, the stakes are higher in what Hammerpoint is calling Hardcore mode: Not only do you lose your items when you die, but anything you learned from your skill tree, any experience points collected, and your position on the leaderboard (separate for each mode) disappear. But if you do choose to play this way, you’ll have access to Hardcore-only servers, where you’re more likely to find rare items than when playing on the regular servers.

Normal mode is for players not willing to risk everything they’ve earned each time they play. Instead of erasing your progress when you die, it locks your character from the game for a set amount of time, ranging somewhere between 24 hours to 48 hours. So you can either wait until that time is up, or just use one of your other characters.

Some, such as flashlights and silencers, come pre-equipped with guns in the DayZ mod, but it’s not possible to remove and add them as you see fit. This is doable in The War Z, where a number of attachments can be found in the world; but Titov warned that, next to guns and ammo, these parts are “super rare.”

You can construct buildings and barricades

Titov told another quirky story to come out of The War Z’s testers: One guy built a gladiatorial arena on a private server, forcing players to fight to the death. Though you won’t be able to build such large structures on public servers, you can still fortify existing buildings with over a dozen different objects, such as a wooden barricade.

You can find these as is, so you don’t need to look for supplies or tools to make them. You can also dismantle them if you have to.