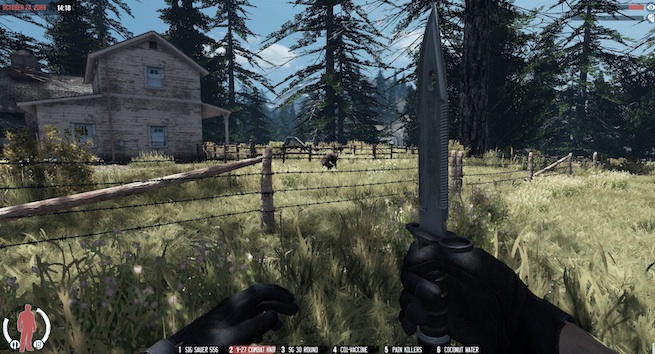 Although not shown during the demo, Titov likened these special creatures (who only lurk at night) to those in the 2008 film I Am Legend; they’re faster and more aggressive than the shambling George Romero-type zombies you’ll usually face. Hunting them down nets you a valuable prize: stem cells. You can sell these stem cells at safe settlements for Gold Coins — a premium currency you can also buy with real-world cash. Or you can use it to construct a vaccine.

This vaccine is useful in the small chance that a zombie bite takes a turn for the worse. If you become infected, your blood toxicity level will rise, and once that reaches 100 percent, your life will start to rapidly decrease. If you don’t have a vaccine in your pack, you can keep yourself alive on a steady stream of antibiotics and painkillers until you find one. If you succumb to the infection, you’ll just die rather than turn into a zombie.

Like DayZ, The War Z’s open-world gameplay enables players to do whatever they want, even if it means they just want to hunt down other survivors. But killing players can come with a cost: If you kill anyone who is “good” or “neutral,” according to a sliding scale in The War Z’s reputation system, your own reputation will significantly decrease.

And if you end up on the lowest rung of the morality ladder, your character will automatically join other delightfully twisted players in the game’s Most Wanted list, which places a bounty of Gold Coins on your head for anyone to claim.

Create your own missions

Player-created missions are part of what Titov calls the “social collaboration” tools in The War Z, and you can design tasks (either from a predefined list or something you made up on your own) for others to take on. So if you don’t want to risk losing your life going after the mutated zombies, you can try to contract those kills to someone else … but of course, it’s not a 100 percent guarantee that they’ll actually come back and give you those stem cells.

“It can be freeform, like say, bring me 10 pumpkins, or be my shrink for 30 minutes, and I’ll give you a reward,” said Titov. “It’s up to you to decide if you want to actually give a reward to the player who completed the mission or not. You can lie.”

It all comes down to trusting one another, something that is perhaps even more rare than Gold Coins in the zombie apocalypse.

Scattered throughout the map are places known as safe settlements, which as the name implies, is safe from zombies. Here you’ll find a bar that acts as sort of a social hub for The War Z, and it’s where you can post, or accept, custom missions; you can also check out the latest update to the Most Wanted list.

Another important function for these areas is gaining access to your global inventory. You can use this from the main menu as well if, when logged out, your character is near a safe settlement. You’ll also find a general store to buy more supplies from.

The only thing these settlements are not safe from is players. However, nonplayable sentry guards will shoot anyone foolish enough to take it over, and in most cases, kill them immediately; these players will suffer a huge hit to their reputation in the process. Titov hinted that larger groups of players, such as a clan, may stand a fighting chance if they raid it together. 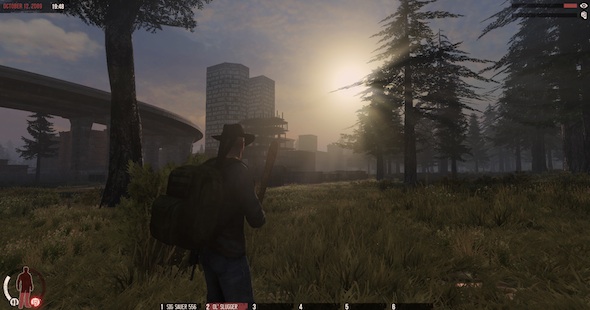 It’s easy to meet with friends in The War Z, which has a Community tab in the main menu to manage your friends list and clans. In the DayZ mod, it requires a lot of virtual footwork and communication to pinpoint where your friend spawned on its massive map, and trying to find them can feel like a chore.

Before you load up your character, you may purchase in-game goods from the marketplace. These include common items, like flares and chemical lights, to slightly different looking weapons — with comparable stats to its original form found in the game — such as a metal baseball bat in the store versus a wooden bat found in the game. You can only buy some things, like vaccines, with Gold Coins.

“It doesn’t give you an advantage in the game, but it’s cool,” said Titov. “[And with the common items], it’s just a quicker way to get them. You can find them in the game, or you can just buy them right away.”

Since society collapsed, inflation is sky high in The War Z, and the U.S dollar isn’t quite as strong as it used to be. While collecting cash during your adventures will allow you to buy some items, you’ll probably want to focus on grabbing Gold Coins instead.

It’s not the only option, however. Remember the Farmville guy? He was using the vegetables he grew as a form of currency. So if you don’t want to use either dollars or Gold Coins, you’re free to explore other ways of bartering for goods and services.