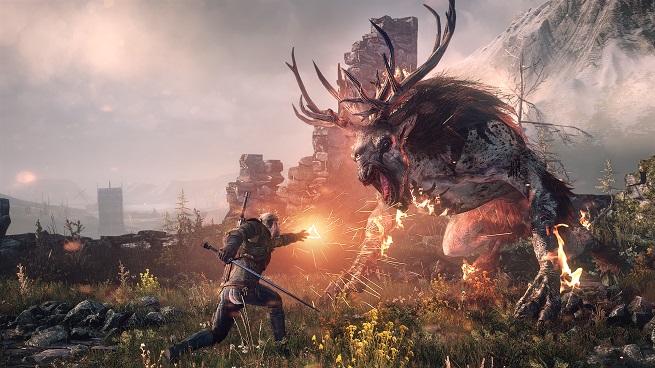 You know, when you think about it, The Witcher video game series shares some similarities with the hit HBO TV show Game of Thrones. Both are based on works by popular fantasy authors. Both tell tales of characters that are neither completely good nor completely evil. Both are set in harsh fictional medieval worlds populated with mythical creatures, scheming nobles, and the occasional brother-sister incest.

And they both look damn good.

Due for PC, PlayStation 4, and Xbox One sometime in 2014, The Witcher 3 is the final entry in CD Projekt RED’s critically acclaimed action-role-playing game franchise. It’s also the first title in the series to feature a truly open game world and free-roaming exploration, and it’s gorgeously detailed. CD Projekt claims it’s 35 times bigger than The Witcher 2: Assassins of Kings (a large game in itself) and takes 40 minutes to travel on horseback end to end.

“Basically, the new philosophy of exploring the world in The Witcher 3 is that you can get to every place you see on the screen,” the developer told the media during a live gameplay demo at this week’s Electronic Entertainment Expo in Los Angeles. “This is a massive improvement in comparison to Witcher 2, which had some artificial barriers.”

Of course, a world that big and beautiful is pointless unless it’s filled with interesting things to do. The Witcher 3’s standalone, nonlinear story once again focuses on mutant monster hunter Geralt of Rivia. CD Projekt promises a more personal story for Geralt this time around. Now freed from the political machinations of kings and elves, he’s able to search for his loved ones and pursue the Wild Hunt, a spectral force straight out of folklore that brings death and terror to all it passes. The beginning of the demo shows these skeletal riders attacking a village, and Geralt seeks the lone survivor of the massacre to get some answers.

The ability to track down and slay epic beasts is nothing new — Capcom built an entire franchise around it. But it’s an important part of The Witcher lore, and CD Projekt is putting greater emphasis on it this time around. “We decided we would no longer have this world of enemies who are very weak and who you’re just slashing them and killing them,” said The Witcher 3 game director Konrad Tomaszkiewicz. “We decided to create this Monster Hunting system and the Witcher Sense system and create monsters in a way that would be unique. They got their own special abilities, and the hunt for every one of these monsters will be different. You will feel that you’re a monster hunter actually in the game.” 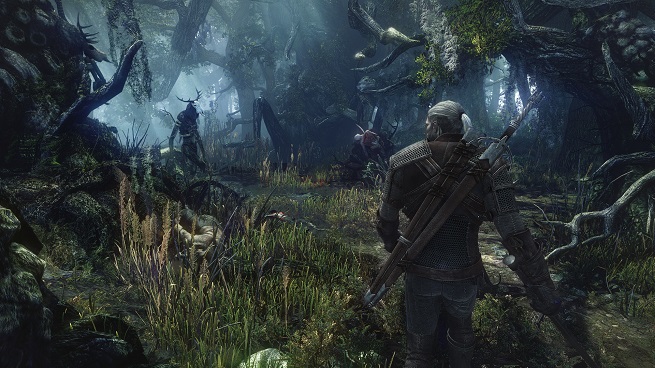 There’s about 80 different monsters in The Witcher 3, the developer says, and each has its own habitat, strengths, and weaknesses. During the demo, the developer showed a side quest involving a formerly peaceful woodland spirit that is now terrorizing the village that used to worship it. Geralt agrees to slay the beast (for a price), but first he has to find it. A simple press of a button activates Geralt’s new Witcher Sense (think Detective Vision in Batman: Arkham Asylum), and it’s not long before he spots the creature’s trail. He discovers that it’s a Leshen — a tall, antlered being that can control the forest and disappear in a cloud of ravens.

Geralt has deep knowledge of his world’s more deadlier creatures, and all of that information is in the game’s Monster Journal. This Wikipedia-like bestiary is incredibly detailed; by reading it, the player learns that the Leshen is very territorial and uses totems to steal power from the forest. It also likes to bind itself to a nearby human and use that person’s vital energy to resurrect itself if it’s slain. Once again, Geralt’s heightened senses allow him to find the marked person, an innocent woman named Hilde. Once she’s dealt with (presumably killed), Geralt is free to hunt down and destroy the totems and finally the spirit itself.

The battle with the Leshen is a spooky, tense affair. Wolves spring out of the shadows at Geralt, and massive tree roots rise up to strike and hinder him. The Leshen itself is a cagey opponent that randomly teleports about the forest, but eventually Geralt is successful and returns to the village to collect his reward.

There he learns that not all of the world’s monsters have antlers or walk on four legs. While he was off dealing with the Leshen, the man who hired him decided to stage a coup, slaying the village elders in cold blood. Geralt calls the man a murderer but ultimately collects his fee and moves on. What else can he do? The world of The Witcher is dark and morally ambiguous, and sometimes picking the lesser of two evils is the best choice available.