The Witcher 3: Wild Hunt is the apex of the dark fantasy role-playing game.

This, for reasons I will go into shortly, is both a good and ultimately frustrating thing. CD Projekt RED has once again outdone itself with Wild Hunt (out May 19 for PlayStation 4, Xbox One, and PC), expanding the already impressively vast scope of the Witcher 2 into a dense behemoth of monsters and politics. Even more stunning is the eye-gouging slabs of beautiful scenery plastered throughout at a new constant clip. But size and eye-candy can only hold for so long in a game boasting over 200 hours of available content. I journeyed along with a prerelease PS4 copy to track just how complex an adventure of this size could manage to be.

A dark fantasy that is actually dark 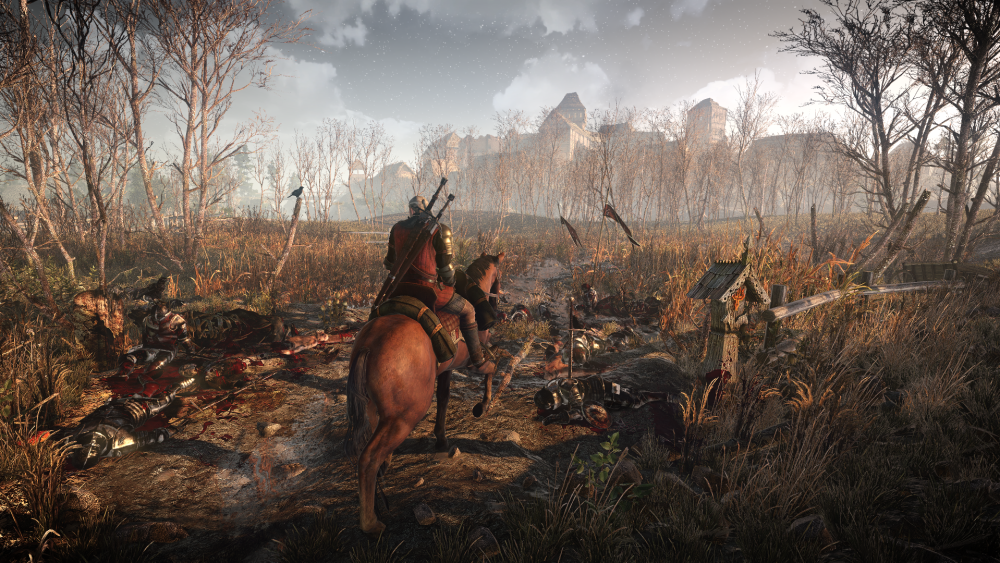 Above: Unlike most “dark” games, Wild Hunt earns its maturity through emotional complexity and fluid morality.

Grime and grit have become code for immaturity in these past few years, especially in video games. A first-person shooter or RPG will drop one of the “g” words to hype up their intensity, with the final release only hinting at adult topics for no other reason but the headlines and controversy. Not only is the Witcher 3 genuine in its broaching of dark subject matter, it’s largely unrivaled in its depth of approach to wavering morality and unforeseen consequence.

Witcher 3 hinges its tale on the search for the monster-slaying Geralt of Rivia’s adoptive daughter Ciri, a gifted young woman fighting off the pursuit of the ethereal — and titular – Wild Hunt. Geralt’s quest for Ciri (whom the player occasionally plays as for brief spurts) takes him across immense stretches of a continent in the war-ravaged Northern Kingdoms, diseased fiefdoms and lavish upper-class estates embroiled alike in a seismic political shift. It heaps reams of lore on the player at every major turn, which leaves newcomers to the franchise likely to drown in exposition until they dive into the in-game codex or play through the previous games. But while aggressively dense in its worst moments, the emotional and moral complexity that has come to define the Witcher series is at its most gleaming, polished best in The Wild Hunt.

Don’t expect Witcher 3 speed-runs. The story of the Wild Hunt works best as an unraveling experience, played over weeks or months with plenty of air left between main campaign missions. Not only does this make the flow of the grand machinations of macro-narrative more tolerable, it lets the more compact, mission-based stories better intermingle against the larger world. These micro-narratives are where the Witcher series has been at its best, never more so than in the Wild Hunt.

We see the class struggles and horrors of war that dot many a Mature-rated game, but here things actually feel mature. Because in the middle of the bloodied bluster and sweeping score are moments of parental abandonment, domestic abuse, and strained friendships, all written with the patience to show full emotional arcs and (frequently) not allow a purely good or purely evil method of conflict resolution. Save for its fleeting moments of juvenile approaches to sexuality, this is a role-playing game that treats the player as an adult. Even when that means not letting you win every time. 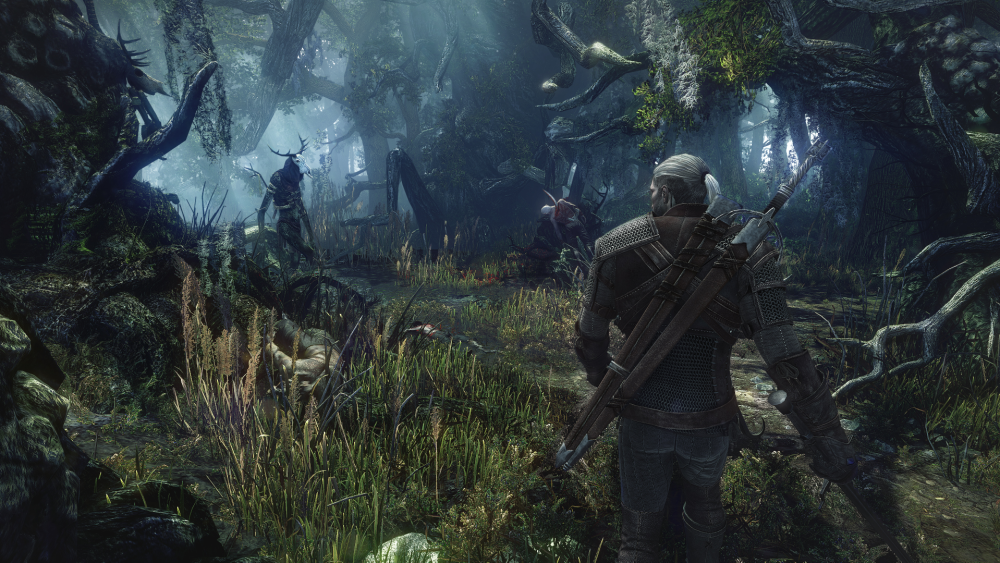 Above: The few times you die in the Witcher 3, it’s due to a lacked of preparedness.

Wild Hunt finally found the happy medium of The Witcher’s combat ideas. For two games now, we have finagled with the complex timing needed to parry enemy blows or the drawn out brewing of potions for every encounter. You still need to practice your parrying to remain lethal, but most normal encounters no longer require five minutes of switching between menu indexes. Instead, more involved encounters are forecasted at the end of a series of missions or built up to in contracts.

In fact, the research normally left up to the player is now incorporated into the run up to these bigger fights. Hunting for footprints and blood samples drives Geralt’s research in obvious directions, and a brief stopgap exists right before you trigger the encounter, so players can drink the necessary concoctions before entering the basilisk’s lair. Highlighting the interface and direct written prompts aren’t the most environmentally savvy way of leading the player on, but it is effective.

Geralt’s magical abilities, known as signs — as opposed to the more powerful spells of sorceresses — are hands-down the most satisfying component of combat. Particularly after you have upgraded a few abilities up to their alternate forms, the variety of tactics lends itself greatly to experimentation. Core swordplay is more scolding than punishing, most enemies reminding you to keep your guard up with an almost polite stab at your health. Higher difficulties allow long-time fans to relive the more aggressive fights of earlier games, but most players will find satisfaction in mastering the standard setting. 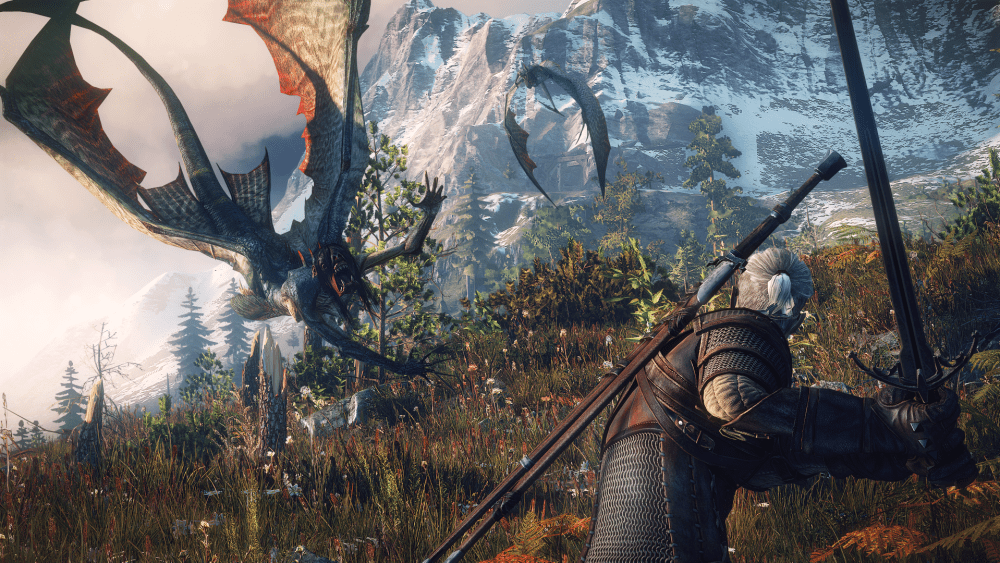 Above: Ugliness is made beautiful in The Witcher 3.

You may be getting the sense that The Witcher 3 is not the happiest game on the planet. The game’s presentation reflects the bleakness and discomfort that comprise much of the Northern Kingdoms is reflected, usually in quite an unflattering light. But that doesn’t stop it from being the most technically awe-inspiring game I have ever played. The visual assault on the senses begin with your first glimpse at a snow-capped mountain range in its first five minutes, and it continues to constantly find new ways to impress. Whether it is the distinctly orange glow of the evening sun cutting through a dense crop of trees or the hanging, rotten flesh of a drowned demon, everything sparkles (and/or reeks) of detail.

This willingness to constantly couple filth with lush greenery is as commendable as it is morbid. The universally vibrant and clean worlds of fantasy games past look excessively sanitized by comparison, as if someone covered everything in a thin layer of bleach and window-washing fluid. Given the comparable time period that the Wild Hunt takes place in, the Northern Kingdoms offer a more holistic interpretation of what an unwashed world looks like a generation before the plague (and a few more before everyone agreed to stop using the upstream pond as a latrine). Monster designs reflect this more aggressive unattractiveness more than anything; long-time bestiary staples like gryphons and cockatrices look like molting monstrosities stapled together in a horror film laboratory.

Ground and architectural textures do blur up close and some animation transitions tend to jerk, but the Wild Hunt maintains an impressive clarity outside of nature vistas and landscapes seen from horseback. Cloth and skin in particular look remarkable, with tiny facets like stitching and blotches consistently drawing the eye. Sending Geralt sprinting across a wheat field in the early morning is never an unsatisfying visual treat. But CD Projekt RED’s devotion to ugliness is what defines, and ultimately elevates, The Witcher’s visuals beyond anything we’ve seen before.