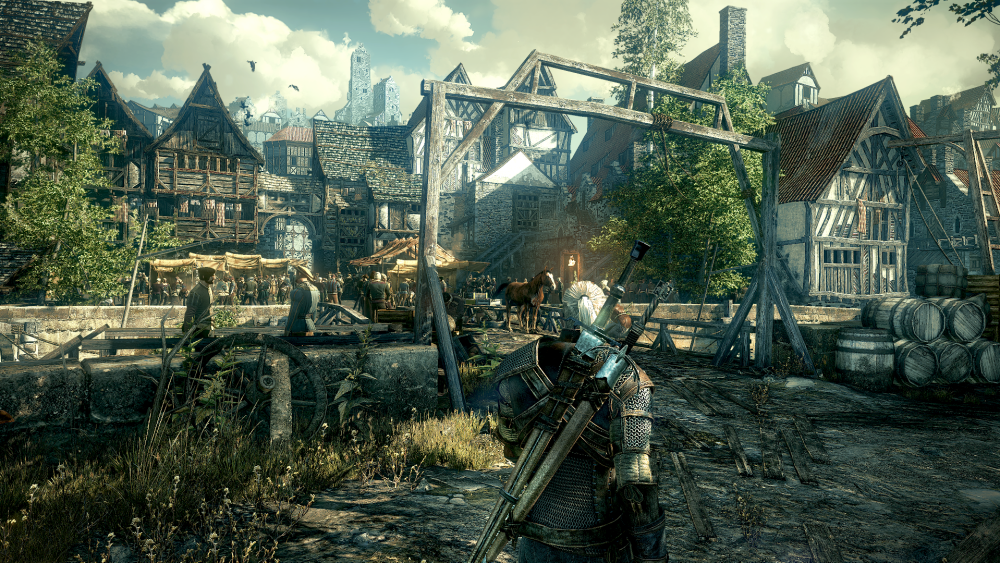 Above: It often feels like everyone in world has an errand for you to run in Wild Hunt.

The world we explore in The Witcher 3: Wild Hunt is too big. It’s all too excessive in scope, stretched overlong and dotted with too many repetitive micro-objectives to justify its obesity. In the Northern Kingdoms, you have hundreds of opportunities to do one of handful of activities, usually resulting in one of three methods of execution.

At the best of times, a contract on one of the notice boards in a town will lead to a satisfying hunt of a devastatingly powerful creature. You will haggle your price on a hunt, use Geralt’s enhanced Witcher sense to follow a trail of bloody footprints leading to a cave, prepare yourself for battle with potions and blade oils, and take on a powerful spirit with devastating sword swipe combos. In reality, most of the time you will do one of those things for 25 seconds, get a useless amount of coin and/or experience, and repeat the process in a slightly different fashion two minutes later.

These mini-objectives are completely optional, but highly marketed. The Wild Hunt’s campaign length and total time sink was a frequent boasting point for developers at CD Projekt RED, and it is disheartening to see over 75 percent of timeline come from the most banal kind of fluff. These side quests play a sad mind game on you as well, dotting your map with a hundred contrastingly white question marks with story missions taking place at opposite ends of the world to give you every opportunity to waste more time.

Even main objectives struggle under the old anvils of the RPG genre. The script is forever interrupting nuanced conversations and bending in on itself to justify sending Geralt 200 miles to his next objective. The game’s fourth and final act in particular refuses to end without another dozen story cul-de-sacs. And when he gets there, he follows a character whose walking speed is set aggravatingly slower than his and then uses his witcher sense in an insultingly small area to highlight the only obvious item before he can examine it, then talks to someone, or finally kills someone. It all feels so obligated, included as a mandatory appeasement to the days when the target audience could only afford a single game for three months. In this new hardware generation, we have officially run out of excuses for this kind of futzing about.

The digital stretch marks of a bloated game world 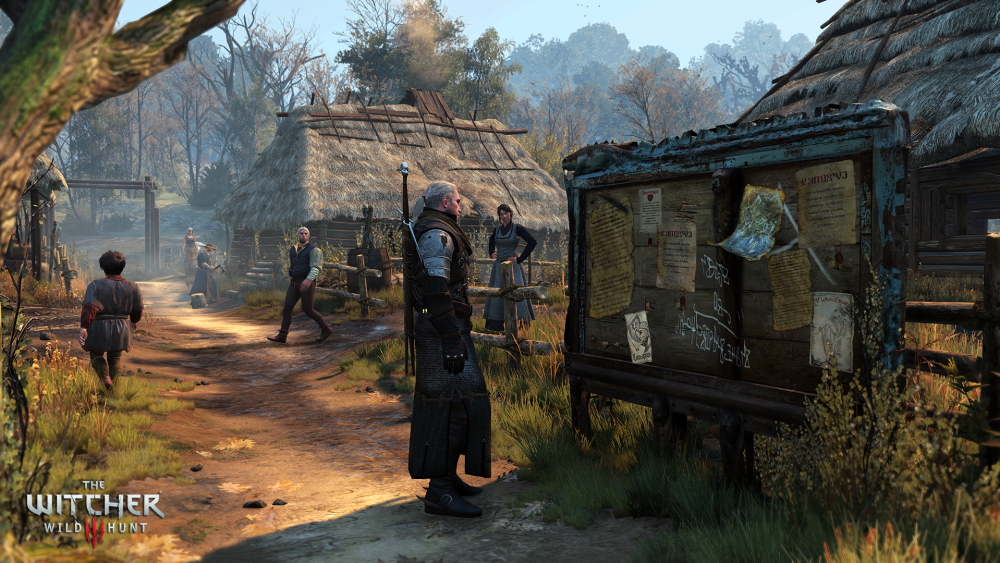 Tedious micro-objectives wouldn’t be so bad if it didn’t take you long to flit between them. If you want to cross large breadths of the Wild Hunt’s map, you must first locate designated sign posts around towns or points of interest, and then only travel between said signposts. Problem is, often times your objective is just far enough way to make waiting through the loading screens redundant, but still far enough to make for a boring trek through the same urban underside for the 20th time.

The Witcher 3 is awash in design conceits and compensations made in order to justify its size. Some activities have merit, but the leg work between you and the next satisfying moment of play is too demanding (or unrewarding) to make it worthwhile for all but the most thorough players. Nowhere is this more sadly embodied than in Wild Hunt’s in-world card game, Gwent. On its own, Gwent is an intoxicating and deep game of simulated warfare and competing card values. Every tavern owner will happily play you, and special cards are hidden throughout the world. But nothing ties the game or the pursuit of cards to the mainline thrust of the story, aside from a few achievements after 10 hours of hunting and playing. The amount of time spent deck-building and collecting just isn’t reinforced in the gameplay, likely leaving a vast majority of players turned off by the irrelevancy of it all.

I played in a pre-release state, with promises from CD Projekt RED of a Day Zero patch to on a build they were still tweaking when I received my disc. If previous games in the franchise are any indication, the studio will fix most of the more recurring minor issues (and the singular occurring major headaches). What is unlikely to change are obviously repeated building layouts and re-dressed character models.

At least let’s hope they can fix it so that Geralt’s hair isn’t constantly fluttering about in the non-existent breeze of a fisherman’s shack. The monster slayer looks like he’s in an ’80s music video a couple centuries too early. 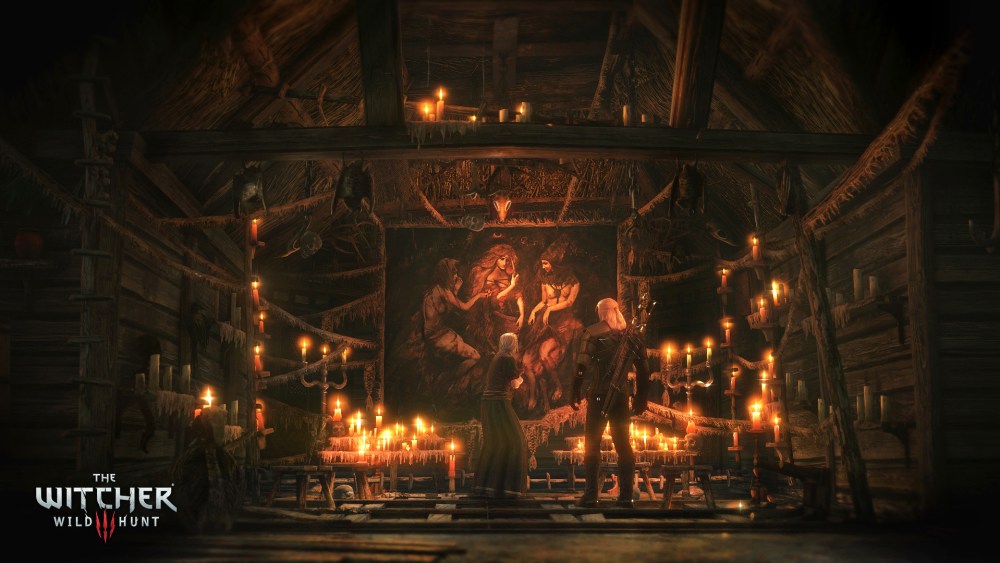 Toward the latter half of the game’s second act, King Radovid of Redania (one of the Northern Kingdoms) describes the true value of chess to Geralt. Rather than limit oneself to the minor squabbles of pawns, he suggests, royalty can take in the grander battlefield of troop movements and long-term strategy.

The Witcher 3: Wild Hunt is the most beautiful chess field I’ve ever played. The continent you explore feels alive when a storm riles up the waves around your ramshackle boat, just as the hunt for Ciri encapsulates the struggles of armies and kingdoms across hundreds of miles. But this grand scale came at a price, one of nagging drudgery and stale design crutches. But for all of its big wonders, Geralt’s final story is made of a hundred smaller ones. We see CD Projekt RED’s storytelling at its most layered and mature in the movement of the pawns, and at that level, we can best marvel at all of the engrossing ugliness that makes the Northern Kingdoms come alive.

Playing The Witcher 3 with an eye for grand strategy can be both a densely engrossing and mechanically frustrating, overlong adventure. When played one move at a time, however, Wild Hunt is the supreme alchemical distillation of the role-playing experience. It’s a bleakly human play at the heart of a dark fantasy.

The Witcher 3: Wild Hunt releases May 19 for PlayStation 4, Xbox One, and PC. The publisher gave GamesBeat a prerelease PS4 disc copy of the game for the purposes of this review.