It’s safe a safe bet that Jonathan Blow will be able to work on games in the future and deliver his latest indie hit to new platforms. The creator of The Witness puzzle game said yesterday that the game sold more than 100,000 copies in its first week and generated gross revenue of more than $5 million — an amazing sales number for a title that didn’t come from a major studio. Call of Duty: Black Ops III, the biggest of the fall’s blockbusters, made $550 million in its first 72 hours on the market in November.

The amount is small compared to big-budget games that sell millions of copies and generate more than $100 million in a week. But it’s a significant amount of money for a small team, and it’s good omen for well-known independent game developers who strike out on their own and still want to remain financially independent for the sake of creative freedom.

Blow compared the success with The Witness with his first big indie game, Braid, which debuted in 2008. In its first year, from August 2008 to September 2009, Braid sold less than 100,000 units. Braid was considered a breakout hit for a lone developer, and it’s success boosted the independent gaming scene right at the time when mid-tier developers were having troubles dealing with the high costs of HD game development for the PlayStation 3 and Xbox One home consoles. It put Blow on the map of talented game creators. But Blow spent a long time refining The Witness and used a bigger team to level up the game to the meet the ever-rising standards of high-end console and PC gamers. The title is distinct from other simple puzzle games like Tetris, and it owes its heritage more to story-based interactive games like Myst, the breakout puzzle game hit from 1993.

“This is a good chunk more revenue in one week than Braid made in its entire first year,” he wrote in a blog post.

Braid debuted on the Xbox Live Arcade and moved over to Steam later. It sold at $15, compared to $40 for The Witness, which came out on the PC and the PlayStation Network.

“By number of units, the first week of each individual platform handily beats Braid’s first week of sales,” Blow said. “This is great because as price goes up, naturally the number of units sold goes down. So the fact that we beat Braid by units, more than doubly, is a really nice success.” 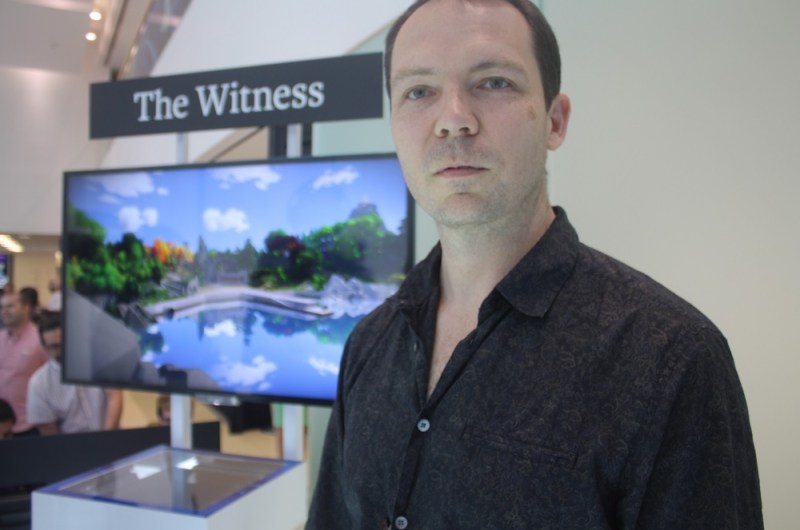 Above: Jonathan Blow, creator of The Witness.

Blow worked on The Witness for about seven years, so it will likely take a considerable amount of money to recoup his investment. Blow said that the game isn’t profitable just yet, but projections suggest that it will break even and make a comfortable margin on top of that. Blow is also considering releasing the game on iOS, Android, Xbox One, and Mac OS X.

Blow noted that he can’t be precise about sales results on specific platforms because of legal agreements. Blow also has to split his revenue with the stores and pay his team.

He added, “Finally, I want to make clear that we did not make this game in order to make money. We were trying to build a beautiful / interesting / intricate thing, first and foremost. The money just helps us stay in business in order to build new things. It is very easy on the Internet to read a financial posting like this cynically, so I urge folks out there not to do that.”

Blow fretted earlier that The Witness is being pirated in a big way, and he warned that the piracy will impact future projects. But it looks like the game is selling well anyway.

Check out our walkthrough on solving the puzzles in The Witness.