A lot of gamers consider the current Xbox 360 controller to be the best — the pinnacle of feel-right, work-right design when it comes to kicking soccer balls, slicing ninjas, speeding on asphalt, or putting bullets into zombies’ heads. And the higher-ups at Microsoft know it. That’s why, initially, they didn’t want to change anything about it for its next-generation console, which comes out Friday.

Yes, in an alternate universe, we get the exact same controller again for the Xbox One.

And from outwardly appearances, it might not seem like the company has done much to it. The familiar layout and shape are still intact. It has similar buttons, triggers, and analog sticks. And you don’t immediately notice any new features like you do with the PlayStation 4 controller and its touchpad and light bar, for example.

But how did Microsoft go from “don’t mess with it” to investing well over $100 million in researching new ideas (including a device that emits smells) — and then end up with a controller that looks more or less the same but is greatly improved a lot more ways than you’d think?

GamesBeat got an exclusive, behind-the-scenes look at the whole process, which we’ll share with you throughout this four-part series. Today, we look at early prototypes, some crazy functions that didn’t make it in, and where all that money went. 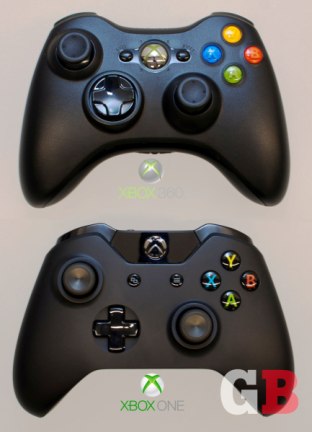 Microsoft has done a lot of research and knows full well that consumers generally favor the modern-day Xbox 360 controller over all others from the previous generation. Yet its employees know that a relevant company is never a complacent one. “We knew that there were things we could improve, even though it was the best-in-class controller,” said Microsoft senior industrial designer Quintin Morris.

Zulfi Alam, Xbox’s general manager for accessories, agrees. Years ago, without even knowing yet what he and his team wanted to improve, he was pushing for change: “When we started this program, I went and said, ‘Hey, we need to think about redesigning the Xbox 360 controller.’ The reaction was vociferously negative. ‘Are you guys crazy? This is the best-in-class controller. People love this.'”

Funny how both Morris and Alam independently used the words “best in class” in separate, exclusive interviews with GamesBeat, but we can’t really refute it. Very few gamers will say they prefer the PlayStation 3 or Wii U controllers for the most popular genres like first-person shooters. Even Sony acknowledged this and took inspiration from the Xbox 360 for its DualShock 4.

This doesn’t mean, however, that Microsoft didn’t look at what the other guys are doing. “We absolutely look at our competition, because we respect the competition,” said Alam. “But quite frankly, in the controller space, we are convinced that our device is the best in class. I think it’s a well-known fact. You double-check and look around you to make sure you’re not missing anything, but we weren’t encumbered by saying, ‘Hey, go copy that.'”

(Hmm, we wish Microsoft would stop being so coy about where it thinks its 360 controller ranks.)

The bosses eventually gave in, but they weren’t necessarily all in — at first. Caution still dictated what Alam and company could do. “We were told, ‘Fine, go ahead and invest in this space, but make sure you review and counter-review everything. Make sure you build prototypes up front. Make sure you get them tested with golden hands,'” said Alam. “That was the bar. The bar was extraordinarily high.”

Some of you reading this article might have those fabled “golden hands.” This is how Microsoft internally labels hardcore gamers who end up understanding the minutiae of the controllers better than the people who designed them. It may seem like counterintuitive business, trying to appease the core players instead of making a more mainstream-accessible input device. But 1) that’s what the motion-sensor camera Kinect is for, which is included with each system, and 2) surprisingly, this ended up being a common thread in our research into the Xbox One’s controller. Not only is Microsoft going after the enthusiast gamers, but it’s going after the most hardcore of the hardcore, including the e-sports crowd. (As you read further into this series, you’ll see what we mean.)

And keeping those golden digits happy means one thing right up front: Don’t screw with the basic layout. “People invested a lot of time in learning this,” said Morris. “The muscle memory of being able to hit these buttons really quickly gets imprinted on you, so you can do it without thinking. The people who had invested that time would lose the benefit of all their experience [if we changed too much].”