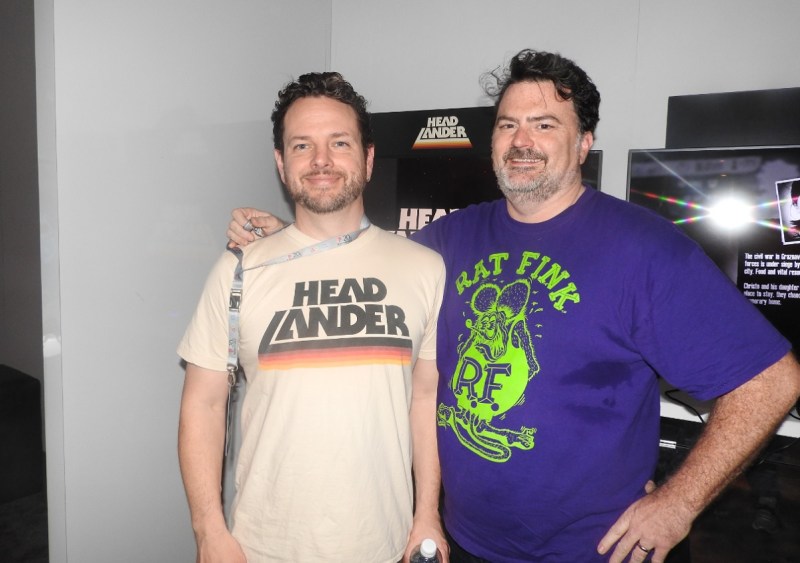 Above: Tim Schafer (right) with the creator of Headlander.

GamesBeat: Is there a reason you wouldn’t try doing that in VR as well?

Schafer: We wanted to do a kind of gameplay that was done specifically VR. I get pretty sick when I’m playing VR games. I wanted to create something that wasn’t based on Raz’s very acrobatic motion. It’s a first-person experience, but Raz is using his psychic powers to move objects around and solve puzzles. It’s still the same psychic powers, but a little less of the acrobatics.

GamesBeat: How much interest have you had in this title over the years?

Schafer: I got tweeted at about Psychonauts 2 every single day. For years it was like, “Well, maybe someday.” It’s nice to finally be able to say, “Yep, we’re doing it.” I hope that wasn’t just one guy with a million different accounts. But judging by how the campaign was going so far, there was actual demand for it. We’re already halfway funded just two days in. That’s faster than Double Fine Adventure.

GamesBeat: What’s the common thread in what you do? Is there a Double Fine theme or style?

Schafer: I think it’s characters and originality. The pleasure in making anything is showing someone something they’ve never seen before. I wouldn’t want to show people stuff they’ve already seen. The fun is in surprising people. Psychonauts is very surprising.

Schafer: It’s comfortable in that you’ve seen a Castlevania game before, but never one with that mechanic of flying around and landing on different bodies and taking them over. 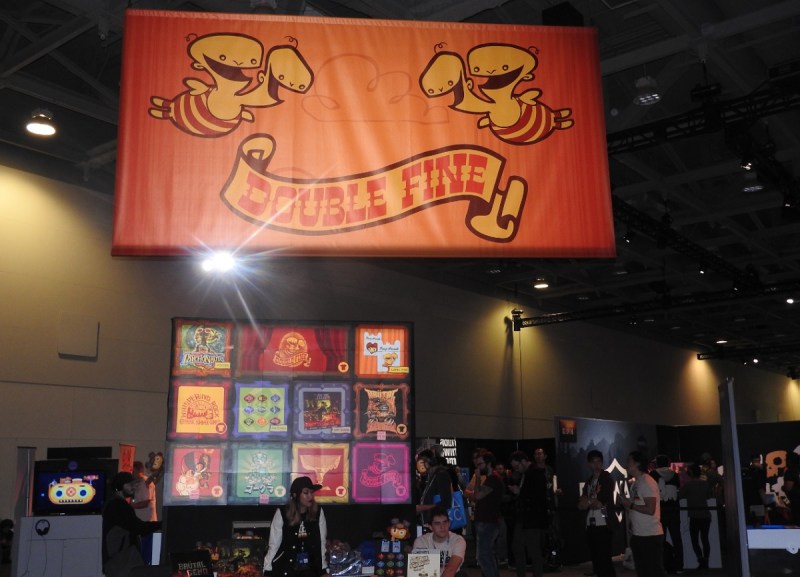 Above: Double Fine’s booth at PSX.

GamesBeat: You went with Adult Swim for that one. Why was that?

Schafer: They came to us asking about having us work on some of their properties. They knew our pedigree and wanted to work with the studio and our fans. We talked about some of the things we’d wanted to do in the past and that really stuck out. It was something we always wanted to get back to. They were excited about it and so we started pushing toward that.

They’ve been great partners for us. They’re very supportive of doing something as unique and original as Headlander. A lot of bigger publishers would want to take a safer route with that game. They’ve pushed us to try different things. They’re not afraid of making it look crazy.

GamesBeat: Is that for PS4 and Vita?

GamesBeat: Have you thought more about mobile games?

Schafer: We’d like to do mobile versions of games like Broken Age and Grim Fandango. We see it more that way, instead of making dedicated mobile-only experiences. We want our games to be on as many platforms as possible. We feel like there’s a lot more unity there. It seems like we’re playing in more of a premium space. We’re not really looking super hard at free-to-play or casual games. But it works as an extension of our current titles, when the design makes sense.

GamesBeat: It seems like you guys are in a good place. You’re not expressing too much angst here.

Schafer: Crowdfunding has been really good to us. Our community always has our back when we need them. We want to start giving back to them. That and self-publishing. Our recent efforts to get our projects self-published on new platforms have been paying off for the studio. We’re publishing other people’s games now, too, like Gang Beasts.

GamesBeat: It sounds like it’s still quite a bit of work to get crowdfunded titles to the proposal stage.

Schafer: Nah, they do it by themselves, don’t they? We just crowdfund it and it writes itself. But no, as soon as Broken Age shipped we went right into planning this one. It’s been fun. But it is a lot of work. And now that it’s started we want to have new stuff every day. I think a lot of campaigns miss that. When you’re running a campaign you have to talk to the backers every day and give them new stuff and give them a reason to come back again.

GamesBeat: The regulations on Fig are still phasing in, right? You can probably do more in the future.

Schafer: Right now the unaccredited investors are reserving their investments in the game. It’ll actually be processed when the law goes through, sometime early next year.