Steven Gallagher sure knows how to set a mood. With his sweeping hand gestures and dramatic intonations, Thief’s narrative director introduced us to Garrett the master thief and the world he lives in. In hindsight, the theatrics (you can see a similar performance here) might have been a bit gimmicky, but at the time, he had me hooked.

Last week, developer Eidos Montreal and publisher Square-Enix showed a new build of Thief, a first-person stealth action game coming out on Feb. 25, 2014, for PC, PlayStation 3, PS4, Xbox 360, and Xbox One. Thief originally emerged in 2009 as Thief 4, the third sequel in the classic PC game series. But after years of experimenting with different concepts, Eidos dropped the number and turned it into a reboot.

Aside from what senior producer Stephane Roy called “narrative concessions” — which I interpreted as dialogue or cutscenes that were left out — everything in the demo occurs about an hour after Thief begins. 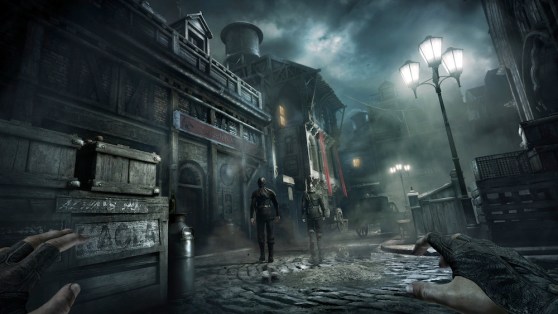 Above: It’s better to avoid guards than to fight them. Garrett can only take so many hits before he dies.

One night in the City

The City — the generic name given to Garrett’s urban playground — was just as dark as the room I was playing in. Only a light, eerie fog punctuated its shadows. Torches and electric lamps lived side by side in the thin alleyways and streets. Some doors and gates even required a little wire cutting to get pass them. It’s as if the City was struggling to modernize despite its rampant poverty, greedy barons, and disease-ridden slums.

Garrett also seems like he’s stuck between two different time periods. When a job is active, a small white circle on your minimap tells you where it is, but you can’t place custom waypoints on your own. He has both high-tech arrows — some of which spews gas (disabling guards) and water (putting out fires) — and normal ones, like the rope arrow that lets him climb up to higher places. You’ll have to use both types to complete your missions.

My first goal was to visit Basso, an old friend of Garrett’s who immediately put me to work. He wanted me to steal a painting, a watch, a small mirror, and a pen. Some of these jobs were as simple as breaking into a room through a loose window and digging through a few drawers. Others actually dropped clues that led to bigger side missions with more nuance. One of these began because of a note I found on a dead body, which told me about a precious mechanical hand that I could find at a shop.

As soon I as got there, I was given optional secondary goals — don’t knock out or kill anyone, remain undetected, and grab all the loot — that the previous jobs didn’t have. I ended up failing all of them; you get a nice gold bonus if you nab all three. And with a handful of guards roaming around the building, it almost felt like a challenge level that was separate from the main game.

I snuck in from the top floor and worked my way down to where I peeked behind a curtain to see the shop owner arguing with one of the men. I ignored them, cracked the safe (took me a few tries to finish its tough lock-picking segment), and went back upstairs to see that the owner had died. The guards frantically looked around for the hand as I quietly escaped.

The other two side missions were harder to find due to a combination of odd game-design choices and missing textures. In one room, I grabbed a hand-drawn smuggler’s map that marked a secret place where I could get more gold. Since it wasn’t an exact replica of the in-game map in the pause menu, you have to flip back and forth between them to figure it out. Then I needed to look for a switch, which ended up behind a bed’s headboard. Even though it was clearly within arm’s reach, I had to use my blunt-tipped arrows to activate it.

It was the same case with the last job. A ledger tipped me off to another gold stash, but when I reached the location marker, I had no idea what to do. I ran around for a few minutes and used Garrett’s Focus ability (it highlights objects in the level you can interact with), but I found nothing. Turns out, I wasn’t doing anything wrong. A Square-Enix representative later said you’re supposed to see a long wire wrapping around a building when Focus is on, but it wasn’t working in the demo. That led me to another switch that, despite it just being under a desk, only worked when you shot an arrow at it.

While not everything was intuitive and it took some time for me to adjust to Thief’s gameplay style (compared to the parkour-heavy action games I’m used to, Thief is deliberately slow), I did enjoy the two hours I spent with it. The City looks like it’s going to be huge — I kept running into developer-placed signs that locked out many areas you can otherwise explore in the full release — and I’m excited to see what else is hiding beneath its gloomy skyline.