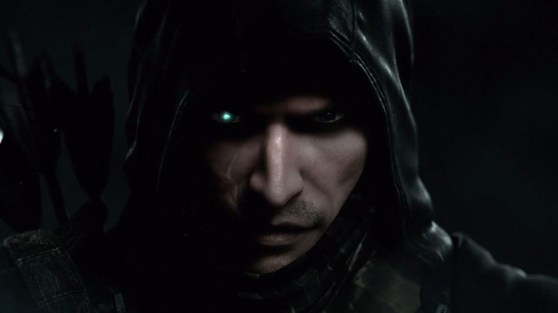 LOS ANGELES — Perched up in the darkness on a stone pillar, watching a pair of guards patrolling the small outer courtyard below, I did what any reasonable thief would. I pulled out my bow and shot one in the chest just to see what he’d do.

I did have my reasons. When Eidos Montreal unveiled its reboot of Thief (due 2014 for PlayStation 4, Xbox One, and PC) back in February, the demo team essentially turned the enemy A.I. off. That sent a lot of bad signals. As a franchise, Thief built its stealth-based legacy on sneaking around undetected … not much point of that when the opposition is deaf, blind, and stupid. Titular thief Garret spent that entire demo cheerfully slipping past people in brightly lit rooms in full view of multiple witnesses without anyone raising an eyebrow.

When I injured that guard, all hell broke loose. Not just in that outer courtyard, either. The ruckus carried over into the main courtyard on the other side of a tall brick wall, where another eight or so guards broke off their rails to hunt me down.

So Thief has definitely improved. But it’s not there yet.

This newer, hands-on demo — presented at a special pre-E3 event — takes place about five hours into the campaign and tasks Garret with slipping inside a fortress-like manor house to rip off the Heart of the Lion. Garret admits he has no idea what the hell that is outside of “priceless.” Really, that’s enough. A full-scale riot in progress just outside the walls has the guards on edge and distracted. Opportunities don’t get any more golden.

Taking advantage of them is another matter. Once I started to play Thief “for real” — that is, stealthily — I ran into several roadblocks, not the least of which was that A.I. It stomped on me with alarming regularity. That’s as it should be if you screw around in a stealth-focused game, but their attentiveness went all over the map. Distractions might work once, but never twice. That left me trapped behind shrubbery, back against a wall, while two guards refused to budge or turn an inch no matter what I did. Fortunately, sneaking up to sap a chump or pouncing them from above for one-hit knockouts feels as satisfying as ever.

The tools in Garret’s arsenal also need some tuning. Harmless blunt arrows — joining rope, water, fire, and steel-tipped arrows — should’ve drawn guards away to investigate. I tried one on a nearby wall. Nothing. On the ground a few feet away. Nada. On a guard’s foot. Nary a twich. Square in the face. “Is someone there?” I was running out of blunt arrows.

I eventually just slipped past him using Garret’s silent dash move. That worked, though I honestly felt it shouldn’t have.

The level itself benefited from a lot of nice design work and smoky atmosphere, balancing threats and solutions nicely while offering multiple paths to every goal. In an earlier presentation, the demo driver bounced off a suspended crate to enter the manor house through the attic. I went in through the basement … the heavily booby-trapped basement. Luckly, Garret’s not a novice, and his Focus abilities — heightened perceptions honed through years of professional crime — lit up the dangers and led me to their control box. Snip-snip.

Then I opened a door right with a pair of guards right on the other side and got a taste of Focus’ offensive uses. Time slows and blips appear on your opponents; you have a second or two to target them with your sluggish cursor. It’s surprisingly tough to score a headshot, but the guaranteed kill makes it vital to pull off in a bad situation. When your Focus meter empties, just two guards can finish Garrett off without breaking a sweat. This isn’t a “play it your way” kind of game at present. You hide, or you die.

I shot a rope arrow into the ceiling, climbed up, and skulled through the rafters instead until I located the Heart’s secret room, and then used Focus to find its even-more-secret latch, hidden behind a picture frame. Even more reason to avoid combat and save your Focus for the task at hand. Focus also helped with the puzzle built into the chest containing the Heart. Lesson: Conserve that Focus, people.

As yet, I haven’t seen Thief’s three-act mission structure — infiltration, theft, and escape — uninterrupted. Blocks were chopped out from each demo to remove story spoilers, so it’s tough to tell how well the missions flow. I can say the demo ended on its worst note: a run through an inferno set by the rioters.

For all the pulse-pounding scale — people on fire throwing themselves into the river, split-second grapples, and rooftops collapsing under your feet — the game’s mechanics drained every ounce of urgency out of it. You run at Thief speed — deliberately, which is to say, slowly. For the most part, you cross a hazard, look around until the interaction prompt appears, and repeat. Garret even says, “I have to move fast!” But he doesn’t. Even the final jump to safety comes out of nowhere, a finale without a crescendo.

As-is, that sums Thief up. It looks like a good game, but it’s not actually a fun game. Yet.

Games like this work — or don’t — because all the different systems find that find a balance. A lot of Thief’s systems still need a lot of balancing, but the team at Eidos Montreal still has another year of development time to get everything working in unison. This Thief is built on good bones. Now it all just needs to come together.