I’ve seen the future of Halo: Nightfall, and it’s ugly.

About three weeks ago I reviewed the first episode, which chronicled a biological attack on a remote space outpost that leads a military crew to tussle with smugglers and aliens. Jameson Locke is a squad leader from the Office of Naval Intelligence (ONI), a division of the United Nations Space Command military outfit, familiar to players of the Halo sci-fi first-person shooter games.

Alas, my prayers that Mike Coulter (The Good Wife) could use his acting chops to make something of the role were dashed against the endless rocky landscapes he and his coactors are marooned on (in more ways than one).

Dialogue that was stilted in the premiere is occasionally laugh-out-loud bad here, as the crew descends into the Pit of Self Importance. “In that moment, we were gods,” Locke intones in a voiceover. “Gods of the damned.” 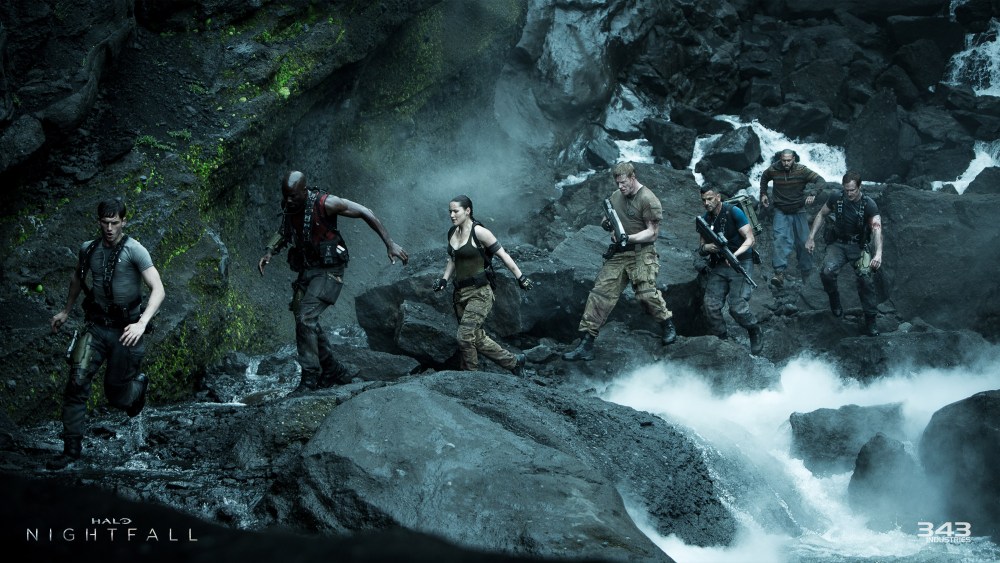 Above: Things turn bad for our Halo: Nightfall cast, and the soldiers get ugly.

The central conflict of this episode turns the squad against itself. The guys that were basically scantily clad beefcake in the first episode are now reduced to fully clothed, shallowly depicted asses, clawing for their survival on rocky alien ground.

Talitha Macer (Christina Chong of 24: Live Another Day) started as a stereotypical uppity low-ranking soldier, and she has now descended into “the character that we keep around because she looks good and she’s a pilot and we need one of those.” Even she parrots the squad in referring to herself as “a glorified bus driver.”

She can operate complex technology, but apparently, she didn’t get her uniform from the same place as the other soldiers in their loose-fitting shirts. Mercer is amazingly unable to pull up her painted-on tank top far enough to cover her attractive black bra. Eyeroll.

Locke, meanwhile, continues to have a squint as his only expression of any kind of emotional conflict, even when things are going horribly wrong. I had high hopes for Steve Waddington (The Last of the Mohicans), who plays the troubled local leader, Randall Aiken. He had some hint of gravitas in the pilot. But now even he seems irritated with Locke and the show.

The special effects continue to be good, the slavish re-creations of the Halo universe weaponry and uniforms — for the guys, anyway — are excellent, and the aliens look terrific. The editing is tight, and the shots are well framed, if not innovative. Everything seems fine until people open their mouths.

Microsoft, which bankrolls the 343 Industries series, calls Locke a “pivotal character” in the upcoming Halo 5: Guardians, due out in 2015. Internet rumors are rampant that he’ll be playable.

If you love — and I mean really, really love — the Halo games and want every hint you can get of Locke’s past and attitude and motivations prior to Halo 5, then feel free to watch. Otherwise, take a hint from the squad in Halo: Nightfall‘s Chapter 4, and do what it takes to save yourself: Abandon this series.