When I say I’m old, people tell me I exaggerate. In the grand scale of this human construct we call “time,” they’re right. I do tend to blow things out of proportion. They say life truly begins at 40, or at least I want to believe that I didn’t mishear that once.

Yet the game industry’s clock ticks several beats quicker than the real world, and nothing quite makes you feel ancient like staring at a 20th anniversary remake of a game you vividly remember playing on release in your early 20s.

Which is exactly what I was doing at Capcom a couple weeks ago. The game in question was Resident Evil 3 and … gawd … it really has been 20 years since Resident Evil 3 : Nemesis, hasn’t it?

A lot can and has changed in those 20 years. Babes become men. Norms become obsolete. And Resident Evils become Resident Evil Remakes.

Welcome back to the survival horror, again … again 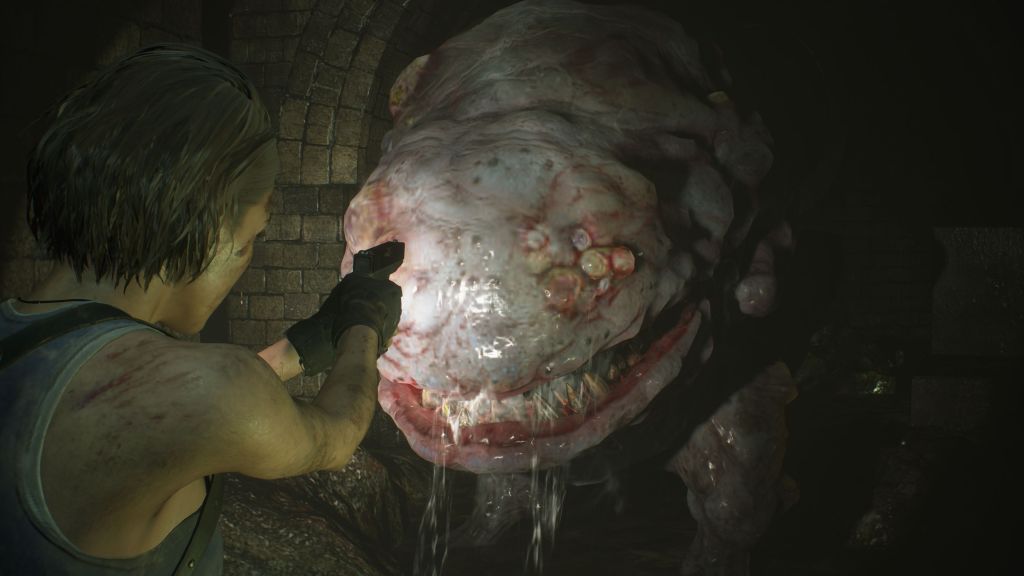 Above: Maybe I shouldn’t shoot it? Maybe it’s just ugly, but friendly?

“Reimagining” seems to be a better description for Resident Evil 3 than remake. From what I played, what remains of the original PlayStation release is more the fundamental structure and ideals:

Jill is the main protagonist: a member of Racoon City Police Department’s special S.T.A.R.S unit, trapped in an apocalyptic nightmare brought about by corporate greed. Most of the city’s civilian population is being zombified by the Umbrella Corporation’s T-Virus, and those unlucky few that have not been infected are being hunted by all manner of biological weaponry.

It’s understandable if newcomers need help unrolling their eyes from the intense blast of cliches I just hit you with. But in the ’90s, all the bio-weapons going ape and man-is-truly-the-monster themes were fresh, and the first three Resident Evil games were at the forefront of this sort of setting in video games.

Jill still has to save via typewriter save points strewn throughout the map, although the need to carry typewriter ribbons seems to be absent. Equipment management is still a big deal, where the mixing of herbs for health and gunpowder for ammunition both frees up space and creates necessary upgrades to resources. Access to different areas are still designed by an insane egotistical eccentric, that require collecting fancy bobbles conveniently left lying around and/or cryptic arrangement of things to open doors.

These are all very Resident Evil tropes.

What’s so reimagined then? 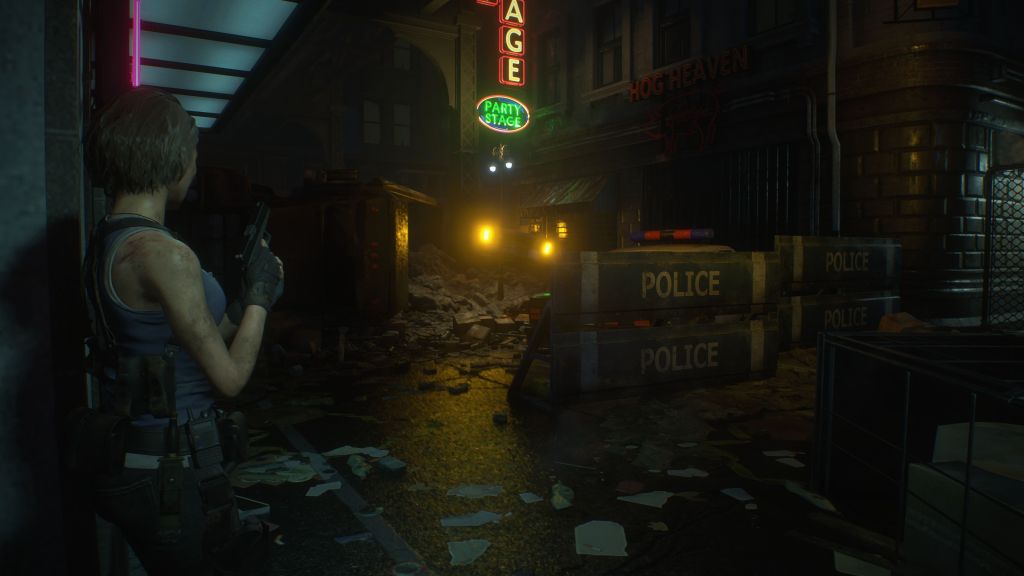 Above: What the hell happened? Did the Raiders win the Super Bowl or something?

A lot. And if you haven’t had any experience with last year’s Resident Evil 2 Remake, then it’s a whole lot.

For those that haven’t touched Resident Evil 2 Remake, Capcom decided to toss away the static camera system of the original Resident Evil trilogy for the more modern over-the-shoulder angle (introduced to the series in Resident Evil IV).

This fundamentally altered the Resident Evil 2 experience in a few key ways. For one the change improved control. The original static camera angles created amazing and unique visuals for its time, but characters controlled like poorly designed tanks.

The other huge alteration this camera system swap created was the flow and pacing of the game’s level design. In Resident Evil 2 Remake, the level layout didn’t seem too far removed from the intent of the original layout. There are differences, but key locations are familiar. 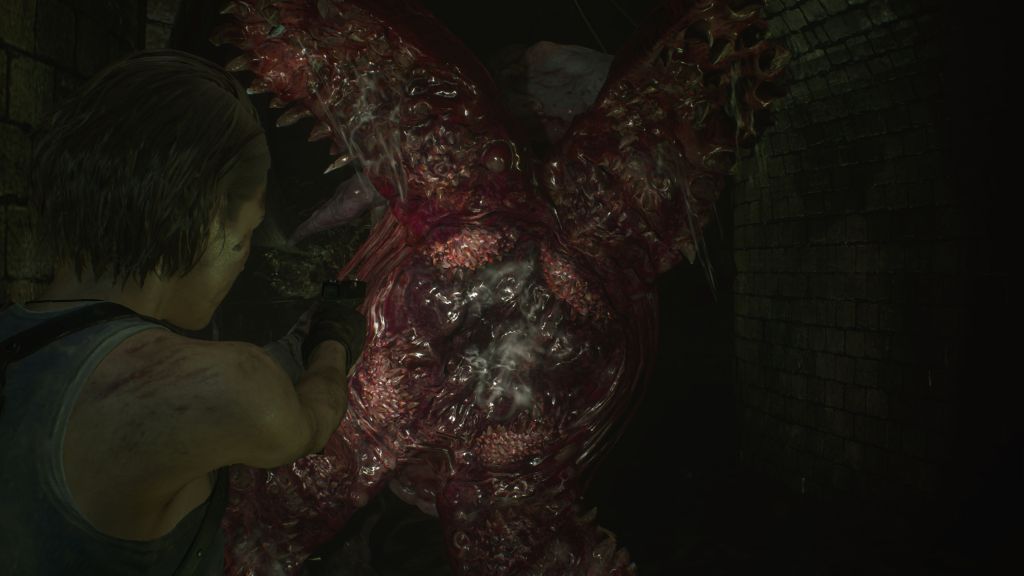 Above: Again. Maybe it’s just ugly. Being ugly shouldn’t be a death sentence.

In the chunks of the Resident Evil 3 Remake build I played, the layout and pacing felt radically different. Certain key events from the original don’t seem to happen as I remembered them, in the same time or place, which is not necessarily bad.

For one, it will keep things surprising for veterans of the original (OK. Cool?).

But for another — and this requires removing your rose-tinted glasses, purists — when I think of the original Resident Evil 3 : Nemesis, its pacing and structure is a bit scattered compared to the other two entries in the original trilogy.

There are design decisions in the original that feel like they work purely because, or were answers for, the limitations of the static camera system.

Capcom seems to have taken this situation as an opportunity to just overhaul the original game entirely, allowing for a possibly better paced and more focused game to emerge. At least, that would be my approach. And these are assumptions based off of a small chunk of the game. 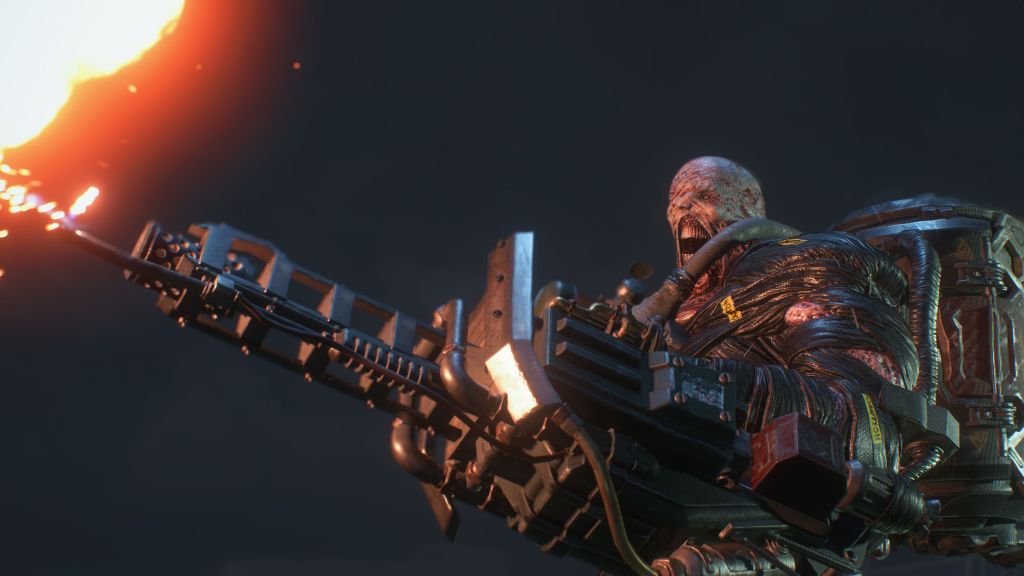 Above: So the city is holding some sort of ugly convention … rave … burning man thing? Is that what’s going on?

The original Resident Evil trilogy introduced two major creatures to the game: Tyrant/Mr.X (Resident Evil 2) and Nemesis (Resident Evil 3). They were big, vicious tank like brutes whose main goal was to relentlessly stalk players throughout the map. Design wise, they were a brilliant way to put players under the right amount of pressure, and keep the overall pacing of the game flat lining once most of the regular monsters in an area have been killed.

In the Resident Evil 2 remake, Tyrant translated extremely well to the game’s new updated surroundings. His ability to traverse obstacles in order to relentlessly terrorize the player made him, easily, the star of the game’s monster squad.

It may seem hard to think of Resident Evil 2 remake’s Tyrant as the passive one of the two, but Resident Evil 3’s Nemesis is much quicker and more difficult to elude than Tyrant. Nemesis has several capabilities that help him close in on Jill much quicker than Tyrant, such as the ability to simply leap across an area to cut off here pursuit, and a much longer attack that requires keeping a greater distance away in order to evade.

Jill can’t rely as heavily on “walking the dog”, and survive encounters by getting Nemesis to chase her around crates or shelves. He’s much more of an immediate problem that is difficult to shake loose. 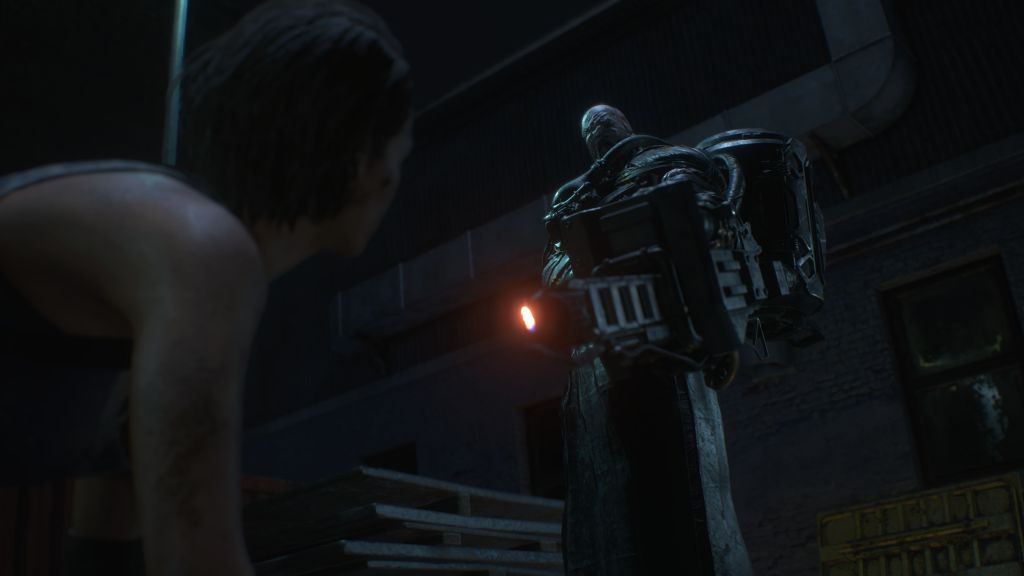 Above: That’s one hell of a novelty lighter you got, guy.

To help with this, Jill gains one thing that wasn’t in the previous Resident Evil 2 Remake: a dodge motion.

You dodge with a button press, and on its own will send Jill ducking towards the left or right (the direction felt a bit arbitrary). Timing the dodge just as a zombie is going to grab Jill, or Nemesis is about to smash her, will activate a successful dodge (indicated by a flash screen effect). The concept can be loosely described as being like a parry or a counter, except Jill is avoiding contact as opposed to making contact.

A successful dodge, however, does not seem to have a big window of invincibility. It became obvious that you can’t just dodge every attack for free without being cautious of Jill’s surroundings, as there were times where successfully dodging one zombie’s grab would hurdle Jill into the arms of another. 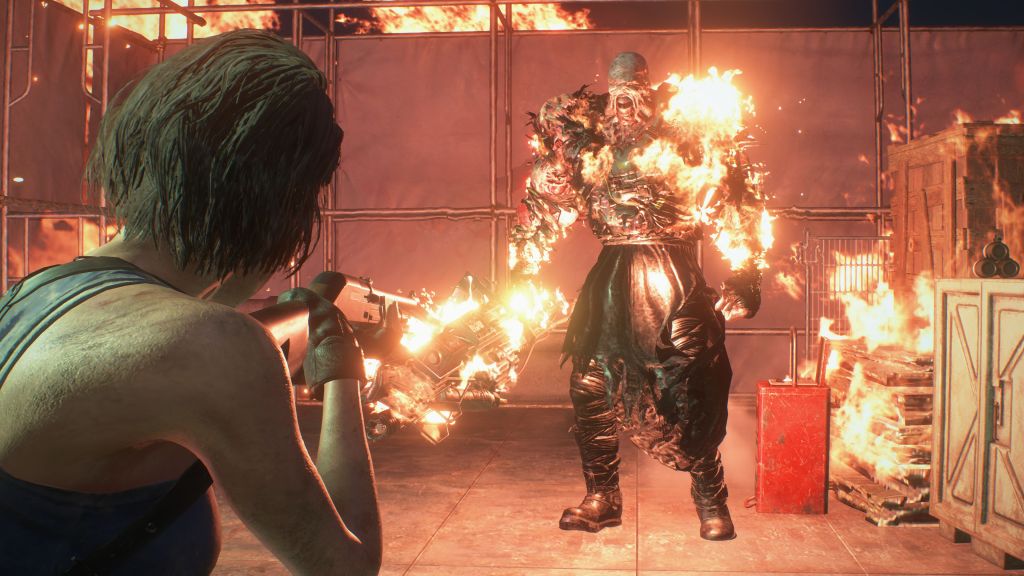 Above: Ugly and on fire. Jeez. And I am supposedly the one having a bad day here.

I picked my old carcass up out of the gaming chair, and shuffled away from this hands-on feeling like Capcom is repeating all the really good decisions they had made with Resident Evil 2 Remake. There aren’t a lot of reasons to break from what worked in that regard.

On the flip side, they are tightening up what was originally a quirky and a bit uneven chapter of the original series. Although, that is part of the original Resident Evil 3’s charm, and I definitely encourage folks to try it out if they haven’t (It’s only $6 bucks on the PlayStation Store). The new remake plays so differently, that I don’t think it will spoil anything major.