A new website called AlphaDraft is set to launch Monday, and it plans to offer daily League of Legends fantasy leagues set up to look a lot like DraftKings and FanDuel. This free service will enable you to put real money into matches in which you draft players for a day’s or weekend’s worth of games. This means that if you follow the League of Legends scene, if you know the competitors’ names and how they perform in different situations, you could turn that into cash. When AlphaDraft launches next week, it’ll first offer only virtual points for wagering, but it will shift to using a combination of real money and points as it works out any issues.

The $70-billion fantasy market for the NFL alone is an obvious reason why AlphaDraft (and companies like Vulcun) is looking to make this model work with the millions of people who watch League of Legends events. Developer Riot is already making nearly a $1 billion a year from League of Legends, and now AlphaDraft is just one of the companies figuring out ways to piggy back on that success.

“I’ve been a fantasy sports fan for around 15 to 20 years,” AlphaDraft founder Todd Peterson told GamesBeat. “I absolutely love it, and I grew up playing games. Starting on the Atari 2600, moved into Nintendo and Sega, every single platform. I love games.”

Peterson says that it was an easy leap for him to combine his two favorite hobbies into a startup — especially with lucrative sites like DraftKings proving the model can make tons of money with traditional sports.

Peterson’s original plan had nothing to do with e-sports. Last year, he attended the Fantasy Sports Trade Association’s annual event in Las Vegas with dreams of doing a site just like DraftKings and FanDuel. But he found out this sector doesn’t have a lot of room left.

“I went there and saw 25 or 30 other companies doing that, though, so I thought, well, that’s just a waste of time,” said Peterson.

About a month later, Peterson got deep into League of Legends. That’s when AlphaDraft started to take shape.

“I saw how big the audience was, and I said, well, we can apply the same fantasy model to e-sports and start with League of Legends,” he said. “E-sports has changed the way that people enjoy video games. The onset of Twitch and being able to watch all the games has made it into a real sport.” 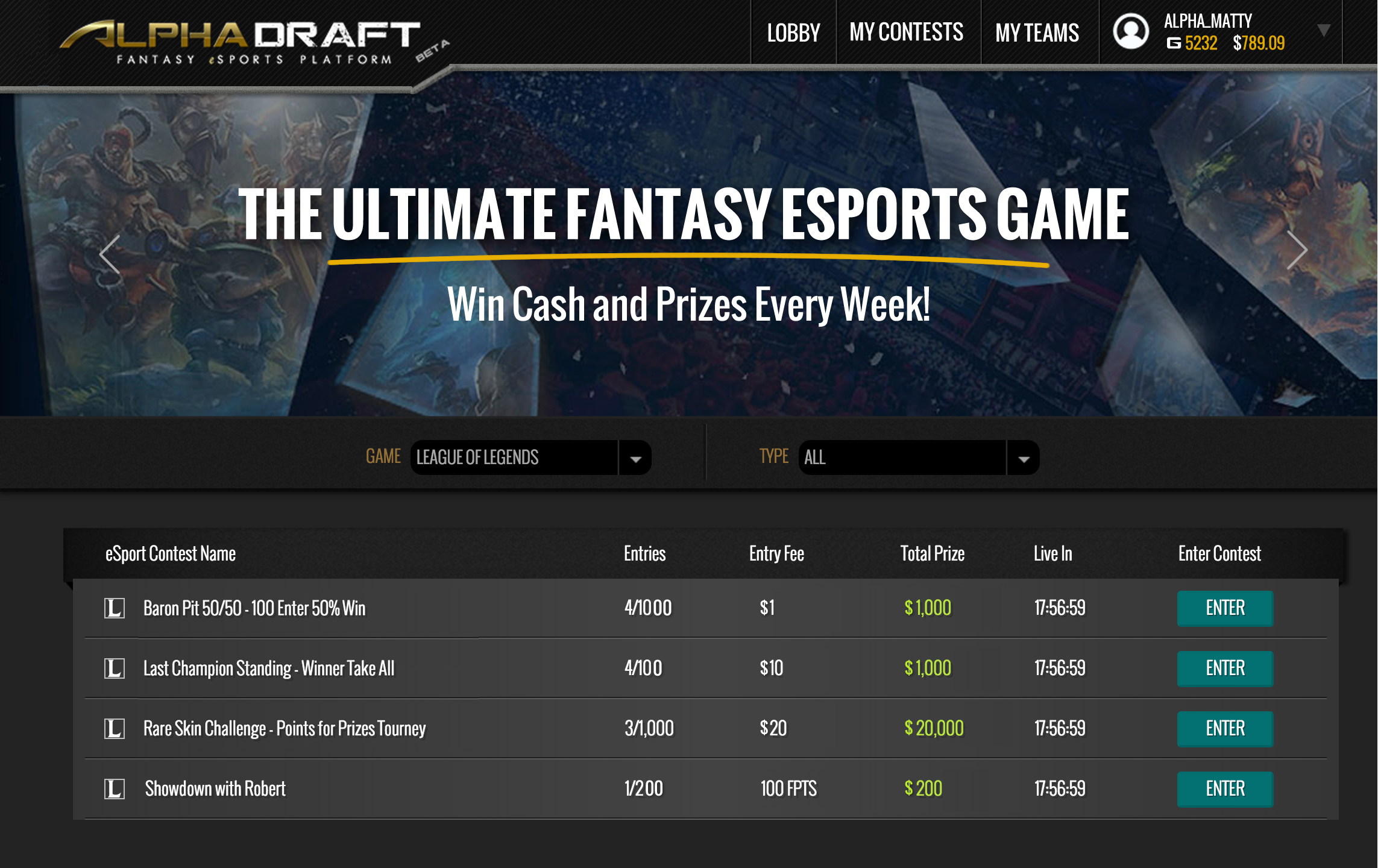 Above: A list of the kinds of tournaments that you might see on AlphaDraft on any given day.

AlphaDraft works like this. You sign up for a tournament by picking from a list of different wager levels and events — AlphaDraft makes its money by taking a small cut of every person’s real-money entry fee. Once you select, you must fill up your roster from a common pool of active e-sports competitors.

“You have a $50,000 salary cap, which you’re familiar with from other games,” he said. “Each player’s value is determined by a custom algorithm we come up with. Every week those numbers change. What you do as a player is, it’s your ability to recognize the performance, the price-performance ratio of each player. I know that Rekkles is going to be expensive because everyone knows he’s good. But who can I find who might be a value that nobody else is thinking about? That’s the skill-based play we’re looking for. Those are the users who will prove that they’re smarter than anyone else because they’re able to figure those types of things out.”

And League of Legends is a great fit for this type of action. Like football or baseball, it has a regular season, playoffs, and identifiable positions. AlphaDraft is applying the DraftKings model to e-sports almost 1-to-1. And this is the proof of concept.

If League of Legends works, AlphaDraft is already thinking about expanding to other games.