War is hell. But not just for the soldiers.

I knew it was going to happen: Just a few game “days” into my preview of This War of Mine, Marko died while attempting to mug someone for a few tins of food and some gunpowder. Then bandits killed Bruno while robbing him of our meager supplies of water, parts, and vegetables. After that, Pavle was so depressed he could barely lift his head.

So when Day 11 began with a picture of Pavle’s feet hanging two inches off the floor, it wasn’t a surprise. It was the stunningly swift, depressing end to darkest game I’ve played in some time.

And yet … the urge to start again immediately, to see whether I could save the trio and maybe some of their friends, was irresistible.

That’s what 11 bit studios is banking on: that This War of Mine’s experience of being a civilian in time of war will hook you, even if the process of making the decisions of how you will survive will, in the studio’s words, be “an often unforgiving and emotionally difficult experience.” The game will launch for PC in the fourth quarter of 2014 for $19.99.

The Polish studio interviewed survivors of the Yugoslavia conflict and a veteran from Iraq, PR manager Karol Zajaczkowski said. “We haven’t copied any event from real life to the game in 1:1 scale. We always wanted to respect the histories of those people. It’s rather a collage of the things we’ve heard … things that are an everyday struggle during the time of war.” 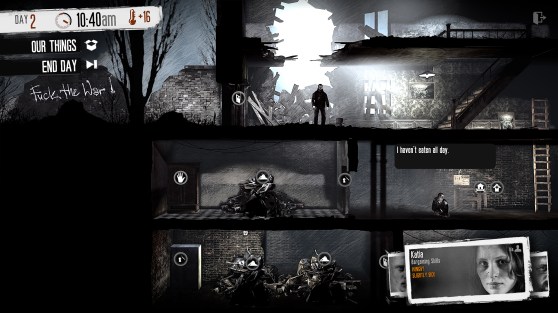 Above: Most of the action in This War of Mine is in multi-level buildings — the one you live in, and the ones you scavenge and trade in.

This War of Mine’s 2D world looks as if the 11 bit artists drew it in heavy pencil. Gameplay occurs in two phases: day and night. During the day, you rest up in your ruined multi-level home, treat illness or injuries if you have the supplies, craft new tools or supplies or the machines that make tools and supplies, and generally recover. At night, your characters sleep or stand guard.

The real survivors’ stories provided the material for those conflicts and guided the developers to choose the very basic nature of the supplies people might fight over. 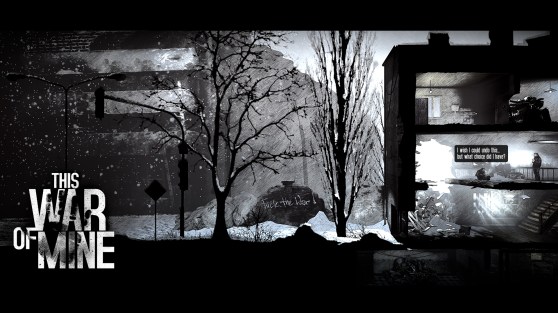 Above: Your characters can regret their decisions, sometimes with fatal results.

“Even good people at some point break,” Zajaczkowski said, “and start doing things they wouldn’t do in normal life. When it’s up to survival of you and your family, you cross the line. And if you meet such people, you can either give them what they want, which will probably kill you in the end, or you can fight, even if you never wanted to.

“Everything is connected, and sometimes you are forced to do things you hate. Sometimes people can’t handle, for example, killing in self defense, and after some time they kill themselves because of the remorse. Such things can happen in TWoM too.”

In a way, This War of Mine is like a very, very dark version of The Sims. Your characters get tired, hungry, wounded, depressed, and sick. Random things happen — both good and bad — and they’re called upon to make things and go places to do work. The salvage trips are like stealth mini-games: You peep through keyholes, try to stay silent, and see red sonar waves to tell you when others are around.

“During conflict, you never know when it will end,” Zajaczkowski said. “You just try to survive day by day, hoping that maybe tomorrow will be different.”

You hear that, Pavle? For you, tomorrow will be a better day.