Today GamesBeat reported that publisher THQ has entered chapter 11 bankruptcy protection and that Clearlake Capital has stepped in to purchase the video game publisher assets.

THQ revealed a handful of new games in the legal documents it filed as part of the bankruptcy procedure. This is a standard practice to determine the worth of the publisher’s assets.

The following games appear in a chart that lists projects currently in development: 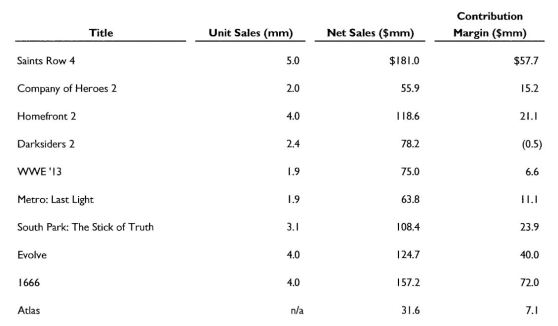 The chart that revealed these titles predicted their unit sales and net revenue. THQ expects Saints Row 4 to sell five million copies, while it predicts Evolve and 1666 to sell around four million.

Atlas doesn’t have a unit-sales prediction. In September, Atlas developer Relic posted a listing for a senior designer who could design play progression for “top quality free-to-play experiences.” It still has a list for an “executive producer (Free-to-Play)” on its site at the time of this report. It’s likely that Atlas is the game the studio is hiring for.

In February, THQ filed a trademark for Evolve with the United States Patent and Trademark Office. The bankruptcy filings reveal that Evolve is a co-op mulitplayer action game.

1666, which the publisher also trademarked, is Patrice Désilets’s game at THQ Montreal. Désilets is the former creative director on Assassin’s Creed II. He left the French publisher in June 2010. Désilets joined THQ in the summer of 2011.

[Vigil] has been the developer of the Darksiders’ series of games, including the recently release Darksiders II. The team at vigil is now developing a game with the working titled Crawler.

The filing also detailed the budgeting schedule (and therefore the expected release windows) for each of the games with the exception of Crawler. 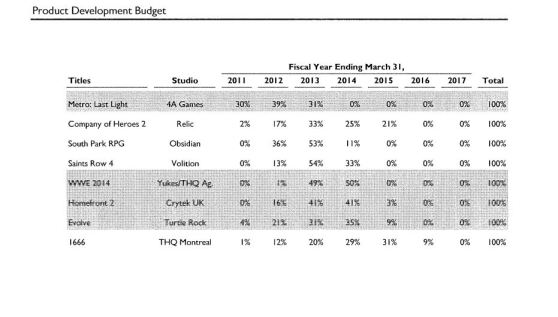 The respective studios will spend the bulk of Evolve and Homefront 2’s budgets in fiscal year 2014, which suggests the developers will finish those games and then support them with downloadable content into the next year.

THQ Montreal won’t spend nearly 30 percent of 1666’s budget until 2015. Gamers likely won’t see what Désilets has in the works for quite some time.