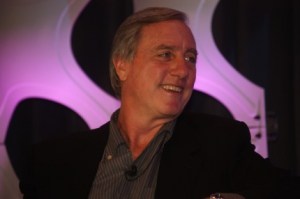 At some point, traditional game companies such as THQ will have to make a lot of strategic decisions when it comes to cloud gaming. And the cloud will surely transform the console business as we know it.

“What does cloud gaming really mean?” Farrell asked in a speech. “What does it mean for gamers? It’s a good phrase, but where is the processing done? Do you use servers or local processing? Where is the data storage?”

Game streaming companies want to host games in web-connected data centers, process the games on powerful servers, and then send video images back to users in a split second. OnLive has such a system in place now, and it allows users to play high-end games on weak computers. They can log in from anywhere, purchase games instantly, watch their friends play, and potentially pay less for games because there are fewer physical goods costs.

It’s an open question as to whether console makers would become obsolete in the age of the cloud. The cloud could actually enable new kinds of consoles that cost less money, since they could rely on online efficiencies to lower costs.

But cloud infrastructure goes far beyond the streaming segment. Valve’s Steam business delivers big digital downloads to users. Amazon can offload the hosting tasks for online games. Facebook and mobile games tap the cloud as well, since they have to use virtual goods delivery infrastructure and need to use cloud-based analytics to examine all of the data collected from gamers. And games such as World of Warcraft consume vast amounts of computing power as they deliver a huge virtual world for gamers.

The key points for whether the cloud will be good for the industry revolve around cost, content, community and convenience, Farrell said.

“The most important part here is the consumer,” Farrell said. “How can we make our players care about what we are doing with the cloud? For us, it means that our games are always on and our players are always connected.”

How would cloud gaming work?

Under game streaming, the cloud would handle the rendering, storage, game logic, and remote player interaction. The rendering is done in the cloud and only a minimal amount of data is streamed to the user’s machine, with some buffering done at the local machine. The question is whether consumers will still be comfortable not having a physical disk in their possession.

Challenges that remain include latency, or the speed of interaction on a cloud-based network. Bandwidth constraints could also matter. While high-speed bandwidth is reaching more people, the service providers are thinking about imposing more stringent bandwidth caps on individual users. That could hurt game streaming, which uses a lot of bandwidth.

An all-online network would also be a huge target for hackers. And game publishers would be responsible for stopping cheaters. Meanwhile, the benefits include the easy addition of social networks that could help games spread more easily, and the elimination of piracy thanks to the elimination of game disks.

Because of cloud storage, game console makers will no longer have to put hard disk drives on their consoles. Typically, those were the most expensive item on the machines. That means the prices for the consoles could be much cheaper, and there would be no cost related to the distribution of physical disks, as you won’t need them anymore. There are no more inventory costs, no markdowns. And users can access games from a multitude of devices. That could spur a big expansion in the audience for games.

But now the cost of storing games in the cloud will shift to the game publishers, who will have to take that into account when pricing their games.

The likely business model will be free-to-play, where the user plays for free in order to sample the games that they like. Then they can pay real money for virtual goods at smaller prices than the full $60 games. Under that model, the free users can be monetized through advertising while the paying users will often pay subscription-level prices for a long time.

“We prefer to call it free to pay,” Farrell joked. “It’s too early what the dominant model will be. Cloud gaming and its always-on nature will allow for endless versatility. If we offer the right content and keep it fresh, we keep a consumer for years with a recurring digital revenue stream.”

Experimentation with the cloud and digital gaming

Already, THQ is thinking about such digital revenue streams for its top games. Saints Row the Third, a major THQ crime game world debuting on Nov. 15, will be accompanied by about 40 weeks worth of downloadable digital content after the launch.

“We totally change how we keep consumer engaged for a very long time,” Farrell said. “We intend to create an online digital ecosystem that keeps them interested for a year or more.”

THQ has tried some digital experiments that didn’t work. Company of Heroes Online was canceled after THQ learned that the audience for the hardcore game was too narrow and the audience of paying users was smaller still, Farrell said. THQ also tried to sell its MX vs ATV Live game for just $39, rather than $59, with the hope of selling a lot of digital downloads. But the game wasn’t popular enough even at the lower price and so the strategy didn’t work.

“We experiment, but pioneers get arrows in their backs,” Farrell said.

THQ has plenty more experiments in the works, including Margaritaville on Facebook and the company’s massively multiplayer online game Warhammer 40,000: Dark Millennium. The latter game will likely require a huge amount of servers when it goes live on the first day. Farrell said the company is evaluating whether it should create its own data center infrastructure or effectively rent it from Amazon.com through its Amazon Web Services business.

Effectively, Farrell has to figure out how much of the cloud to own. His developers want to stay as close to gamers as possible to capture their feedback and revise the game quickly. They want to run the game as a service. At the same time, THQ would be better off depending on Amazon to help it deal with the rise and fall of demand for computing power. And Farrell says that if someone else can do a better job than THQ at handling customer billing, it makes sense to hand that off. And THQ has to decide upon the business model that will resonate best with players.

Farrell said that THQ supports game streaming startups such as OnLive, but traditional game retailers will likely be around for a long time to come.

In the end, Farrell said, “Great content will drive consumer demand via disk, download or a stream. We want to engage with consumers in the most direct way.”

To that end, THQ is working on turning its web site into a gaming hub, dubbed THQ Connect. That hub will be a gathering point for players to connect with each other across web, console, and mobile games. Ultimately, THQ will let the consumers choose the platform, whether’s cloud-based game streaming or retail outlets.

“It starts and ends with the player, coming down to behavior and choice,” he said. “The player is more empowered to choose the experiences they will pay for.”