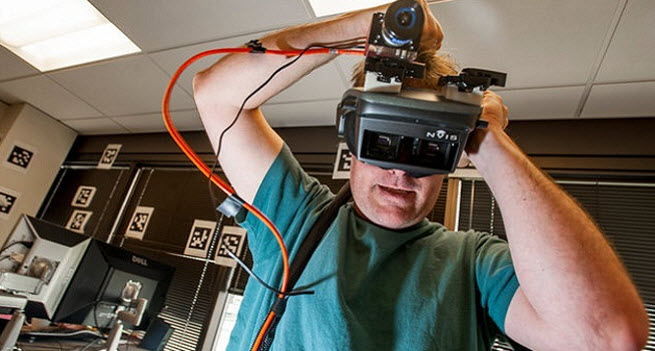 Today’s New York Times profile on Bellevue, Wash.-based game publisher Valve has three interesting revelations. It’s well worth reading the whole Sunday business section cover story, but if you want to scan for the news, here it is.

First, Valve’s virtual reality game goggles project has some working prototypes. The Times‘ Nick Wingfield got to try them out and described them as “a 22nd century version of a View Master.” Mike Abrash, a key technologist on Microsoft’s XBox and Xbox 360 game consoles, unmasked this project earlier this year, but it wasn’t clear how real it was. Now it’s clear that Valve, a company with only 300 employees mostly dedicated to putting out triple-A games and operating the Steam digital game distribution network, is devoting some serious thinking to this hardware project. The Times appropriately notes that some think it foolish for Valve to focus on resources on hardware.

But a decade ago, skeptics also derided Valve’s launch of Steam, which now accounts for about 70 percent of the PC games bought and downloaded on the web. If Valve can contribute something beyond what companies like Google can do with its Glass project, then the company will do what it takes to get it done. The story describes how Valve has an “uncorporate” culture without an organizational chart or employee titles. Employees essentially self-assemble themselves into interesting projects — all desks actually have wheels on them. Valve encourages experimentation and exploration. And its move into the goggles is driven by its dissatisfaction with the level of innovation in computing gaming.

Second, Valve is launching a public beta test of its new television-friendly user interface, Big Picture, for buying Steam games and playing them on computers in the living room. This move could increase the options for gamers for playing games in the living room.

Third, Valve is still in a deep dispute with Microsoft over the launch of Windows 8 and its requirement that apps be distributed through the Microsoft-owned Windows app store, preventing Steam from playing a major role in game downloads. In doing so, Microsoft is starting to mimic Apple in closing off part of its ecosystem from competition. The approach has been successful for Apple, but Newell argues, in a self-serving way, that closing off avenues for innovation could accelerate Microsoft’s decline. Of course, the Times pointed to Valve’s run-ins with Electronic Arts over Steam, where Valve has insisted that it get a cut of virtual goods revenue in addition to a cut of game download fees. Valve says it doesn’t want game publishers to game the system at Steam, but it’s no surprise EA has moved to its own Origin game network and store.

This is why Newell described Windows 8 as a catastrophe during a presentation in July. There’s a lot at stake in these matters. It’s no surprise, then, that analyst Michael Pachter of Wedbush Securities values Valve at about $2.5 billion today.