My daughter has obsessed over a new mobile game called 2048. It’s a simple numbers-matching game, and everybody is playing it. The title from Ketchapp shot to No. 1 for free apps on the Apple iOS store after just 15 days, and it has held that position since last Monday. 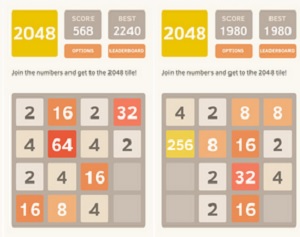 The only problem is that it’s a copycat game, as Sirvo, the makers of Threes pointed out in an open letter a couple of days ago. The letter shows the angst of modern creators who are powerless to do much about cloners, iterators, and homages that people might fail to realize are not the real thing.

Threes has been available as a paid $1.99 title since Feb. 6 on iOS and March 12 on Android. The title is currently No. 10 on the top paid games on iOS, according to market researcher AppAnnie.

That’s pretty awesome for an indie game with such simple gameplay. In Threes, the player must slide around tiles on a game board and combine 1s and 2s into 3s. Then they combine multiples of 3 to form larger numbers.

But the problem with simple games is that others can easily rip them off. And with more than a million apps in the app stores, players aren’t too picky about whether they are playing a rip-off or the original. My daughter didn’t realize she was playing a clone, nor did she really care. She was addicted, and so were her friends at school.

The Threes developers — Asher Vollmer, Greg Wohlwend and Jimmy Hinson — aren’t so worried about that game, as they noted, “It’s not very fun.” But 2048 was virtually identical with one tweak. Hacker News posted about it on March 10, and then the title took off. Now, 2048 has spawned more clones, like Numberwang 2048.

“It’s all in good fun, at least we’d like to think so, but try as our logical brains might, we still got the same ‘cloning feeling,'” according to Sirvo. “Especially when people called Threes, a game we [pored] over for nearly a year and a half, a clone of 2048. Others [riffed] off that — they thought 2048 was a better game than Threes. That all stung pretty bad. We know Threes is a better game; we spent over a year on it. And obviously, Threes is the reason 2048 exists.”

Cirulli, the maker of 2048, acknowledged that the game is “based on 1024 by Veewo Studio” and is “conceptually similar to Threes.”

Sirvo noted that the problem with 2048 is that it is too easy to beat.

“Is Threes a better game? We think so,” Sirvo wrote. “To this day, only about six people in the world have ever seen a 6144 and nobody in the world has yet to ‘beat’ Threes. But that’s what’s better to us as game designers. We worked really hard to create a simple game system with interesting complexity that you can play forever. You know, ‘simple to learn, impossible to master.'”

What’s alarming to Sirvo is the speed of the cloning.

“This sort of fast turnaround creates a lot of confusion and while it’s exciting and somewhat inevitable, it doesn’t make the aftermath easier to deal with as original creators,” Sirvo said. “Maybe not a lot of people know Alexey Pajitnov made Tetris, but of those that care about that kind of thing, it’s fairly obvious to everyone that Tetris came first. If you’re aware of Dr. Mario, you’re almost certainly aware that Tetris exists.”

Sirvo might be the latest victim, but the story isn’t new. Flappy Bird creator Dong Nguyen saw enormous success with a game that hit No. 1 in 100 countries. But he took it off the store, out of concern that players were too addicted to it. And a flood of Flappy clones arrived. King Digital Entertainment began enforcing its copyright against cloners of Candy Crush Saga. That made King unpopular, as it was enforcing its copyright against anybody who used one of the three words in its title. But King still managed to raise $346 million in an initial public offering last week.

So, the Sirvo folks feel a little fatalistic.

“The branching of all these ideas can happen so fast nowadays that it seems tiny games like Threes are destined to be lost in the underbrush of copycats, me-toos and iterators,” they wrote. “This fast, speed-up of technological and creative advances is the lay of the land here. That’s life! That’s how we get to where we’re going. Standing on each others shoulders. We want to celebrate iteration on our ideas and ideas in general. It’s great. 2048 is a simpler, easier form of Threes that is worth investigation, but piling on top of us right when the majority of Threes players haven’t had time to understand all we’ve done with our game’s system and why we took 14 months to make it, well… that makes us sad.”

Perhaps the more noise the Threes team makes, the more popular their own title will become. They could, in fact, piggyback on the success of 2048, as they can argue that their game will quench the thirst that 2048 spurs.

Distimo reported that 2048 dominates the downloads in almost every country — a reflection of the fact that it is free. 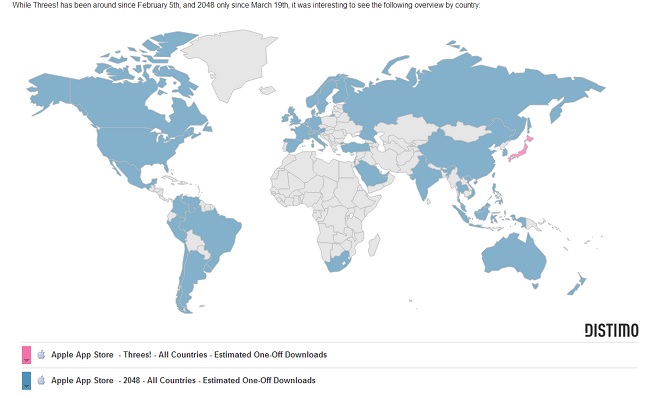