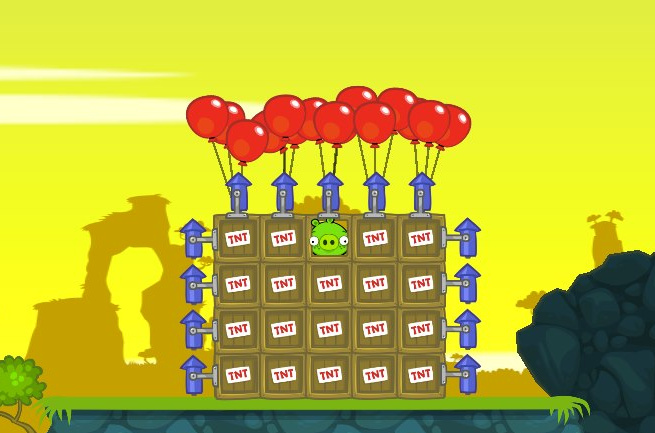 In our second Threeview, we get a critic’s, an analyst’s, and an academic’s review of Bad Piggies, the followup to casual gaming king Angry Birds.

Does developer Rovio’s new release (out now for iOS, Google Play, PC, and Mac) have the same addicting qualities and money-cloning potential as the original bird-flinger? It’s a very different game, after all. While both Angry Birds and Bad Piggies are physics-oriented, Bad Piggies is less about knocking over structurally unsound buildings and more about navigating tricky levels with homemade contraptions — like the surely 5-star safety-rated ride pictured above. See the game in action in the video below.

Our critic reviews Bad Piggies for consumers and gamers, while the analyst discusses its business aspects. Our academic wraps up with an analysis of the game design.

Bad Piggies is a valiant extension within the Angry Birds’ universe. With an intellectual property as strong as Angry Birds, it’s essential that Rovio expand its portfolio to create an emotional connection outside of the primary characters. The goal of portfolio expansion, however, is twofold: to exploit loyal users of the primary brand while at the same time bringing new consumers into your ecosystem. Loyal Angry Birds fans will not be disappointed with Bad Piggies, which pushes the physics puzzle genre ever so slightly forward. I do, however, have to question why Rovio remains hesitant to experiment with other genres.

Rovio has achieved one of the greatest accomplishments in entertainment: worldwide brand recognition. Recognition that often takes decades and hundreds of millions of dollars to achieve. With that recognition, however, comes great responsibility, and in the business world that means developing (exploiting) your brand to new consumers.

Bad Piggies is a sign that Rovio is still gun-shy on experimentation, and its lack of aggressiveness into other genres is resulting in missed financial opportunities. While there is always risk of “jumping the shark” with your brand, which often results in consumer alienation, there is also a risk of consumer fatigue. With countless popular genres outside of physical puzzles, I would have preferred to see Rovio bring its Angry Birds brand, along with its cast of characters, into new sectors. Whether that be word puzzle, pinball, or even an action-platform, there are innumerable amounts of opportunities to evolve the Angry Birds brand into newer, and arguably fresher, genres.

If Bad Piggies were released in 2011, I would hold no complaints. The title does introduce new features into the genre, and the mobile market was still too much of a rising tide to make any risky brand plays. If released in 2013, I’d hold serious concerns over management’s ability to capitalize on rising markets (genres). For now, Bad Piggies was a sane business decision, and the title serves its purpose for Rovio’s product portfolio. It keeps loyal consumers engaged, while at the same time raking in millions in revenue.

After staring at the title screen of Bad Piggies for several minutes watching bizarre flying machines go by, I’ve finally come to the conclusion that this game is about the glory days of airplane invention. And just like many flight experiments met with embarrassing disaster, so, too, did my first attempts at self-propelled Piggie-mobiles, which wrecked in mangled heaps or exploded on the launch pad, sending pigs flying. After all, you can’t build a Boeing 747 without first crashing a few wooden contraptions into Midwestern farmland, and if invention is 99 percent inspired failure and one percent success, then Bad Piggies is the perfect sandbox to demonstrate that process, because you’ll keep wanting to try until you get it.

You’ll start off building a rickety soap box derby racer that wouldn’t pass inspection but displays the concept of what a “car” is: three boxes, two wheels, and a pig. Once you’ve understood the basics of slope and weight placement, you start playing around with fans, bellows, soda bottles, and the almighty box of TNT to create odd “vehicles” that can run loops and fly through the air — or more likely, be blown to smithereens. But with each failure, you’ll get closer to the solution, which lies in either a different vehicle configuration or better piloting technique, and with each new success, you’ll earn a new toy and a new arena to test your contraptions in.

This structure illustrates a theory of game design that early levels should teach players skills needed to master the later ones, and that each level teaches the player something new. This keeps players constantly challenged with mastering new mechanics, as skills learned early on build on each other, allowing the player to overcome more complex, interesting challenges. And by having a tight balance between the challenge and skills, the designer can hopefully keep the player in a state of blissful flow.

Only here’s where I run into a problem. I found it difficult to grok the basics of such simple tools as the TNT box and the sandbag weight, even with the helpful notebook of “Oinkville Wright.” Am I just a terrible engineer, or has the game not properly explained these mechanics?

Thankfully, I don’t feel like a complete idiot, because my test pilot, a green, freckled pig with a silly stupid grin and ridiculous laugh, is an even bigger moron than I am. And that’s reassuring.