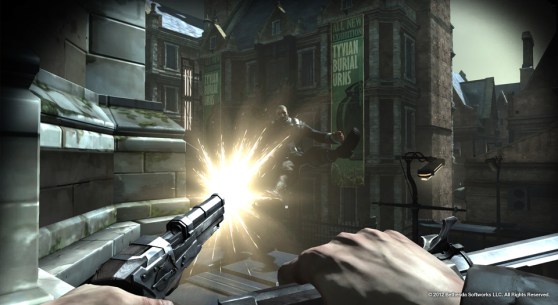 We’ve been bothering our stable of critics, business analysts, and design teachers a bit too often lately to participate in our new  Threeview series. It’s only partially our fault, though: It’s our busy season, and all these high-profile games are hitting back to back to back to back … .

Coming in the wake of a string of high-profile successes from Bethesda Softworks, Dishonored should prove another triumph for the company, which has quickly established itself as one of the preeminent names in action-based role-playing.

Stakes are high with this being a new intellectual property (IP); there’s a sizable gamble being placed here. Developer Arkane Studios’ previous works — largely cult and critical successes — haven’t enjoyed commensurate commercial uptake. However, actual execution is tremendous: The title takes its creators’ eye for atmosphere, detail, and storytelling and marries them with sumptuous play and visuals, making this among the most compelling stealth-action experiences seen since Deus Ex: Human Revolution. As such, we get a compelling, core gamer-focused outing that marries the best of old and new: Players essentially enjoy thinking man’s depth, a developer well-versed in old-school design’s eye for nuance, and gripping set pieces and action in a single package.

Given the strength of the hands-on experience and Bethesda’s marketing muscle, crossover appeal should be strong — this is a title that is expected to enjoy strong mainstream acceptance in addition to resonance with enthusiasts. Despite the dampened environment at retail, both word-of-mouth and sales are expected to perform well. Just how well depends on fans of somewhat paralleling franchises (such as Assassin’s Creed) and their willingness to accept or migrate to the offering, especially with a new installment of said series available soon [at the end of October]. However, Dishonored is anticipated to be among the holiday season’s standout offerings and a solid long-tail performer that should continue to post strong returns into 2013, buoyed by critical praise and end-user enthusiasm.

Offering extensive replay value, and among the best-executed attempts at introducing new IP that delivers on gaming’s intellectual promise as well as having arresting hands-on appeal, Dishonored is in many ways a bold and anachronistic experiment. And yet, despite being an anomaly, it may also point to the way forward for premium retail product and level of consumer expectation that will begin to surround similar triple-A productions.

Judging from the trailer alone (see below), Dishonored is about a man who stabs other men through the face with a sword. When I saw this, I wondered what would drive a man to stab a sword through the face of another man. Dishonored doesn’t seem to answer this question — head stabs make up very little of the game — but it does tell us something about assassins.

Firstly, being an assassin is hard work. They have to sneak around to avoid being seen by staying in the shadows, heading for the rooftops, and splashing through the sewers. When in combat, assassins must be good with blade, crossbow, and gun. Sneaky assassins will drop behind unsuspecting enemies and choke or stab.

Likewise, being an assassin is complex. Protagonist Corvo has many tools at his disposal (magic, crossbow, sword, gun, and stealth), and each tool has its own set of controls. Obviously, Corvo has trained for many years to become proficient with these weapons, just as hardcore players spend countless hours mastering games. An assassin thus feels natural in his body, just as players feel the controller is a natural extension of themselves.

Assassins must also be spatially aware. Just as Jason Bourne can naturally judge the fighting skills of everyone in a bar at a glance, so too can an assassin recognize the quickest route to the rooftops, the entrances to sewer grates, and understand the natural patterns of the guards. Players use these skills to reach their goals as quickly and quietly as possible.

Given this profusion of choices — weapons (and coordination to use them) and paths (and the ability to recognize them) — assassins must also be decisive: Think too long and you’ll get stuck, caught, or worse.

Assassins are also most interested in high-profile targets. Golgo 13 assassinates targets for $1 million apiece, but he makes no extra money for collateral damage. Corvo, on the other hand, assassinates for free, and head-on fights with guards will likely result in injury, reinforcing the need for stealth. Killing guards also gives pitiful reward — when you loot their bodies, you only find they make about 20 coins a day, roughly the price of a crossbow bolt. Putting their salary into perspective adds to other subtle clues, such as the game’s mention of “wailing widows” and check boxes for no-kill mission completions.

These lessons come from a long history of stealth games — from Metal Gear Solid to Thief — and suggest not only an informed design staff but also an experienced userbase. However, for newcomers to stealth — especially first-person stealth games — failing at being an effective assassin might make the player wonder if the torturer smacked a few too many brain cells out of Corvo. While experienced players can put on Corvo’s mask with ease, for newer players, it will take several hours to become a proficient head-stabber. In the end, though, it’s a whole lot more efficient than spending years of training in assassin school … .

Final academic’s score: 85/100
Note: This score does not represent the design of the game as a whole, just the portion covered in the review.