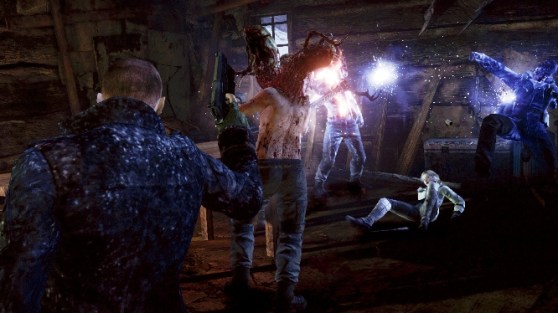 I don’t want to bum anyone out, but this might be our saddest Threeview yet. Resident Evil 6 recently hit store shelves for the PlayStation 3 and Xbox 360, with a PC version due out soon, but the longtime “horror” (in quotes for a reason — see below) series seems to be flailing about like a no-legged zombie. Reviewers and fans have been quite vocal about their displeasure with this latest edition.

Our GamesBeat critic, an industry analyst, and a game teacher break down what exactly went wrong with publisher/developer Capcom’s latest Resident Evil.

Let’s face it: Bad reviews kill, and Resident Evil 6 received a slew of bad reviews.  A “normal” RE game should be counted on to deliver solid review scores (that is, above 80 out of 100), with RE4 receiving an average Metacritic score of 96 and RE5 getting an 84. The game’s history has been mixed, with some versions of the game scoring in the 70s, but solid scores have been the norm for the series.

This version’s Metacritic average of 66 on Xbox 360 is all but certain to guarantee disappointing sales. The relatively weak review score is compounded by the fact that the game launched in the same window as highly regarded Dishonored (high of 92 average) and XCOM (89) and followed the immensely successful Borderlands 2 (91). In my view, gamers have a lot of solid choices to spend their hard-earned dollars on, and the sixth (or seventh) edition in a series that is already getting long in the tooth is not going to command a lot of attention with middling review scores.

RE6 is a symptom of a greater problem in the video game industry:  a low tolerance for risk by publishers leads to “safe” choices (meaning sequels) that don’t provide sufficient opportunity for innovation. It’s easy to see that RE6 was a safe choice, given the phenomenal success of most of the game’s earlier iterations; this time, we think that the safe bet wasn’t so wise.

Although some of my other comments may suggest otherwise, I really don’t think gamers are stupid.  Most gamers want a good value for their money, and a game with an average Metacritic score of 66 is not going to provide much value, particularly when the game is on the shelves next to significantly better games.  Of the 59 reviews of Resident Evil 6 on Metacritic, 25 were above 75 and 34 were below, with a high of 95 and low of 20.  My personal favorite reviewer, Jim Sterling from Destructoid, gave the game a 30.

I have to go with the critics: Resident Evil 6 is a bust.

A hunched zombie rips apart a hapless victim, flesh stretching string-like from wet, peeled-back lips. He turns. He shambles towards the camera, moaning. Leon Kennedy raises his gun. “Mister President! Don’t make me do this!” Not bad for the first 20 seconds.

However, this is as horrific as Resident Evil 6 gets. The rest is mostly punching and shooting. And more punching. You rarely conserve ammo. You rarely feel uneasy. It’s not horror, let alone survival-horror. It’s as horrific as Castlevania — an action game with zombies in it. The designers call that “horror entertainment.”

Horror stems from one’s confrontation with mortality, primarily through fear, shock, and disgust. Fear comes from confrontation with impending death and anticipation of pain … shock from how sudden or violent it is. Disgust is abhorrence of the human body’s decay or destruction — a rotting corpse, severed limbs, oozing entrails. If fear, surprise, and disgust are spices that make good horror, what does that make RE6?

In Resident Evil 1, a single zombie can — and will — easily kill you. They’re also rotting and grin hideously as they do it. Your shorts turn brown as they advance because you know that a.) they’re going to eat you and b.) it’ll be extremely messy. And you’ll have to watch.

In contrast, RE6 zombies flail around, and you can shake them off easily. Unless there’s a mob, you’re in little danger of even being severely maimed. If you die, you don’t actually get to see the zombies feeding. You’re never afraid for your life.

Apparently, fewer people want to buy terrifying and gory games. That’s what worried the game’s producers, who have shareholders to please. That balance between inclusion and horror they realize is “hard.” So what they came up with is popcorn horror: salt and butter to go with the explosions, but ultimately very little depth.

Horror also comes from what we imagine will happen, from anticipation. That’s why timing is so important — like when Leon enters a large, silent room, and lightning suddenly flashes. That’s why the xenomorph pounces from the shadows in Alien. That’s why in “The Raven,” the narrator opens the door to reveal … nothing.

Perhaps that’s what’s most frightening about RE6: the anticipation of what horror lurks within and what you actually confront. It’s the aftertaste from when you finally realize the king of survival horror wants to be something else. 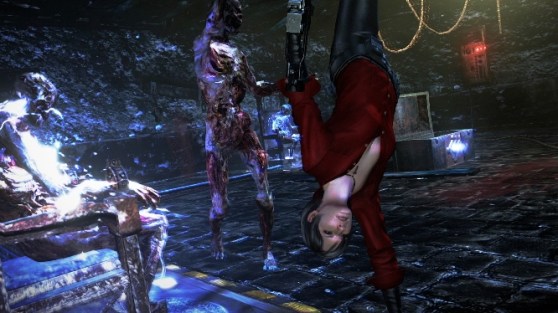