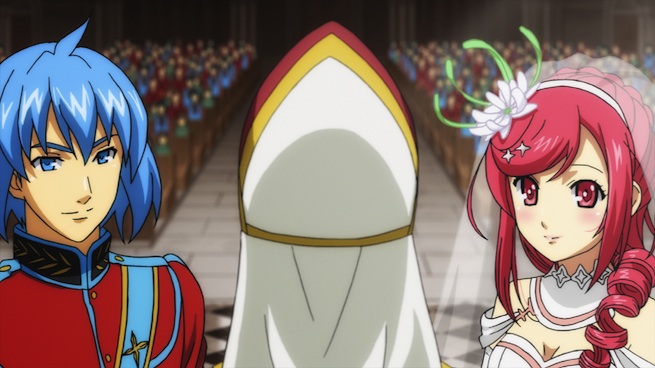 The big day is finally here. You’re ready to profess your love to your soon-to-be spouse in front of friends and family. But before you can seal the deal, a mysterious band of assassins barges through the church and tries to murder you. Meanwhile, your red-headed fiancé Toki transforms into a knife-wielding blonde woman who fights them off with ease.

At least you weren’t left at the altar, right?

Time and Eternity is one of three PlayStation 3-exclusive Japanese role-playing games that Nippon Ichi Software (better known in the States as NIS America) revealed at its annual press event this week in San Francisco. A new entry in the Disgaea series and another game called The Guided Fate Paradox looked okay, but it was Time and Eternity’s unusual wedding theme and the beautiful, hand-drawn animation that caught my eye. It’s a joint venture between NIS America and developer Namco Bandai, and it’s coming out this summer.

You control Toki and Towa, the two “dual souls” of the bride. They are traveling back in time with the former groom (whose soul is now inside a pet dragon named Drake) to unravel the mystery of the wedding crashers.

“Normal RPGs have grand and epic themes, but I wanted to do something different, something unexpected,” said Namco Bandai producer Kei Hirono, via a translator, to GamesBeat. “Marriage is one of the biggest events that everybody — maybe not everybody [laughs] — that most people have. … [Time and Eternity] kind of just happened. It wasn’t planned or anything. My marriage and wedding happened around the same time [as development].” 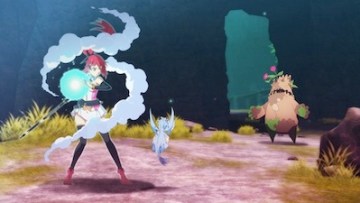 The developers incorporate much of the story and personality between Toki/Towa and Drake into the gameplay. Toki/Towa will transform into either of the souls when she levels up from combat. While each side of her has a basic set of attacks, it also has its own powers. Later in the game, you’ll have more control over which soul you want to use. Drake just acts as an autonomous sidekick, attacking enemies on his own.

Battles in Time and Eternity happen in real time, resembling more of a fighting game than a traditional JRPG because of how fast you need to react. From the 20 minutes I played, a key part of the decision-making involved how far or how close Toki/Towa was to the enemy. Pushing up on the left analog stick causes her to rush toward the foe until she’s right in its face while pushing back down returns her to the original position.

The controls are simple: Ranged and melee commands share the same button (with your powers mapped to the others), L1 is your block (and if timed right, a counter), R2 pulls up a menu of items you can use, and rolling the left analog stick left or right makes Toki/Towa dodge in those directions. Unlike some fighting games, however, you can’t cancel a move once you’ve triggered it — the animation has to play out, making timing all the more important. The enemies I saw usually had an obvious tell to let you know what they’re about to do.

Time and Eternity is a peculiar juxtaposition of 2D hand-drawn animation (with no polygons, textures, or cel-shading) and 3D levels. It’s jarring at first as the backgrounds look somewhat lackluster compared to the detailed characters that populate the world. But after a few minutes, you grow used to it and realize that the distinctive styles actually complement each other rather well.

“It was really challenging because for anything that’s polygon-based or 3D-based, there are a lot of resources that we can use,” said Hirono. “There’s a lot of middleware, and a lot of places are already doing it — it’s easier to make something like that. But since here everything is hand-drawn, we actually had to make the game around the animation rather than making the animation around the system itself.”

Jumping into Time and Eternity kind of felt like I was in the middle of an anime movie or TV series. Though I couldn’t hear any sounds at the event due to loud music playing and a lot of people talking, a NIS America representative told me that most dialogue scenes feature voice actors. The plot was fun and lighthearted from what I could glimpse of the subtitles: Drake seemed to act as a comic relief role with his short temper and exaggerated gestures, characters questioned whether Towa knew about Toki’s marriage (they’ve “talked” about it before), and I fought two wannabe assassins named Linus and Lucy.

For Hirono, the tone was a welcome change of pace from his work on Dark Souls, a JRPG known for its grim atmosphere and punishing gameplay.

“So just like how it is with your life itself, you want to have variation,” he said. “For me, I think it was a good balance to be able to work on something dark and serious like Dark Souls and then at the same time, [Time and Eternity] is more casual and happier. [It’s] a good balance.”