Call of Duty: Black Ops III has been one of the bestselling games of the holiday season, and it’s also one of the most engaging, as players are still spending hours with Black Ops III’s multiplayer online combat. But there’s no tutorial for multiplayer, unless you count the single-player campaign and the fairly lightweight “free run” sessions where you square off against artificial intelligence bots.

Our troubles are not tiny in the grand scheme of things, as Call of Duty games have generated more than $11 billion in the past decade, thanks in no small part to the fact that 40 million or so players stay engaged with the games every month, even long after initial launch dates. Many of those players love showing off how hardcore they are, and how they can completely dominate “noobs,” or new players. As the holidays approach, you may have more time to get back into it. This guide will hopefully get you better results in what I consider to be the best shooter game of the year and the best Call of Duty game in many years.

If you’re having a hard time succeeding in multiplayer, I feel your pain. I have engaged in Call of Duty multiplayer combat for more than decade. But I often have to exercise my privilege of being a game journalist and interview the game designers for tips in what is basically a thinly disguised Call of Duty therapy session. This year, I interviewed David Vonderhaar, game design director at Treyarch, the developer of Black Ops III, for tips on how to do better.

And guess what? I’ve improved some. Not dramatically. But my scores are getting better. 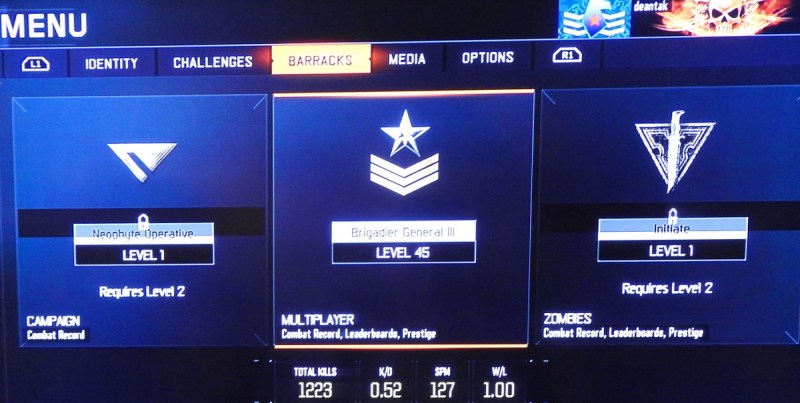 Above: This is slightly outdated, as I’m now a Major General III. Only seven levels away from the top level, Prestige.

At the time that I interviewed Vonderhaar in mid-November, I had worked my way up to Level 14 and I had a kill-to-death ratio of 0.42. For every four kills I got, I was killed 10 times. Considering that I’ve played for so long, that was an exercise in frustration. Was I really that much slower in my reaction times than the youngsters who dominate the game? After I talked to Vonderhaar, however, I started paying more attention to what was important. And I improved.

After about 23 hours of multiplayer, I’m now at Level 48, with a kill-to-death ratio of 0.53. I’ve gotten 88 headshots, six triple kills, and one thumper, or a triple kill with my special weapon, the grenade launcher. I can now manage to survive Team Deathmatch rounds with a kill-do-death ratio above 1.0, and I earn about 127 points per minute. I’ve had 1,223 total kills. I’m on the winning team about half the time. In Domination mode, I’ve secured 119 locations. (You can check these stats in the lobby leaderboards section or by hitting the Options button on the PS4. You’ll see the details on your kills in the Barracks section and your stats on game modes such as your win-loss ratio in Domination).

Vonderhaar’s tips, and more of my own that I’ve gleaned during my own play, may be broadly useful. So here they are. 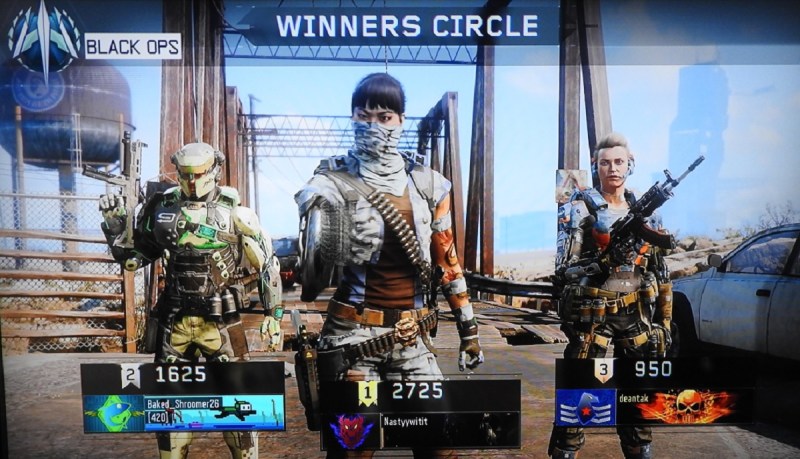 Above: That’s me on the right. I came in third in this match.

If you just keep playing, you’ll get better. You can get better with practice. Try a variety of maps, modes, and weapons. Figure out what you’re good at. Resist the urge the jump too much, even if it is fun. It just makes you a target until you master shooting while jumping. And make sure you warm up first and then get serious. With every step up, you can celebrate. And once in a while, you’ll get in the top three scores in a match.

As you level up, you also get access to much better weapons. These make you more powerful. They improve your accuracy and the damage you do, enabling you to compete with the veteran players better.

Here’s some examples of the good things you can get just by waiting. When you hit Level 9, you can unlock the HC-XD remote-controlled drone as a Scorestreak. So when you score a few kills in a row, you are rewarded with a drone, which you can pilot and use to remotely kill an enemy soldier. It only counts as a quarter of a kill, but it’s very satisfying.

At Level 12, you can get the Care Package Scorestreak. If you get multiple kills in a row, you can send for a Care Package. It will drop a random Scorestreak, including some high-value ones occasionally, that can help you rack up the kills in a match. At Level 17, you can get a Trip Mine. This lethal grenade can be planted in the ground. When an enemy runs by it, it blows up. It’s perfect for helping you watch your back while you are camping or sniping. In Domination mode, you can use it to create a booby trap on one of the three locations that each side battles to occupy.

At Level 43, you can get access to a Sheiva Assault Rifle, which is pretty accurate and deadly. At 45, you can get a Hardened Sentry Scorestreak, which lets you plant an auto sentry gun that will shoot anything that moves in front of it.