The action in Respawn Entertainment’s Titanfall 2 is going to be loud, intense, and satisfying. That’s my impression from the demo that developer Respawn showed today at Electronic Arts’ press conference ahead of the Electronic Entertainment Expo.

Vince Zampella, head of Respawn Entertainment, was the first presenter at the EA Play press conference ahead the big game trade show this week in Los Angeles. The trailer leaked earlier today. It debuts on PlayStation 4, Xbox One, and the PC on October 28.

Titanfall 2 is one of the most anticipated games on EA’s slate and in the first-person shooter community. — it sold nearly 1 million physical copies alone in its first two months. It’s Respawn’s second game for EA. The original Titanfall came out in March 2014 on the Xbox One, Xbox 360, and Windows (we liked it so much, we thought about what we wanted from a sequel in April). But this sequel is going to hit the PlayStation 4, too — and include a single-player campaign, which some players wanted in the original, multiplayer-only release.

Single-player takes you to The Frontier, where youe militia rifleman teams up with a veteran Titan pilot behind enemy lines to finish a mission.

The combat show Titan-to-Titan combat, grappling hooks, wall running, and lots of futuristic weaponry. It will have pilot progression, six new Titans, and a number of multiplayer enhancements.

“For the four people who didn’t see the leak this morning, I’m excited to announce single-player,” said Vince Zampella, cofounder of Respawn, while onstage at EA’s press event. The trailer sounds a lot like the voice of Peter Cullen, who plays Optimus Prime’s voice for Transformers. 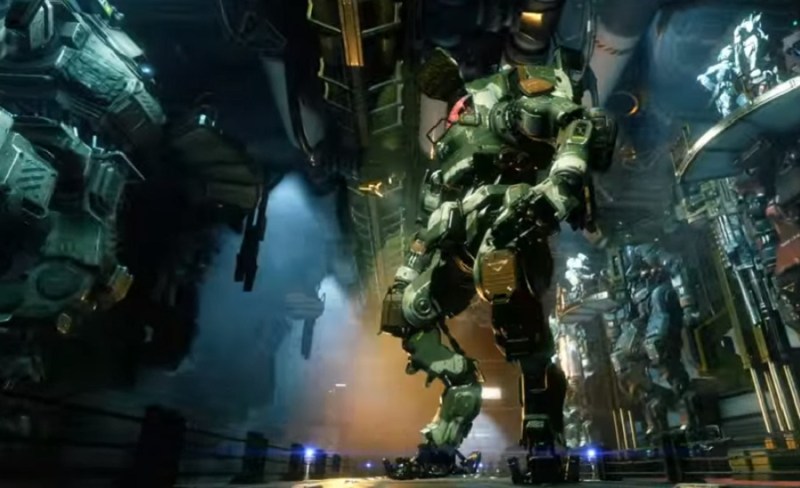