Titanfall is the first game from Respawn Entertainment, a studio made up of former employees from Call of Duty developer Infinity Ward. Coming to Xbox One and PC on March 11 (followed by the Xbox 360 version on March 25), the first-person multiplayer shooter pits two factions against each other: the Interstellar Manufacturing Corporation and the Militia. Both sides use 20-foot tall robots known as Titans and the jetpack-wearing soldiers that pilot them.

Since switching between a pilot and Titan is a little jarring when you first play, I decided to break them down to their essentials: how they move, how they fight, and how they work together. The information here might just give you an edge during the public beta happening later this month for Xbox One and PC. 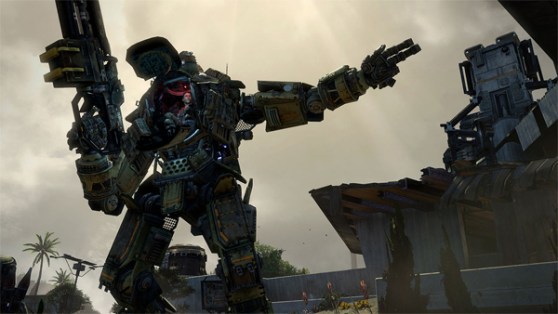 When I asked Titanfall’s lead designer, Justin Hendry, for some tips, his No. 1 suggestion was to keep moving. A pilot’s most dangerous asset is their speed. With their jetpacks, they can jump twice in the air to reach tall ledges and run across walls. Skilled players can fly through maps in seconds if they chain enough movements and land at the right spots.

But movement does take a few matches to get used to. I lost count of the number of times I slammed into a wall while trying to jump from one building to another. 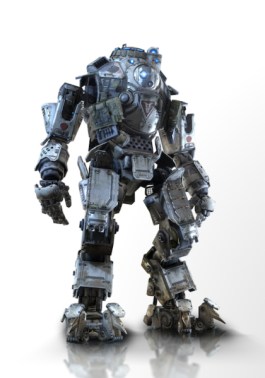 Above: This Titan is part of the Atlas line.

Titans aren’t the kind of sleek, sexy robots so often fantasized about in sci-fi stories. These mechs are slow and bulky — less Gundam and more Pacific Rim. The first thing you notice after stepping into the cockpit is the slight bob of your screen as you start moving around the map. You can feel the immense weight behind every step and every kickback from firing its impossibly large guns.

But for machines that can tower over small apartment buildings, they’re also quite nimble: Titans can break into full sprints and dash out of the way (up to two times before their stamina meter has to recover) of more immediate threats.

Once you get over the slight learning curve of bouncing around the battlefield, you’ll feel right at home with the combat controls, which Respawn wisely modeled after other online shooters. In addition to having an assortment of rifles, pistols, and grenades to choose from, pilots have a special category of weapons designed for fighting Titans, such as rocket launchers and guns that can fire small missiles. And while going toe-to-toe against a Titan is a dumb idea, you can increase your odds of surviving by turning on your invisibility cloak.

Titans are basically bipedal tanks. During my short time with the game, I used a semi-auto 40mm cannon and a quad launcher that shot four rockets at a time — pilots didn’t stand a chance against me. Instead of having a smaller firearm for backup, they have Rocket Salvo, a weapon that unleashes a swarm of rockets.

The playing field is more even when it comes to Titan-versus-Titan clashes. With so much firepower at their disposal, they can tear each other apart very quickly, which is why dashing is such a key strategy in combat. When you do lose your Titan — and hopefully react fast enough to eject out of the suit — it’s not that big of a deal. You only have to wait 2 minutes before you can summon a replacement. Players can reduce that time even further by killing A.I.-controlled enemies (Spectres and Grunts) and other pilots. 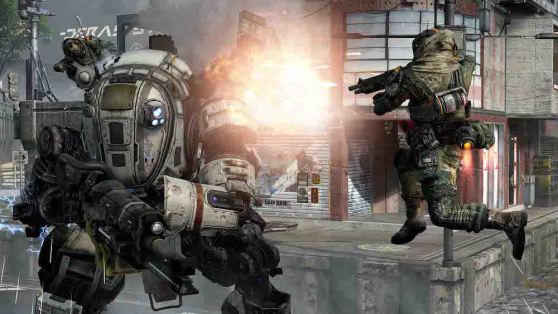 Above: This guy clearly didn’t read his “How Not to Fight a Titan” guide book.

Though matches only have 12 players in all, battles feel much bigger because of computer-controlled teammates and enemies. They come in two flavors: Grunts and Spectres. Grunts are mostly there for cannon fodder and serve as easy targets for players to pick off. They aren’t very smart, and they’re slow to react, even if one of their fellow A.I. buddies is getting shot just a few feet away. But what they lack in intelligence they make up for in numbers, making them good for distractions when they’re attacking Titans.

Spectres seem a bit smarter. They tend to maintain some distance from the Grunts. I only came across two or three of these robotic soldiers. But if you spot one, grab it! You can rewire their allegiance by hacking them, and they’ll fight for you until they die.

You don’t always have to jump inside the cockpit. For objective-based modes like hacking computers in Hardpoint, I thought Titans were more useful if I let their artificial intelligence take over. With a simple push on the D-pad, you can order your Titan to either guard the area or just follow you. One strategy I kept using was to hop in a Titan, push through to the next objective, hop out, and then set it to guard mode while I tried capturing a control point.

The Titan will let you know when it engages the enemy, and it’ll even tell you if it’s fighting pilots, soldiers, or other Titans. If the battle becomes too hectic, you can either jump back in and try to save your Titan or escape the area while it sacrifices itself.