We can finally talk about virtual reality games with a straight face.

At this year’s Electronic Entertainment Expo (E3) video game trade show in Los Angeles, a small pool of VR games held their own against a big slate of indie titles and triple-A blockbusters. This is the first year that Oculus VR, the poster boy for VR’s resurgence with its popular Oculus Rift headset, had a presence on the expo floor, an elegant booth that wasn’t too far from Oculus’s biggest competitor, Sony’s Project Morpheus. Neither company has set a release date for their devices (Samsung, the third challenger for the VR crown, is trying to beat them both to market).

I packed in as many VR games as I could into my E3 schedule, and while everything I saw was impressive in one way or another, the following games are the ones I want to play as soon as I can buy a VR headset. 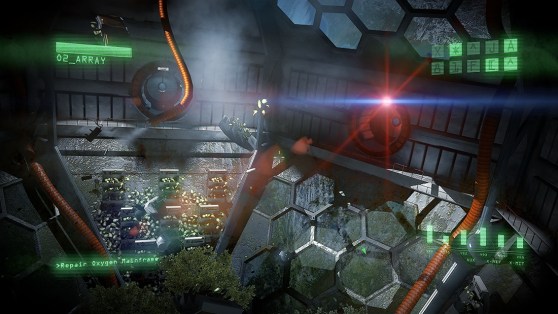 Above: You’ll have to piece together the events that led to the space station’s collapse.

Until commercial space flights reach a price level that us lowly mortals can afford, we’ll have to settle for games like Adr1ft to scratch our space exploration itch. Developer Three One Zero calls it a FPX, or first-person experience game. Partly inspired by cofounder Adam Orth’s social media kerfuffle last year when he was at Microsoft, Adr1ft puts you in the role of an astronaut who wakes up in the middle of a crumbling space station. You don’t remember what happened, and your spacesuit is constantly leaking oxygen, so you have to roam around the open-world to replenish your air tanks and solve puzzles to figure out what went wrong.

“It’s the immersion of the world in Half-Life, the minimalist presentation and storytelling of Journey, and the scope and scale of [the film] Gravity,” Orth told me.

That’s quite a legacy to live up to, but I definitely saw a lot of Gravity in my short time inside Adr1ft. Unlike actress Sandra Bullock’s character, I didn’t have to worry about satellite debris hitting me, but it’s remarkable how well VR renders that feeling of loneliness when you’re drifting in space. The demo — purposely stripped of its gameplay mechanics to “prove the awe of space in VR” — began in a greenhouse, and when I emerged from it, it was hard to not just float in place and stare at the crisp blue Earth below me. I slowly passed by other remnants of the space station while a Beethoven sonata seeped through my headphones, making me feel calm and peaceful despite the dire circumstances of Adr1ft’s premise.

It was probably the first quiet moment I had to myself all week, and it was definitely a welcome relief from the boisterous expo floor that I had walked through so much. That’s why I was a little sad when Orth tapped me on the shoulder after a few minutes, saying my time in Adr1ft had come to an end. The game will also support Morpheus, but you don’t need Sony’s headset or the Rift to play it. Three One Zero will release Adr1ft in 2015 for PlayStation 4, Xbox One, PC, and Steam machines. 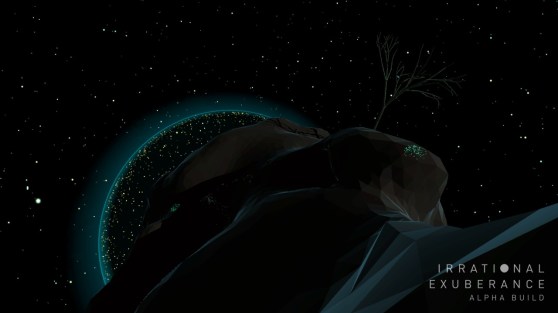 Above: Irrational Exuberance has a mystical element to it.

Irrational Exuberance tackles space exploration a little differently, moving away from realism or even sci-fi in favor of something more ethereal. I met its lone designer, Ben Vance of Buffalo Vision Games, at an independent games event outside of E3, and he was a little hesitant to tell me about the game’s plot. He didn’t want to spoil it, and even went as far as covering the outward-facing TV on his table so anyone passing by wouldn’t accidentally spoil themselves, either. I wasn’t sure what to make of this until I finally played it for myself.

Irrational Exuberance’s tagline is “a surreal space odyssey at the end of the world,” and apparently, the end of the world has a lot of polygonal asteroids in it. I started walking around on the asteroid I was on, not sure what to do. The only pieces of the level I could interact with were these particles of light that would spiral into space and disappear when you looked at it. As far as I could tell, I had to keep finding these bright clusters, jumping to asteroids below me when the rock I was standing on didn’t have them anymore.

My “aha!” moment came after finding a pile of rectangular panels that, like the particles, disappeared when I got too close. Thinking that I must’ve missed something, I intentionally tried to kill myself by falling off the asteroid, but that didn’t go as planned — I stopped mid-way through my fall. When I looked down with the Rift, I realized that the panels were appearing beneath my feet. I looked back up and saw a trail of them leading back to the asteroid I fell from.

I somehow gained the power to glide through space, and I felt like the Silver Surfer as I zipped around asteroids and stars. It was thrilling. If I wanted to go somewhere, I just needed to look in a certain direction, and the white blocks would take me there.

That was a cool and unexpected twist, and I immediately understood why Vance wanted to keep parts of the game a secret. He hopes Irrational Exuberance will continue to surprise players when he releases it for PC, Mac, and Linux.