Tobii and peripheral maker SteelSeries have teamed up to build an eye-tracking control system so that players can interact with games using their eyes.

Stockholm-based Tobii has developed its eye-tracking technology for more than a decade, and it’s ready to partner with gaming peripheral maker SteelSeries to create a version for mass-market applications such as gaming. The hope is to provide a new dimension of interaction for gamers, with richer and more immersive games. If successful, they could open a huge new market supplying devices that replace the traditional game controller that has been around for decades.

Tobii’s technology promises precision control. It uses a camera-like device to detect your eyeball in three dimensions and then determines precisely where you are looking on a screen. It has commercialized the technology for control systems for people with disabilities. And it has also built the Tobii EyeX controller that also enables clinical researchers to track eye movements for studies.

Tobii and SteelSeries will demo the system next week at the 2014 International CES, a huge tech trade show in Las Vegas.

“This is the perfect application for putting eye-tracking on the map for the mass market,” said Carl Korobkin, the vice president of OEM Solutions at Tobii, in an interview with GamesBeat.

Those initial applications have built a real business. And that has enabled Tobii to build a company with more than 400 employees. Tobii and SteelSeries are announcing a development kit ($95 show price; regular price $195) for developers to build games using the eye-tracking system. And the companies expect to launch a consumer system during the summer of 2014.

Above: With Tobii, you control objects on a screen with your eyes.

Korobkin said that the system is precise for any sort of controls, such as wielding a weapon in a first-person shooter game, shining a flashlight on an object, finding a path in a virtual reality game, or tracking how much attention a player is paying to a part of the screen.

“It opens up new scenarios that are not possible without eye-tracking,” he said.

The system could unlock new realms of creativity for game developers. SteelSeries plans to announce new details for its eye-tracking gaming peripheral over the next several months, but it should be similar to the Tobii EyeX Controller pictured below. You can hang it over a PC as if it were a relatively large (seven-inch or so) webcam. 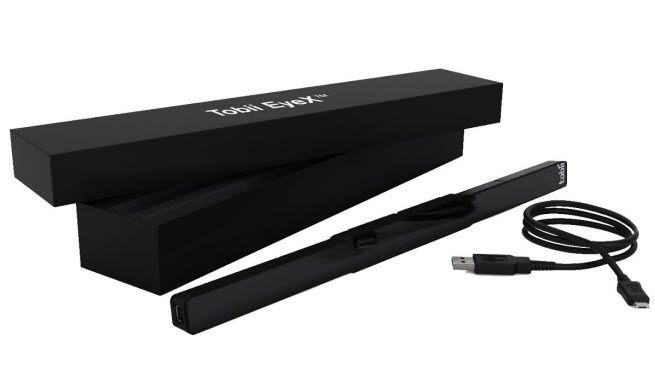 Above: Tobii EyeX Controller in its current form (this is not the final video game product).

Korobkin said that the system will be good for real-time strategy games such as StarCraft: Heart of the Swarm, where players have to dispatch large numbers of units to different parts of a map as fast as possible. A player could look at a minimap, move to a location on the screen, assign a unit to move there, and return to another position on the main map. All of that would require multiple precise mouse clicks and scrolling, but it could be done quickly with eye-tracking, Korobkin said.

“As the leader in eye-tracking technology, Tobii is positioned not only to impact but also to change the way that gamers experience and play games,” said Bruce Hawver, the CEO of SteelSeries. “Eye-tracking is something entirely different and exciting for this consumer market, and we are thrilled to be working alongside Tobii and the developer community to deliver an entirely new technology to this industry.”

Eye-tracking may not by itself be a full system for gamers. But it will be part of the mix of new input and display technologies such as virtual reality goggles, gesture control, touchscreens, and other newfangled peripherals aimed at bringing gamers inside their games in new ways.

Above: Tobii detects your eye in three dimensions. 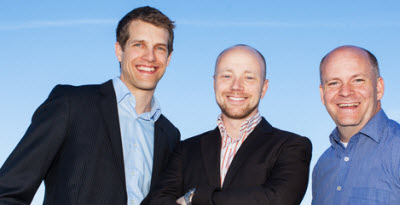 The technology has had a long gestation. It was founded in 2001 by John Elvesjö, Henrik Eskilsson, and Mårten Skogö. Elvesjö got the idea while working at the Royal Institute of Technology.

The company wound up building specialized sensors, or micro-projection systems, which emit structured light at your eyes. A sensor catches the reflection and Tobii uses that to accurately sense where your eyes are looking. It builds a 3D model of your eyes and it also tracks where your head is facing.

The dotcom bubble had just burst, so it wasn’t easy to raise money, but the company managed to sell its first Eye Tracker in 2002. The markets for input devices for people with disabilities and for clinical research have taken off, and the market for eye-tracking with wearable devices is getting started. Tobii estimates it has 75 percent of the worldwide eye-tracking tech market.

The researchers found that the eyes are used to signal intent and interest, guide your actions, aim, express emotions, and more. The eyes can enormously expand the bandwidth for control between a gamer and the game, enabling a player to do a lot more at the same time. That makes the game feel more real or easier to learn.

The possibilities in games are intriguing. Eye-tracking can be used for natural interaction. A shy person might look away or another might become upset if you stare at him or her too long. In a murder mystery, you might be able to look a character in the eye — or the character might look you in the eye — and figure out if you’re guilty or lying.

In a soccer game, you might select a player to whom you want to pass the ball, revealing your intentions in a way that is more precise while you can continue to operate a traditional controller to control a player who already has a ball. But your gaze might also give away your intentions to your competitors.

“The integration of eye-tracking into the game experience is literally a game-changer – not only for the gamers themselves but also for developers,” said Hawver. “Eye-tracking capabilities offer game developers a new, creative approach to game development. It becomes a truly immersive experience for players.”

You can aim at a point on the screen and use a traditional controller to shoot. You can move in a more natural way, like looking around corners or pulling back to hide.

Korobkin said that the company is working closely with SteelSeries but hopes to partner with others over time.

“The response for this technology has been overwhelming,” Korobkin said.

The company is also moving forward on other applications. For instance, if you read an e-book, the eye-tracking might automatically scroll the page down as your eyes move down the page. And it might be able to track how much you pay attention and report back to a teacher how much you absorbed while reading.