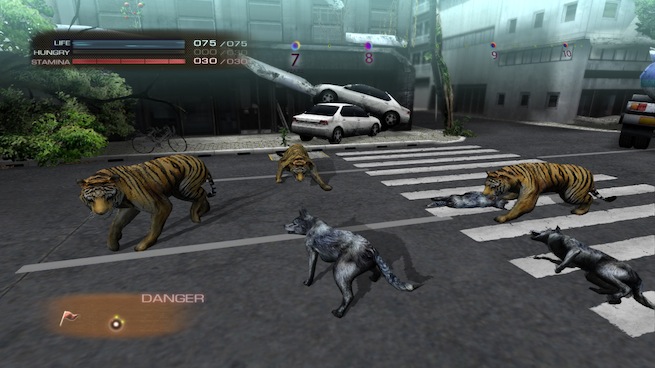 Tokyo Jungle is a game that shouldn’t exist. In such a risk-averse climate where only the top triple-A titles can seemingly turn a profit, no one in their right mind would green-light a project as bizarre as a free roaming postapocalyptic animal-survival simulation. That is, no one but Sony Computer Entertainment Japan, and Tokyo Jungle’s developer, Crispy’s.

Remember that hunting scene from the film I Am Legend, where a lioness takes out a lone deer in an overgrown Times Square? The world of Tokyo Jungle is a lot like that. It’s simultaneously harrowing, funny, and even touching. It plays like nothing else in the market right now.

And it might just be one of the best games of the year.

It’s an interactive Discovery Channel documentary
The goal in Survival mode is to hunt, eat, breed, and die. You age one year for every minute of game time, and death is permanent. How you manage to survive, and the strategies you use, depends on the type of animal you’re playing as — a predator, who hunts other animals for food, or a grazer, who eats plants.

The beauty of permanent death is it really trains you (and a friend, if you play local multiplayer) to pay attention to what works and what doesn’t: My first foray as a spunky pomeranian lasted all but five minutes, thanks to my foolishness in trying to take on a wild boar. When you factor in the environmental dangers — toxic smog, disease, fleas, blistering temperatures, limited visibility at night and in heavy rain — that randomly occur, Survival is an unpredictable experience every time you play.

Role-playing mechanics, as represented by various health bars and animal stats, blend well into this chaotic system. Since some stats pass on to your offspring, the game encourages you to build the healthiest animal you can through successive generations. It’s no small task, as you’ll have to claim territories before you breed, but it feels immensely rewarding once you reach certain milestones, as when I first surpassed 75 years with my pack of jackals.

Containing this madness is Tokyo, a never-ending playground full of collapsed streets and derelict buildings. After over 20 hours of playing, I was still finding new places to explore. Mother Nature’s large, twisted vines “bridge” many disparate parts of the city together, so conquering it feels manageable despite its large size. 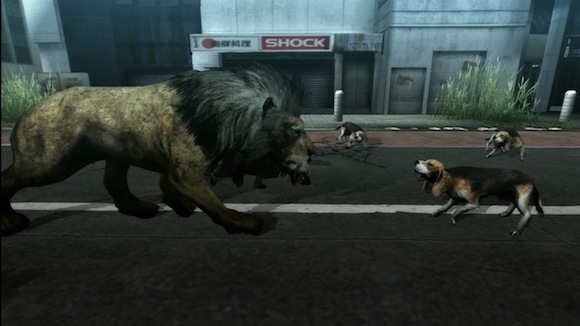 A surprisingly poignant story
Spread across 14 chapters (and a multitude of in-game “archives”), the Story mode is the other half of the game. It’s underwhelming at first, serving as little more than an advanced tutorial. But you’ll quickly learn that each chapter, despite focusing on different animal species, connects with one another. These animals have a sense of personality and humor, portrayed through subtitled dialogue, as they try to adjust to their new urban jungle.

Some chapters focus on the tragedy of losing one’s family, others about slaughtering entire packs of animals to reclaim territory, and one or two thrives on the absurdity of the situation with hilarious anecdotes. It’s when you’re finally nailing down just what happened to the world, and the rest of humanity, where the story mode truly shines. You’ll never guess how it ends.

Rewarding moments
I was ready to give up on Tokyo Jungle multiple times, whether it was because I grew tired of the in-game challenges or angry that yet another hyena ambushed me, killing years of progress. But when I do, the game always manages to reel me back in. Sometimes, this was in the form of a entertaining chapter in the story; more often than not, it came from the chaotic, and unscripted, events that punctuate the Survival experience.

One memorable instance happened when I was playing as a gazelle: As I cruised through the Shibuya shopping district looking for food, a frightened pair of roosters suddenly scattered past me, but I thought nothing of it. Then a pack of wolves appeared in pursuit of their prey, and chasing them were two lionesses; at this point, I had to follow them. All of them converged at the end of a block, where a single alligator happened to be sleeping. When it woke up, the situation turned into absolute insanity as the animals viciously attacked one another. Only the alligator (and me, hiding in the background) got out of that mess alive.

Stealth mechanics from the last decade
While some games may be pushing the stealth genre to new heights, Tokyo Jungle is intent on keeping things the way they always used to be. Stealth is a must if you choose to play as a grazer, since they’re generally poor fighters, and you’ll have to stick to hiding from predators in tall patches of grass or by sneaking past them.

It’s impossible to tell how well you’re hiding: Sometimes, I can stand a few feet away from an animal in a wide-open space but still be completely invisible to them. Other times, as when I was playing a hyena, I carefully crept past a sleeping wolf, who immediately woke up and killed me. The lack of visual information to let you know how you’re doing leads to repeated failure, and it can get to the point of controller-throwing levels of frustration. 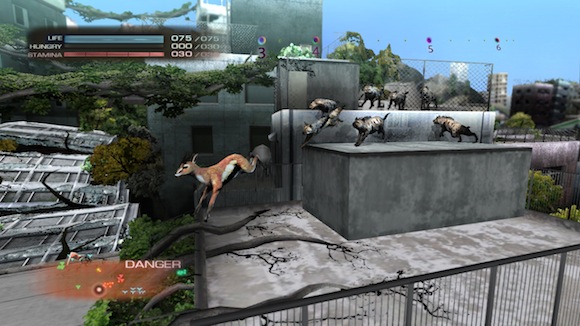 Odd A.I. behavior
For the most part, the nonplayable animals in Tokyo behave naturally, but some quirks in the artificial intelligence can make the game feel broken. When you’re traveling as a pack, your fellow siblings can get stuck in corners or in buildings if you move too fast. And the more sensitive predators can whip into a frenzy over the smallest thing, as when I was traversing through the sewers as a beagle, and a large group of alligators a full story below me picked up my scent and started to jump and snap at me in an endless animation loop.

The A.I is at its worst when paired with the mandatory stealth sequences found in the Story mode. Too much of it feels like it’s left to chance, rather than pure skill.

Atrocious loading screen
Every time you manage to save your progress, die, or begin a new game in Survival, the same five-second video of a broken TV signal plays over and over. I have no idea why it does this, but I suspect that it might be masquerading as a loading screen. It’s incredibly annoying.

For the longest time, I couldn’t decide whether I loved or hated this game. The lack of polish in some areas and questionable design decisions in others can overshadow Tokyo Jungle’s moments of brilliance. As I finished the story, however, I realized I couldn’t stop smiling: It knows how absurd it is, but it doesn’t care. The developers takes the ridiculous concept and runs with it all the way, mainstream tastes be damned. That’s something you really have to admire.

Tokyo Jungle will be available exclusively on the PlayStation Network on Tuesday, September 25 for $14.99. The publisher provided a review code for the purpose of this review. I logged 22 hours across both the Survival and Story modes, completed the campaign, and unlocked about a quarter of the animals.