The latest smartphones from Apple, Google, and Samsung achieve high rates of monetization compared to other kinds of smartphones, according to a study from analytics and marketing platform DeltaDNA.

Edinburgh and San Francisco-based DeltaDNA said that the study found the Apple iPhone X and the latest smartphone models from Google and Samsung are achieving game monetization numbers that are up to 270 percent above the industry average. Players using the newest phones are spending in greater numbers than ever before.

In mobile free-to-play games, DeltaDNA typically sees between 2 percent to 3 percent of players making in-app purchases (IAP), with an average lifetime value (LTV) of $1.50. That’s the average amount of money a spending player spends in an app over the course of time using the app.

However, with smartphones becoming faster, larger and more capable of delivering an engaging gaming experience, these monetization key performance indicators (KPIs) have begun to increase significantly.

“Making money in mobile F2P games has always been a challenging business,” said Mark Robinson, CEO of deltaDNA, in an email. “However, this latest study should make encouraging reading for game publishers and developers as it reinforces the trend that better performing smartphone models deliver more positive game monetization KPIs.” 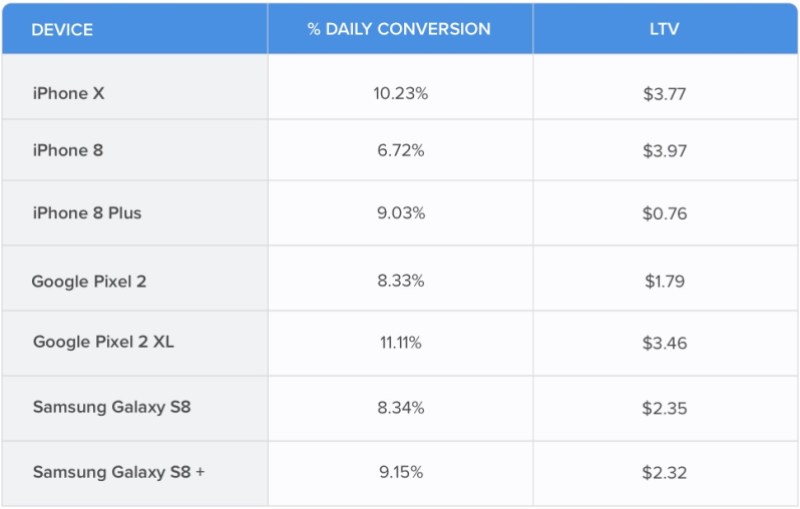 Above: Monetization varies across smartphone types.

The study looked at 1.7 million North American players using iPhone 8, iPhone X, Google Pixel 2 ,and Samsung Galaxy S8 devices. It analyzed both the percentage of players going on to spend money on IAPs each day (percentage daily conversion), alongside the each player’s LTV. The results revealed the KPIs shown in the chart above. The conversion rates for the high-end models were multiple times higher than the average. And the LTV was several times higher as well.

“Of course, the large majority of mobile gamers aren’t using the latest handsets but eventually those handsets will be replaced with better performing models,” Robinson said. “And, with some of the latest Apple and Google devices achieving LTV’s of almost $4 and payer fractions of almost 12%, I’m sure developers will be waiting eagerly for this shift to take place.”