My kid was asking me for a ride to a friend’s house. But I was busy trying to save the Western Roman Empire from eternal darkness. I was doing my duty for Rome, but it was kind of a no-win situation. Sega’s Creative Assembly has delivered another fine addition to its Total War real-time strategy game series, and Total War: Attila is one of the toughest yet in this ancient warfare series.

But that also makes it a good game. In the year 395 AD, you can try to save the divided Roman empire from the barbarian hordes. And after you deal with them, then you have to fight Attila. Of course, there’s a way out of this problem. You can play the Eastern Roman Empire and hope the hordes hit the Western Roman Empire instead. Or you can play the barbarians themselves. Or you can be Attila, the destroyer of civilization, and sack Rome yourself. Total War: Attila will bring out the barbarian in you. There are 10 playable factions in all.

Total War: Attila is sure to be another hit in this series. These games thrive among new fans and history buffs long after they’ve launched. In fact, the Total War games had around 850,000 monthly active players in 2014 even though a new entry in the didn’t come out last year. On average, people play Total War titles for 104 hours per game. The Total War series has been around for 13 years, and The Creative Assembly is now launching multiple offerings based on the same Total War brand. For instance, it recently launched the Wrath of Sparta expansion for Total War: Rome II, and it also announced Total War Battles: Kingdom, a free-to-play realm-building game.

This huge PC game is based on Creative Assembly’s massive strategy game Total War: Rome II from 2013. It uses the same campaign map and game engine, but it has a lot of improvements and a more thoughtful design. The player challenges have been heightened. Not only must you guard your borders, you have to deal with family politics, betrayal by allies, disease, starvation, and bankruptcy. The beginning of the Western Roman Empire campaign starts out with the empire in a state of decline. It has split in two and it faces wars on six fronts.

Total War: Attila resembles Rome II in that it combines real-time combat between armies on a 3D battlefield with the Civilization-style strategic campaign map where you manage your empire. But while Rome II enabled you to take over the known world, this time it’s different. The quality of the 3D graphics is getting better and better so that you can see flames licking the rooftops of a burning city while soldiers are clashing on the ground below. Civilians scream and run in fear, adding to the drama of an attack on a city. The sweeping views of the vast armies, with thousands of soldiers marching toward a citadel’s walls, are still breathtaking.

In these Creative Assembly games, you can zoom out to see the strategic map of Europe on the edge of the Dark Ages. Then you can zoom in on cities and meet the enemy on the battlefield. The armies and landscapes are rendered in beautiful 3D graphics. You can zoom out to get a bird’s eye view of the action or zoom in during the battle to see individual soldiers fighting desperately.

Climate change has forced migrations of the barbarian tribes from the East to the West. Those tribes come crashing like waves on the empire, which has now split into the Western Roman empire, centered in Mediolanum, north of Rome, and the Eastern Roman Empire, centered in Constantinople. The Ostrogoths, the Visigoths, and the Vandals are all showing up as wandering hordes. They flee the million horse warriors of the Huns and collide with the Romans. The campaign lasts about 70 years. After every turn, I was wondering if the fall of Rome was imminent. And I was always happy when then answer was, “Not today.” 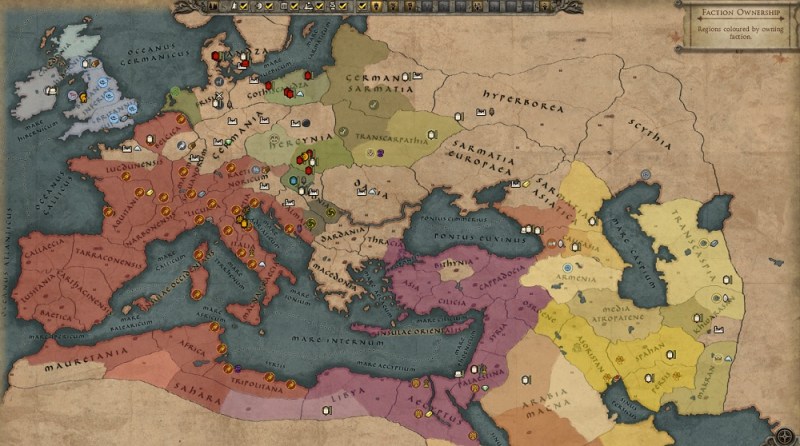 Above: Total War: Attila. The overhead map of the empire in 395 AD.

The Roman empire was an intricate thing, and that’s what makes this a deep and difficult game. Even the Prologue, a tutorial where you learn how to fight and listen to your in-game advisors, was tough. I started out on the normal level, and I ran out of armies and money. The nomadic barbarians won. I had to start over and play on the embarrassing “easy” level. When I played with more resources and fewer imminent threats, I fared much better. But I really wondered if I was going to make it through the first mission, which included five years of nonstop warfare. All of this took me around 48 hours to accomplish.

This is a far different game than Rome II, where your toughest decision was about which lands to conquer first. When you start out, you have around 75 cities to defend and no more than 10 legions or fleets across all of Europe. You have to use those armies wisely. But one thing you may not realize is that your cities actually have large garrisons to defend themselves. Your legions, then, are really available for offensive use in crushing enemies that are rampaging through the empire. In fact, the Roman army was at its peak at this time, with around 600,000 soldiers. But you’ll see how it is stretched so thin.

I had to burn a few of my own settlements in North Africa first, because I felt it was indefensible and I had to give up something in order to raise cash. That was my scorched earth strategy, and I never did lose North Africa altogether, as I defended one province.

Each time you abandon a city, you receive some of its value in your coffers. I invested in three legions to hang onto Britain, where the Picts, the Caledonians, and ancestor of the Irish were all at war with me. To protect my six cities across England, I had to constantly fend off multiple armies from the tribes, and deal with multiple rebellions in my cities. When you raze a city, you see the fire burn on the campaign map and leave a black mark on the terrain. It’s pretty costly to try to bring a city back.

I had fought a truly epic battle for control of Linden against the Caledonians. I sent them back in full retreat. But after a couple of years, they came back with another army. I finally had to march north and take out the Caledonians, the Picts, and the Edlanians. They were really quite pesky, staging hit-and-run attacks on my cities.

Meanwhile, it was really hard to hold on to other territories. I had to try to defend all of Spain against rebel armies with a single legion, and I also had to defend Gaul with a single legion. I brought my legions from North Africa into Italy, and made a strong alliance with the Eastern Roman Empire. The Mediterranean was relatively peaceful, so I started improving the cities there, while the northern frontier was constantly in flames. 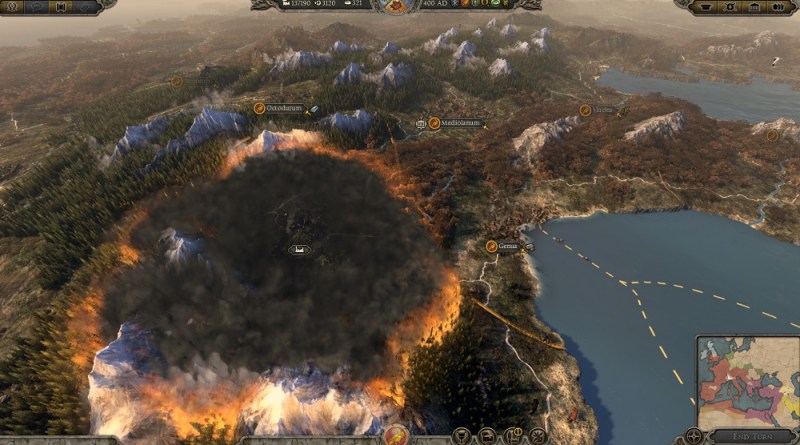 Above: Total War: Attila. The campaign map burns when you raze a city.

The A.I. strikes back

Every time you think you’ve got a handle on your empire, it springs another leak. My problem was keeping a lid on the rebellions. I didn’t have enough money to upgrade cities so that living conditions were better. That stirs rebellion. And you can’t let the rebellions run unchecked, or you’ll get more of them. I faced no less than seven rebellions per turn. And with each pesky rebellion, I had to crush another rebel army. It’s hard to make peace with factions without giving them a ton of money. And that’s as it should be. After all, everyone hates the Romans.

Part way through my campaign to conquer Britain, I discovered that the winters were getting really cold. And my troops were dying when they were besieging the British cities during the winter. It was easy to see where I shouldn’t camp my troops, because the northern part of the campaign map turned white.

But it’s not hopeless. You have to figure out quickly which lands you can hold and which ones you should abandon. You can’t worry about the dishonor of abandoning your hard-won cities, but you do have to make sure your citizens don’t become discouraged by the shrinking empire.

My solution was ultimately military one. I had to spend money upgrading my cavalry stables so that I could create heavy Roman cavalry. Then I had to populate these units into every legion. Once I had armies that could outflank larger forces, my armies were harder to beat.