Rats! The Skaven have been announced as the fourth playable race in Total War: Warhammer II, which is Sega’s fantasy real-time strategy game coming for the PC this fall.

The entry of the Skaven into the strategic mix of Warhammer II is bad news for the other races in the game, which include the High Elves, the Dark Elves, and the Lizardmen. I went to a preview event staged by Sega and its developer The Creative Assembly, and I got the lowdown on the Rat-men race in the game, which debuts on Steam on the PC on September 28.

Led by Queek Headtaker and Lord Skrolk, the Skaven lead a host of monsters and madcap machinery. They breed in subterranean lairs faster than the other races, and numbers are never a problem for them, said Al Bickham, communications manager at The Creative Assembly, in an interview with GamesBeat. They spread pestilence and move in waves against their enemies.

“We’ve got High Elves with their manipulation. The Dark Elves are murderous. The Lizardmen have brute force,” Bickham said. “The Skaven are the most different in their mechanics and how they work with battle than any other faction we’ve worked with before.”

Total War: Warhammer II is the next major real-time strategy game from The Creative Assembly, which has sold millions of copies of historical RTS games. The fantasy-themed original game debuted in 2016, and it was very successful, with more than 1.5 million players according to SteamSpy market intelligence.

Now the question is whether Sega can scoop up additional fans, either from the Total War strategy game camp or the fans of Warhammer. The Skaven might be so easy to play that they could be a good starter race for the brand new players. That’s because they spread fast, breed in a stealthy way, and can overwhelm other units in battle.

Warhammer II features four new playable races across four continents, all divided by a big ocean with lots of dynamic storms. In Total War games, you can manage your armies on a giant continental map, and then you can drill down into individual battles when armies meet on the field. And in those battles, you can send your troops into the fight in real-time, while the enemy does the same. You can even focus the camera on a handful of soldiers in the thick of the fighting. 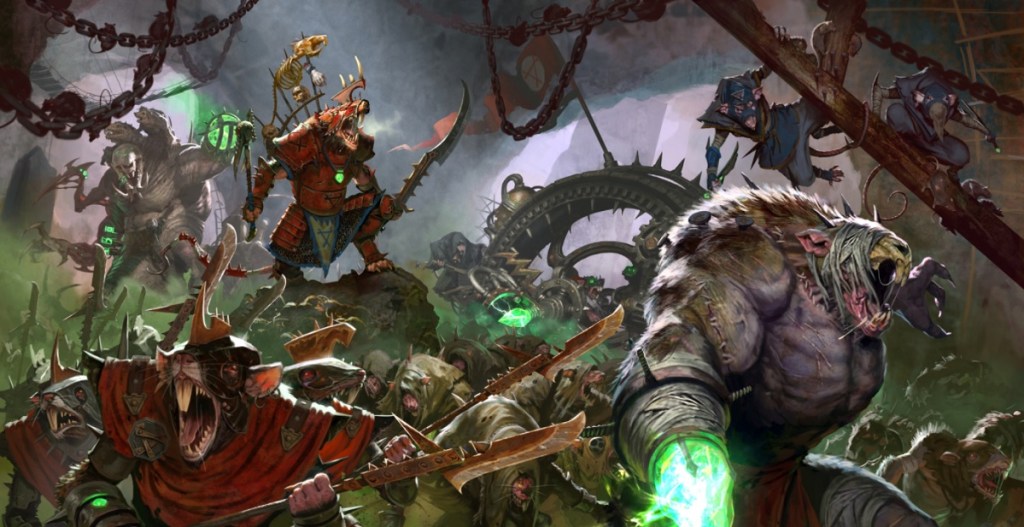 Above: The Skaven fight in a swarm and bring ingenious contraptions.

For more than 15 years, this kind of hardcore real-time strategy game has earned The Creative Assembly some loyal fans. But the Warhammer license has brought in even more gamers, said Sam Miller, leader development manager for Warhammer II, in a recent interview.

As you can tell from the images, the Skaven have low-level grunt rats that do a lot of the dirty work. But they also have contraptions like the rolling wheel, which can turn anything in its way into shreds. And they have guns that spew poison, and other kinds of weird experimental monsters from the underground. We’ll have more information from a hands-on session soon. But I can tell that the Skaven are a faction to be reckoned with, and they could make Warhammer II a lot more fun.