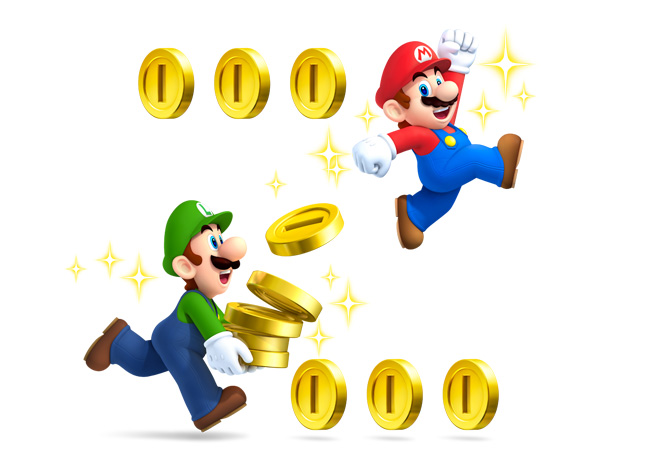 Last year, two Mario games (Mario Kart 7 and Super Mario 3D Land) sold millions of copies and helped increase sales of the 3DS, which was initially having a hard time finding an audience thanks to a high price ($250) and a lack of software. It looks like Nintendo will continue to count on the portly plumbers for the rest of 2012 with these new releases.

The first of these will be New Super Mario Bros. 2, which gamers will be able to purchase through retail or via digital download on August 19th. This is the first 2D Mario game for the 3DS and a sequel to the Nintendo DS hit. Coins, which Mario and Luigi previously collected throughout their adventures for little more reason than to increase their high score, play a much larger role in this platformer. Nintendo wants players to compete against their friends for the best times and most coins collected in a level (this data will be transferred from system to system with the portable’s Street Pass functionality).

To highlight this new emphasis on money-grabbing greed, Nintendo showed of a new power-up ability called the golden flower. This item allows Mario to shoot projectiles that’ll turn almost any object they touch into coins. The sidescroller will also allow two-player co-op across two systems, with the second player taking control of Luigi.

[youtube http://www.youtube.com/watch?v=eO8xe2AUY4c]
Next will be Luigi’s Mansion: Dark Moon, the sequel to the GameCube launch title that saw Mario’s little brother vacuuming ghosts in a haunted house. The new game for the 3Ds will feature multiple mansions and will equip the green-clad Italian with a strobe light to stun his ghoulish prey.

Despite the spooky setting, Dark Moon still features plenty of humor. You can see for yourself in the elevator sequence at the end of the trailer posted below.

Dark Moon will be available on November 18.

[youtube http://www.youtube.com/watch?v=sm_mwNj06Uo]
Paper Mario: Sticker Star, the first portable edition in Nintendo’s turn-based role-playing series, looks to continue the legacy of whimsy and humor the Paper Mario franchise is known for. Interestingly, the game doesn’t reward players with experience points for winning battles. Instead, you can increase your attributes (like health) by completing quests.

Stickers play a central role, as you could probably guess from the title. Almost every action you take in a battle requires one. You can also use the bottom touchscreen to strategical place stickers and solve puzzles. For example, a crying toad upset over the destruction of his garden will give the player a permanent increase to his health if he places a few flower stickers on the ruined plot of land.

Nintendo told the journalists gathered for their press conference that they will release Paper Mario: Sticker Star this fall.