Trion Worlds spent years building its platform for massively multiplayer online (MMO) games. It built a modern and innovative infrastructure capable of handling dynamic events, such as appearance of gigantic enemy that all players could attack at once.

But the company went through its own financial struggles, and then emerged with a new strategy and a new chief executive. Scott Hartsman, the executive producer of Trion’s first online game, Rift, left the company briefly and then returned in 2013 to take over as CEO. His internal teams are still working on titles such as Rift, Defiance, and Trove.

But Trion has also made progress attracting third-party developers who are making MMOs that will use Trion’s platform, such as the ArcheAge title that debuted last year. And today, Trion Worlds is announcing today a new free-to-play MMO title Devilian from South Korea’s Ginno Games. We talked to Hartsman about how he is balancing new intellectual property, internally developed games, and outside titles as well. 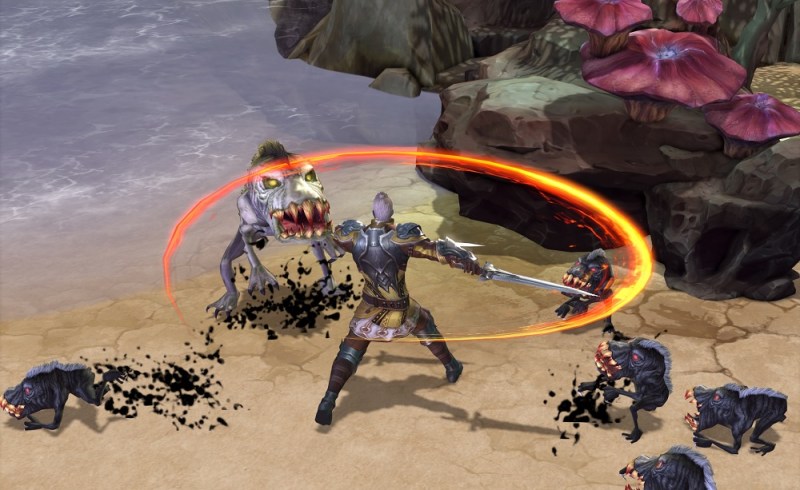 GamesBeat: Investment in new IP, that’s interesting. Not too many folks are making such big bets, especially with MMOs.

Scott Hartsman: A lot of it comes down to the way MMOs have evolved. The general idea of people wanting to play with other people online is still the biggest type of gameplay that exists. It’s only gotten bigger, especially in free-to-play. When you look at the general market of where attention is going in gaming, online is growing. Free-to-play is growing. These are all growing on PC in particular. That’s why we still believe it’s the biggest, best bet around.

Not only are we partnering with more people on their IP, but we still have even more unannounced internal things that we’ll be talking about later. This is still a huge long-term bet for us. As the last year or two have shown, it’s only been growing. It’s been a very good bet.

GamesBeat: For something like Devilian, how does the model work? Are you funding them and working with them over a period of years?

Hartsman: Yes. This is a developer-publisher relationship. They are the developer. They own the IP. We are the partner that helps bring it to a new audience. They continue providing the game. We do things like the localization, the operations, the community management, the storefront management, the microtransaction business model design, the client-facing front end, and the server backend. When we say “publisher” it’s more like what you would call “partner.” We’re the exclusive partner for our territory of 38 countries.

When we did well with ArcheAge last year, more people started reaching out to us. “Hey, you guys did this really well. Can we work together?” We’ve been evaluating a couple of different games every month. The thing that made us pick Devilian was just the quality of the game, the fun. We evaluate a lot of games. Some of them, the fun or the quality isn’t there. But it was also our conversations with the developers. They have the same vision as far as where we think triple-A online on PC should be going.

GamesBeat: What was the origin of Trove?

Hartsman: This is what I love about being an independent company. Trove started out as two guys who had been working on Rift. They had been working on Rift for a lot of years, and they asked if they could go start a passion project. It took them about six weeks, and they put this prototype together. We said, “There’s something there.” The idea of putting a real RPG, with RPG mechanics, into a voxel engine and seeing what results. As they came up with user-generated content to do items and mounts and all kinds of things — They’re over 3,000 pieces of user content in the game now. I’m really glad we’ve done that.

It’s one of the advantages of being our size and being independent. We can do some big bets, and we can do games that start out as a small passion project. Not everything we do has to be a billion-dollar home run for us to call it a win. For us it’s, “What does fun look like? How do we get fun in front of customers?” That’s all we care about.

GamesBeat: How many people are you at right now?

Hartsman: We’re just over 300. We’re in Redwood City and Austin.