Trion Worlds is officially launching version 1.0 of its voxel-based Trove online game world for the PC.

Redwood City, Calif.-based Trion Worlds acknowledges that its blocky free-to-play online game Trove is inspired by Minecraft, the wildly popular 8-bit building title that Microsoft scooped up for $2.5 billion last year. But the company has given Trove all of the proper trimmings as a massively multiplayer online game. It takes advantage of Trion’s infrastructure for MMOs that has been used for multiple games, and it has some features that Minecraft doesn’t have.

Trove started as a passion project for Andrew “Avarem” Krausnick, the game director of Trove, and Adam Hetenyi, its lead developer. They worked on the Rift MMO for years and then pitched an idea to go off and start working on something else. Two years later, they’ve got Trove to show off. The title entered its open beta test in November, and now it’s ready for prime time.

Above: Trove has dragons.

Trove has features such as persistent loot, different kinds of pixellated blocks, and a single shared environment for everyone. You can start out in the main hub world and then split off into smaller worlds. The entire world can be modified as you wish. It is a “sandvox” world.

“We took our expertise in building virtual worlds and applied it,” Krausnicktold GamesBeat. “And we are about bringing new content to the world all of the time.”

The title has fast-paced melee combat and shooting. You can switch character classes if you like and craft your own private spaces within the world. You can go back to locations, known as cornerstones, where you store all of your loot or just explore places that others have built.

You can lead joint missions where you can smash lots of treasure chests and collect loot.

Above: Trove lets you smash open piñatas to get good stuff.

Krausnick and Hetenyi took me on a guided tour of the world of Trove. They found a place built by a musician, who created a music world with blocks made of musical notes. You can speed along through it and make music or do a weird disco dance on a flying-carpet-like device.

In other parts of the world, you can go into a Sky Realm with Sky Hunters. Your characters are highly customizable, and you can level them up. You can change your face, hat, and weapons. You can upgrade those weapons and add special abilities. You can also get a mount to help your character move around quickly.

Trove joins Rift, ArcheAge, and Defiance among Trion’s launched MMOs. Another one in the works is Devilian, which is being developed by Ginno Games in South Korea.

“This is what I love about being an independent company,” said Scott Hartsman, the chief executive of Trion Worlds in an interview with GamesBeat. “Trove started out as two guys who had been working on Rift. They had been working on Rift for a lot of years, and they asked if they could go start a passion project. It took them about six weeks, and they put this prototype together. We said, ‘There’s something there.’ The idea of putting a real RPG, with RPG mechanics, into a voxel engine and seeing what results … As they came up with user-generated content to do items and mounts and all kinds of things — there are over 3,000 pieces of user content in the game now. I’m really glad we’ve done that.”

He added, “It’s one of the advantages of being our size and being independent. We can do some big bets, and we can do games that start out as a small passion project. Not everything we do has to be a billion-dollar home run for us to call it a win. For us it’s, ‘What does fun look like? How do we get fun in front of customers?’ That’s all we care about.”

After Trovethe game launches, Trion will keep adding features, such as player-versus-player combat. 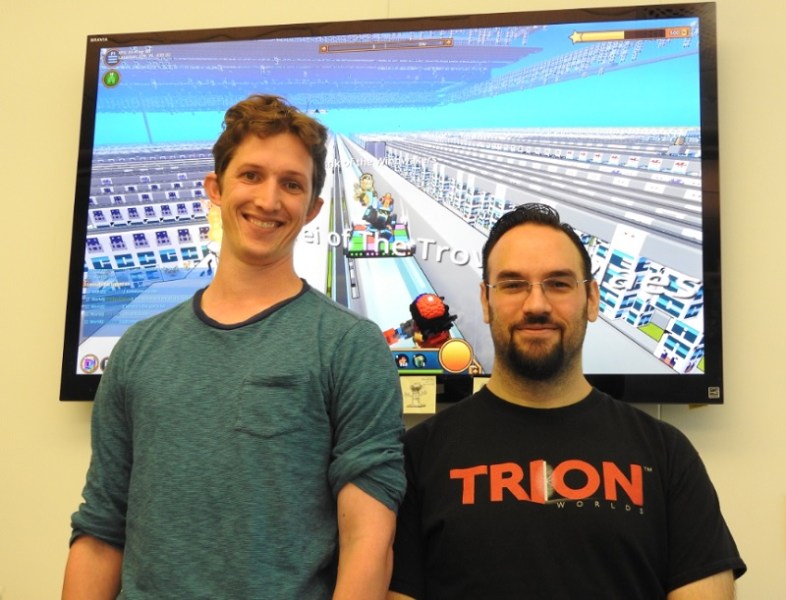 Above: Andrew “Avarem” Krausnick (left), the game director of Trove, and Adam Hetenyi, the lead developer, at Trion Worlds