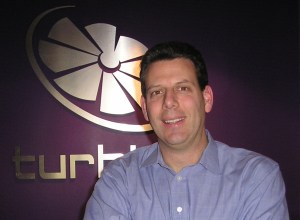 Jim Crowley, the CEO of Turbine, isn’t an easy man to get a straight answer from. I heard that his company, which makes “massively multiplayer online” games such as “The Lord of the Rings Online,” was raising a new round of venture capital about a month ago. That’s a big deal, since Turbine is one of the big success stories in this industry and raising a new round could mean big new projects are in the works at the Westwood, Mass., company.

Adam Mersky, Turbine’s PR man, told me the funding rumor wasn’t true. Then I interviewed Crowley on April 17, where he pretty much said the same thing. His answer was evasive, but it left an opening for the possibility that Turbine had already closed a round.

In any case, on Tuesday, the news broke that Turbine has indeed raised another $40 million in venture capital to fund its online computer game business, according to a report by peHub. The round was led by Granite Global Ventures and included Highland Capital Partners, Polaris Venture Partners, Tudor Ventures and Columbia Capital. To date, the company has raised more than $90 million.

Mersky still declines to comment on the funding. But I leave it to the reader to surmise from my Q&A with the secretive Crowley to figure out what Turbine is going to do with all of that money, if, in fact, the filing dug out by peHub is true.

From what I see, here is a logical theory. Turbine has raised $40 million, partly to expand the Lord of the Rings Online around the world more quickly; Crowley says the Asia expansion alone will bring millions of subscribers to that game. Turbine also wants to fund the expansion of properties like Dungeons & Dragons Online, which on its own isn’t generating enough revenue to fund expansion. And then the company has a couple of more secret projects in the works. My guess is that they’re going to do a console MMO game based on The Lord of the Rings Online. Taking the MMO to the consoles would be a big deal and would help it compete head-to-head with console MMO rivals such as Sony and NCSoft. But take a look at Crowley’s words and judge for yourself. 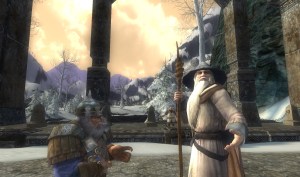 What’s the latest at Turbine?
JC: Our technology has been pushing the envelope. We are operating three worlds today. Asheron’s Call. Dungeons  & Dragons Online. And the Lord of the Rings Online. We are operating in 50 countries now with our worlds. We are growing like gangbusters on every dimension that you could possibly imagine. We are very focused on the topics of accessibility and distribution. That is both on how we can expand access to the worlds to more players and expand our markets. We are focused on global expansion. We are expanding the portfolio. There are things we can’t talk about there but there are lots of exciting things going on.

VB: You guys said you are not raising a round now. I initiated this call because I heard you were raising a round.
JC: One of the great things about Turbine, and one of the most exciting things about Turbine, given our success, we have a tremendous number of people who seek to partner with us, whether it be IP owners, or financial sponsors and or traditional VC firms. As a result, we have a tremendous amount of flexibility in avenues we may choose. At this specific time we are not out chasing money. I don’t expect to be in the near future. We had a lot of success in our past. We have had a lot of things that we have concluded that we have not yet made public.

VB: I had heard there were a couple of unannounced projects. Have you spelled out how many?
JC: We do have some unannounced projects. We have not articulated those yet, with the exception of the announcement of the Moria expansion to Lord of the Rings Online. We have a couple of more announcements as the year goes on. It’s very exciting in terms of expansion of our IP portfolio and geographies.

VB: What are some of the rules of thumb about MMOs and how many subscribers do you need to keep something above water, or profitable?
JC: It’s a great question but a very difficult one to answer. You have light MMOs, heavy MMOs. It’s a multi-dimensional analysis because the worlds live and breathe and move forward. You can’t have a world right side up economically if you don’t have the world dynamically continue, in terms of continuing to produce content for it. At Turbine, once a world launches, we generate a tremendous amount of new content. We are in constant publication mode. Going back to our announcement of Moria, you will see that happen every fall for Turbine from now until eternity. 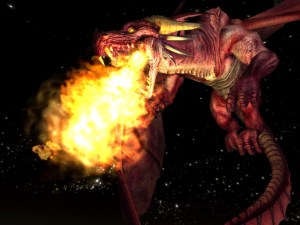 VB: How do you co-exist in an environment where World of Warcraft has so many subscribers?
JC: They have done an amazing job. It’s an incredible franchise. But it is ahead of us chronologically and geographically. You have to watch what happens. We haven’t launched in Asia yet. You will see incremental millions of players in the world as we hit Asia with Lord of the Rings Online. We are very comfortable where we sit.

VB: Do you think the success from Lord of the Rings Online will allow you to keep adding other new IP?
JC: It’s not I think. I know. Lord of the Rings Online has been a spectacular success in the market for this organization. We are one of the only companies simultaneously operating three worlds in the market with a rich robust content update pipeline for each of those. We have back-to-retail initiatives. We are fortunate in our ability to partner with a number of folks. We will make those announcements when we are ready.

VB: So your next major release is South Korea for Lord of the Rings Online.
JC: Yes. That will happen this summer or fall. We’re incredibly excited. We think it will be spectacularly successful. I was there a month ago with a closed, private session with a number of folks who came from around the country for a sneak preview. It was a blast.

VB: How do you look at the consoles as MMO platforms?
JC: I do.
VB: What more would you say about that?
JC: Console platforms? I do see them as viable. A good way to look at them is through geographic slices. In South Korea, the console is non-existent there. Mostly for cultural reasons, the PC is the platform there. Here in the West and in Japan, consoles are huge as platforms. People like to play games on their couches. Both PCs and consoles have unique challenges in terms of the interface. But all are solvable problems. A lot of people want to play consoles on the couch and it is incumbent on us to enable that. 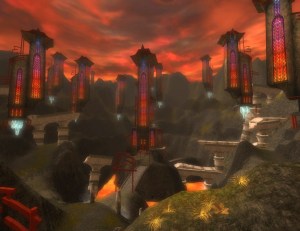 VB: What will happen as MMOs become much more mainstream or casual than they are now?
JC: We listen to our fans and players. Each world is bounded by the IP and story arc that is there. The more community that happens within the world, then things start to take off on their own. We work hard on unique technologies such as user-generated content and user-generated game play in the world. The people will drive the worlds on their own over time.

VB: What do you think of Bobby Kotick at Activision saying that someone taking on World of Warcraft would have to spend $1 billion?
JC: Everyone is entitled to their own opinion. Turbine is on an incredible growth path. We are not even close to being in the number of markets that we’ll be in during 2008 and 2009. We have a number of new IPs. I don’t know if it costs $1 billion or not. But I know Turbine is confident about where it is going and how it is getting there.

VB: Is there some mystery about whether Electronic Arts will go forward with the Lord of the Rings: The White Council online game?
JC: I don’t know. What EA does is their business. We are the de facto Lord of the Rings Online around the world. That’s where we are. I’m not sure what they are doing. It’s not clear to us. We are excited about are the incremental films out of new line that are based on “The Hobbit.” That was announced earlier this year, slated for 2010 to 2012. That is going to be a great impetus for our world.

VB: When I talked with NCSoft in the past, they hoped that the MMO market would expand beyond the fantasy genre. Will sci-fi or other genres take off?
JC: Part of that is the definition of fantasy. Eve Online is unique and fascinating as a space-based fantasy. You will see MMOs open up. But the real trick in growing the market is one of accessibility. That is what we focus on at the moment. MMOs have been built by technical folks for an audience on upper end of the technology curve. You have to go through downloading and patching exercises. It’s a steep learning curve. As one removes those barriers, you change the equation. As you remove speed, learning, platform concerns, the number of people who would play these immersive worlds expands dramatically.

VB: Do you have any advice for your neighbor Curt Schilling (who started his own fantasy MMO studio, 38 Studios)?
JC: On baseball? There is no advice. It’s more of a welcome. The Boston area has become an explosive game center. We have Turbine and Curt’s 38 Studios. A number of other shops growing and maturing. I think it’s great. It’s more robust, a destination location for people any number of people who want to be in the industry. They are a great neighbor. I think Curt is a damn good pitcher and I am glad he is on the Red Sox.