Entertainment Software Rating Board ratings have changed over the past 20 years — but as little as possible.

I spoke with ESRB president Patricia Vance on the eve of the board’s two-decade anniversary. It’s been a difficult balance, she said. “What we try to do is keep up with cultural norms, but what makes our system credible and trustworthy is consistency.” 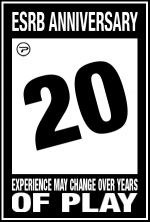 The voluntary board has rated more than 21,000 retail games since it gave its first grades 20 years ago today — nearly 38,000 counting digital and mobile — and things have gradually changed, she said.

Those first rated titles included Doom for Sega 32X (M/Mature), Pitfall: The Mayan Adventure for Super NES (T/Teen), Super Punch Out!! for Super NES (K-A/Kids to Adults), Sonic Triple Trouble for Sega Game Gear (K-A), and Donkey Kong Country for Super NES (K-A). Those categories have changed over the years — some children who are in the intended audience for E10+ (Everyone 10 and up) games have barely lived in a time when that rating did not exist — but the overall standards have adjusted as little as possible, she said.

“We’ve adjusted somewhat, but not as much as the film industry,” Vance said. The organization might rate some of those early games appropriate for more audiences today, she said, thanks in part to the extreme pixelation of the images compared with today’s hyper-realism. “Clarity and sharpness of image have become part of our standards.” 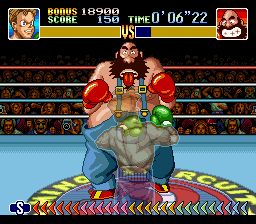 Above: Super Punch-Out was one of the first games rated by the ESRB, earning a K-A (kids to adults) rating.

Vance said the agency conducts market research to make sure the ratings are still consistent with what people expect. That results in some minor changes, such as the use of blood in the Teen category. Once it was forbidden; now it must be static and not gratuitous, she said.

“Any adjustments are subtle,” she said. “We stand by all our ratings, no matter how old they are.”

The language and suggestiveness the board rules appropriate for each age group has stayed largely the same.

Other countries have different standards, which is what makes current international efforts by the ESRB so interesting. A collection of game rating organizations from around the world have collected to create a single online questionnaire that developers can use to receive ratings from all regions at the same time.

The end rating is not the same, Vance says, because cultural norms are different in different parts of the world. But a developer only has to apply once to get their ratings for this country, Brazil, Germany, and other parts of Europe.

“It’s quite revolutionary,” she said. “It gets nuanced. Our challenge was to streamline the form. A lot of people made compromises. We’re sensitive to each country’s specific criteria.”

The form, which is undergoing an update, asks developers to answer 10 basic questions, then opens up with more queries depending on the answers to the first 10.

Some questions are in the form for a specific country: the use of swastikas, for example, will affect a game’s rating in Germany in a way it does not here. A game might be appropriate for wider audiences in other markets than in the U.S. depending on sexual content. And different countries slice their audiences in different ways. 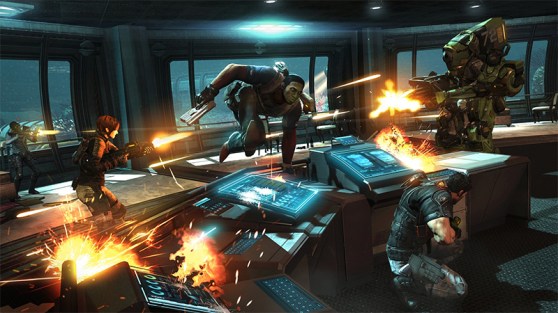 Above: Different countries rate games differently. Fuse, from Insomniac Games, earned an MA 15+ rating from Australia; an R16 from New Zealand; an 18 from PEGI in the European Union; and an M (17+) rating from the ESRB, for example.

“I don’t think there would ever be a universal global rating,” Vance said. Among other reasons, this country has the First Amendment right to free speech, which is unique, she said. Governments run most other ratings agencies and have the right to censor content.

“I don’t see a time when you’d have one global rating that would be effective and recognized. I think it’s really about making sure that tools are available for parents across the board.”

Other changes to ESRB ratings over the years have been the result of new technology. Online play resulted in a generic warning about content, she said. Now, the agency is tracking the types of online engagement a game offers and requires and is considering more detailed information for parents. Does the game allow you to share things you’ve created with other players? To play them head to head? To chat while playing?

“Those are the things that are increasingly important to be clear about up front,” Vance said. “As we develop these interactive elements out, they may change. Now we find ourselves needing to go beyond those lines [of basic description]. I can envision a future where we become more specific.”

The agency has worked hard to make ratings fast and easy for developers, she said, especially on newer platforms such as mobile. Originally few mobile games carried an ESRB rating. The organization launched a program that made them relatively quick and free — now many games come with the familiar badges, and the ESRB uses an app itself to help parents get more information about games while on the go.

“There’s no reason why an indie developer shouldn’t get an ESRB rating now,” she said. “We’ve really tried to exploit new technologies as we’ve gone along. It’s a challenge to keep up with an industry as dynamic as the video game industry, but I think we’ve done pretty well.”

What hasn’t changed is the basic process for rating a boxed retail game. A panel of testers assign video game ratings based on footage provided by developers, typically ranging from 45 minutes to two hours in length. The raters discuss the content and arrive at a score.

They’re trained by the ESRB on criteria and what ratings games have received in the past. Incentives, reward systems, controls, intensity, frequency of types of content, are all part of the formula.

“The fundamentals haven’t changed,” Vance said, even though the organization now employs 30 full timers, mostly as raters, plus a part-time staff. “It’s about human judgment calls.”