In Twin Mirror, the latest narrative game from Dontnod Entertainment, you play as a journalist whose mission is to uncover the truth. When it leads to something ugly, your job is to decide how much of the truth to tell.

Dontnod Entertainment has tackled numerous issues in its story-based games, including teen suicide, immigration, racism, transphobia, and alcoholism. With this story, a journalist investigates his best friend’s death at the request of the character’s daughter, who finds the death to be suspicious. And (spoiler alert) it leads us to a discussion about the opioid crisis. The game debuted this month on the PlayStation 4, Xbox One, and Epic Games Store on the PC and is an example of how Dontnod is spreading out beyond the Life Is Strange series.

The themes Dontnod tackles are serious subjects for any video game, and the French game publisher has made its experiences more entertaining with game mechanics such as time rewinding, which allows you to unwind decisions and see what might happen if you make different choices. Characters also have supernatural powers, like telekinesis, mind control, persuasion, and danger-sensing. But what makes the games relatable for audiences is that they’re populated with grounded and ordinary characters who suffer from problems like anxiety, low self-esteem, and social alienation. And the decisions you make have a “butterfly effect,” which means small choices lead to big changes that alter the characters’ fates.

Editor’s note: This story has spoilers.

Twin Mirror capitalizes on the returning home formula with its new psychological thriller. Main character Sam Higgs returns to his fictional hometown of Basswood, West Virginia as a tortured soul. He had left Appalachia two years earlier, after writing about a dangerous mine that was the economic lifeblood of the town. The mine closed, throwing a lot of the townsfolk out of work. Many people blamed the messenger, so Higgs left town. While he thought that was the best move at the time, he finds that his departure left ripples in the community. For the player, this game tests the idea of whether you can ever “go back” to who you once were. And Dontnod tells a story in which the inward journey is just as important as unraveling facts in the real world. For me, the idea that a journalist can be a tortured soul feels realistic, and it’s also a bit of a relief to view a journalist as a hero, rather than an enemy of the state. 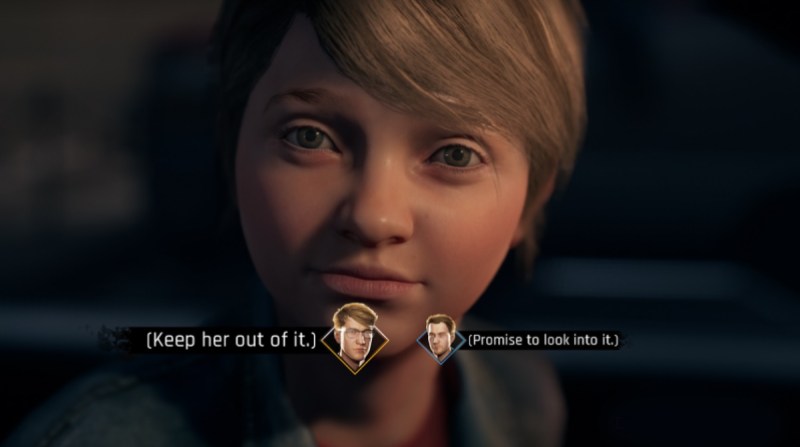 Above: Dontnod faces choices of its own.

In a flashback within his “mind palace,” Higgs remembers how he had proposed to his girlfriend Anna, who turned him down, saying she had already told him marriage wasn’t something she wanted in life. As Higgs replays his memories upon returning to the town, we see the scene play out in the visualized dreamland of his memories and subconscious. He has conversations with an alter ego, a kind of twin, who helps him make decisions. The mind palace is where Higgs works out his feelings and logical problems, a place that helps him notice connections other people miss. It’s a place he goes to when he needs to figure things out, and we experience it as a 3D scene in the clouds. This is where the story turns more supernatural.

After Higgs left town, Anna hooked up with his best friend Nick. Two years later, Higgs returns to the town filled with emotional dread to attend Nick’s funeral. As he arrives at the bar for Nick’s wake, he runs into Nick’s daughter, Joan “Bug” Waldron, who suspects Nick was murdered. Joan tells Higgs she was hurt that he abandoned her and stayed away so long. She asks Higgs to investigate, and he promises to do so. But Higgs finds that no one wants to consider the topic of murder at the wake, and Anna is among those who don’t want to talk about it. Higgs winds up drinking too much, presumably with one of the former miners who still has a grudge against him. A police officer named Declan breaks up one of the fights, but Higgs gets into it again later on. The next morning, Higgs wakes up from a nightmare and finds his shirt in his motel bathtub, drenched in blood. He can’t remember anything. That’s where we learn that the mind palace can be a place of great emotional fear for Higgs, and his alter ego twin has to talk him into some kind of peace of mind.

Higgs returns to the bar in the morning and sneaks in. He examines the evidence of a brawl, and it’s a lot of work for the player. You can’t leave the scene until you find all of the right facts and can then use your mind palace to reconstruct what happened in the bar. The mind palace visualizes what happens in the fight until Nick is satisfied he has a theory that fits the facts. Higgs starts asking questions around town, which leads him to the body of a journalist at the town newspaper’s office — the same place where he worked with Nick and Anna. Higgs begins to sense a cover-up and finds evidence that Nick was chasing a big story. 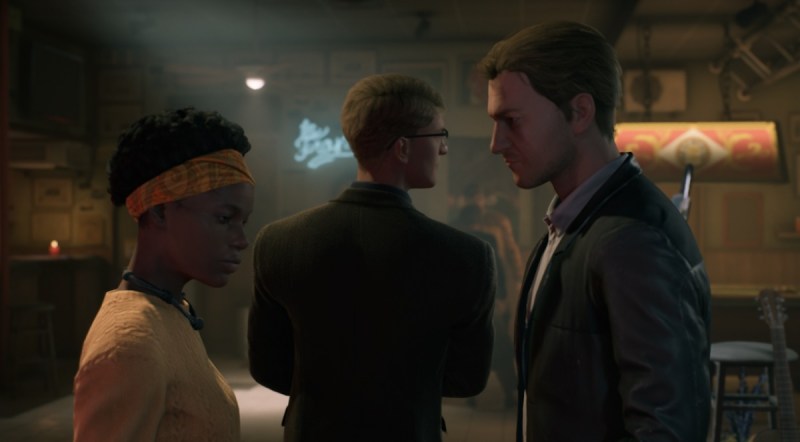 Above: Twin Mirror is the next game from Dontnod. Sam Higgs is on the right.

While this is happening, was learn more about Higgs’ personal troubles. He feels a lot of guilt about having left the town and written the story that brought down the mine. While part of his brain is logical, another part is emotional, and we witness his distress. It doesn’t help that many people in the town don’t like him and don’t want him asking questions. He convinces Anna that something is wrong, and they revisit the scene of Nick’s death, where he supposedly lost control of a car on a winding forest road and crashed into a tree. As the player, you have to find the facts and unravel what actually happened.

This scene is where the gameplay begins to shine and the stakes get more interesting. But Higgs has to conquer his demons in the mind palace and put his mind to work. His task is to gain perspective so he can view the facts and figure out what actually happened. Higgs ultimately succeeds in uncovering the secrets of Basswood, delivering catharsis to some and pain to others when he unveils what happened. When the final confrontation takes place, we see how the mind palace can help Higgs anticipate what’s going to happen and stay one step ahead. And when he finally solves the case, we learn how this story fits in with Dontnod’s statement about the opioid epidemic. In that respect, the game is another example of how Dontnod is willing to wade into the politics of the real world to deliver an ethical message about our reality through a work of fiction.

The full game lasts about eight hours and is told with empathy for Higgs’ mental anguish. If it were simply a murder mystery that he could unravel as dispassionately as Sherlock Holmes does in his tales, it would be quite short and uninteresting. But Higgs has to overcome his emotional turmoil and come to terms with himself before he can solve the crime. I like how Dontnod pushes the emotional boundaries of games and gives us stories that help us cope with our own difficulties in the real world. And I liked how Higgs becomes a different person through his journey to solve the crime.

Not everything about the game is great. There are boring parts, where you’ll wonder why you’re searching for that final clue. While the West Virginia setting is beautiful, the human animations aren’t perfect, and the action is pretty slow. Critics of “walking simulator” games should stay away, especially if all you want from a game is action. If you’re a fan of Dontnod games, however, this one is worth picking up. The game will be compatible with the PlayStation 5 and the Xbox Series X/S.

Dontnod provided GamesBeat with a copy of the game on the PC for the purposes of this review. Our coverage remains objective.