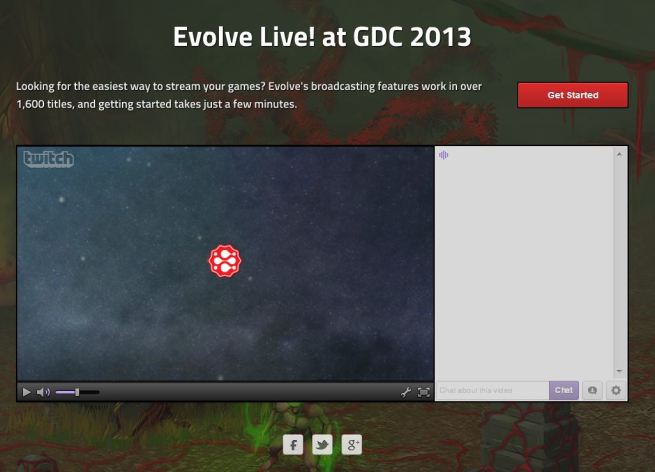 The two companies will begin broadcasting live on Twitch and on Evolve’s own website tomorrow through Thursday. The streaming shows will air from 12:30 p.m. to 4:30 p.m. Pacific each day.

Evolve plans to cover major games and news from GDC, and it will even stream a live Dota 2 match featuring Journey designer Jenova Chen.

This isn’t the first partnership between the two sites. Evolve recently added Twitch functionality to its PC desktop software. Gamers were already using Evolve to track achievements, gameplay hours, and friends — now Twitch provides those gamers a way to beam gameplay directly to others with the press of a button.

“Evolve is the right kind of partner for us as we continue to extend Twitch’s reach into every conceivable gaming environment,” Twitch chief executive Emmett Shear said in a statement. “Being able to broadcast any game using Evolve and then sharing this with a myriad of game developers and publishers at one of the largest gaming conferences in the world is the perfect stage.”

This is the latest in a series of similar partnerships that Twitch has made in recent weeks. In addition to Evolve, Twitch has similar integration features with the Raptr gaming network. It has a dedicated app on the upcoming Ouya Android console. It has one-click livestreaming support in the first-person online game Firefall. Activision added Twitch support in Call of Duty: Black Ops II.