On an average week, Twitch reaches more viewers than the combined audiences of Tosh.0, Breaking Bad, and the National Football League’s exhibition season.

Twitch went huge in 2013, and it isn’t above bragging about it. The livestreaming company, which enables gamers to broadcast video of their gameplay to the web, released a ton of data about its performance last year to help illustrate just how big it’s become over the past 12 months. In addition to outperforming some of the biggest television broadcasts in the U.S., the company compiled a list of indicators and data to show just how popular it is with gamers, which you can check out here.

“We wanted to take a step back and look at what happened last year,” Twitch vice president of marketing Matthew DiPietro told GamesBeat. “It was fun to just sit down and look at the calendar of what we did last year.”

DiPietro pointed out that in January 2013, the site had around 25 million unique viewers. By the end of the year, the site averaged 12 billion minutes watched per month. That’s across 6 million monthly video broadcasts and 45 million unique monthly viewers.

Twitch also did some research and found that its average viewer is 21. More than half of those viewer spend 20 hours each week watching Twitch, and 68 percent are watching less TV. 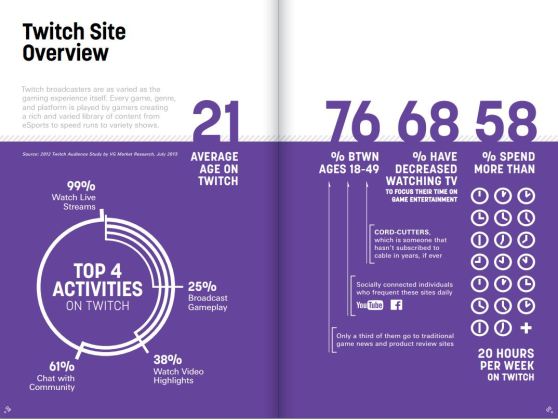 Above: An overview of Twitch’s performance in 2013.

Twitch’s growth is due in large part to the number of features the company released in 2013.

“Our first announcement in 2013 was to launch in-game integration with Black Ops II,” said DiPietro. “That was in January, but it seems like it was forever ago.”

It likely seems that long ago to the people working at Twitch because they have launched so much since then. In February, the site introduced Turbo, its premium subscription model. In May, the Twitch viewing app went live on Xbox 360.

In the summer, Twitch released its API so developers can add Twitch streaming to their games, and the Microsoft revealed Xbox One would feature native Twitch functionality. In August, Sony revealed PlayStation 4 would do the same. 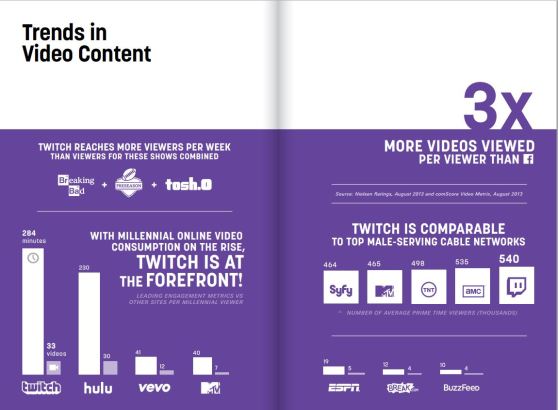 “I think 2013 exceeded our expectations,” said DiPietro. “Since the very beginning, since we launched in June 2011, the growth that we’ve experienced has surprised everybody.”

While 2013 was a year jam-packed with milestones and feature launches for Twitch, the company doesn’t plan on slowing down in 2014.

“Our CEO Emmett Shear, he’s not one for sitting back,” said DiPietro. “I wouldn’t expect us to slow down at all.”

The site has already reached 1 million unique broadcasters this month. That is largely due to the PlayStation 4, which can natively stream content with the press of a button. That functionality is coming to Xbox One “soon,” according to both Twitch and Microsoft.

Twitch’s 2013 report includes a lot more info. Including the top games (League of Legends and Dota 2), the surprising top search trends, and more. Check it out on Twitch.tv.

Twitch is a spin-off site of Justin.tv, which enables users to stream general content. It competes with Livestream.com and Ustream.com, although neither of those companies has embraced the gaming community like Twitch.