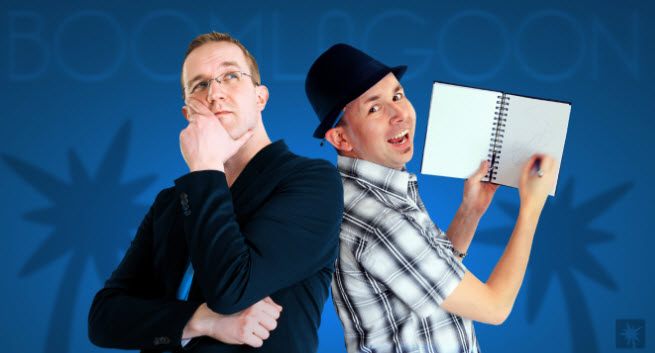 Angry Birds has become a worldwide phenomenon with more than 700 million downloads. So it’s no small event when two of the leaders who created the mobile game leave the nest at Rovio to form their own game studio.

Antti Stén (pictured left), the lead server architect for the original Angry Birds, and Tuomas Erikoinen (pictured right), lead artist, have left Rovio to create a new game studio called Boomlagoon. Successful creators striking out on their own and trying to do some original work doesn’t seem surprising, especially when their former employer seems content to continue to exploit an existing franchise.

“We know a thing or two about successful games and high volumes, and we’ll use this knowledge to spawn something very cool and new,” Stén said.

Stén is chief executive while Erikoinen is chief creative officer. Both men played important parts in the creation of Angry Birds. Stén was responsible for building the server infrastructure to support millions of mobile users. Erikoinen was the lead artist for Angry Birds, Angry Birds Seasons, and Angry Birds Rio, and he supervised the production of Angry Birds Space. During the time they worked on the projects together, Rovio grew from 12 people to more than 300.

They’ve dreamed about running their own company for a long time. The idea started during a poker game, and they discussed it once again over a drink. So far, the team consists of just the pair of founders, but they plan to hire more people. Stén refers to himself as Mr. Plan and to Erikoinen as Mr. Action. They want to create “convivial and intriguing” games.

“Through our experience of seeing multiple startups, we’ve gained the necessary skill set for founding and running a company with high values on all departments of the company,” Stén said. “Our core skills are in game development, but we’ve also had the opportunity to study fields such as PR, branding, recruitment, business negotiations, leading teams, HR, and networking.”

Their goal will be to create games for just about any device, both for the web and for mobile platforms. They will start with HTML5, the new lingua franca (working language) for the web. Their studio will be in Helsinki, and they have not raised any money yet. They are looking for potential investors.

“If we play our cards right, we just might end up with the next Angry Birds,” Stén said.